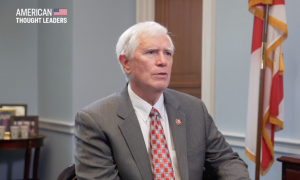 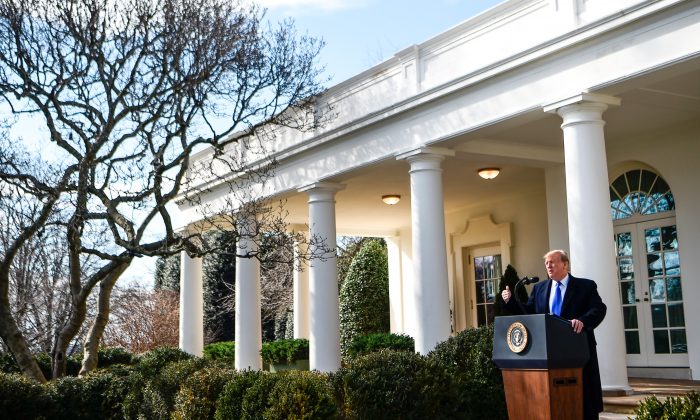 President Donald Trump announces that he will declare a national emergency in order to build a barrier on the U.S.–Mexico border as he delivers remarks at the White House on Feb. 15, 2019. (BRENDAN SMIALOWSKI/AFP/Getty Images)
Viewpoints

Not since 2016 have so many people drawn comparisons between Adolf Hitler and President Donald Trump.

The declaration of a national emergency to fund the border wall, some claim, is just an excuse to grab dictatorial powers, as Hitler did after the Reichstag fire in 1933. This is a serious charge and one that citizens ought to weigh carefully.

Of course, this declaration shouldn’t be a surprise. Even before Trump was elected, he voiced his opinion multiple times that the border crisis constituted an emergency. Everyone knew this was his opinion. They voted for him anyway. But they also continue to consent to the Constitution, with its separation of powers, and also to rule by elected representatives who swear an oath to defend the Constitution as they understand it.

This raises the question: Is Trump’s declaration of a national emergency to fund a border wall a threat to the Constitution?

Is Trump Aiming to Be Tyrant?

Liberal pundits surmise that Trump plans to use this emergency declaration to enact some devious plan to overthrow the U.S. regime and make himself an all-powerful tyrant. Slate magazine asserted that “it is hard to imagine a clearer piece of evidence that he really does seek unconstitutional powers.” The Atlantic beckoned its readers to imagine a sensational scenario in which Trump uses this declaration to give himself tyrannical powers to stymie political opposition and win re-election. And The New York Times called it “a breathtaking display of executive disregard for the separation of powers … Congress, the Constitution and the will of the American people.”

But what did Trump actually say? Can anyone imagine a tyrant establishing his tyranny by saying: “We will have a national emergency, and we then will be sued. And they will sue us in the 9th Circuit, even though it shouldn’t be there, and we will possibly get a bad ruling, and then we’ll get another bad ruling. And then we’ll end up in the Supreme Court, and hopefully, we’ll get a fair shake, and we’ll win in the Supreme Court.”

If he’s trying to be a tyrant, he’s a bad one. Incredibly, federal judges have blocked Trump’s actions 30 times in two years (Obama was blocked, on average, only 2.5 times annually), and Trump has submitted to every injunction that has been upheld. This isn’t a man trying to overthrow the Constitution; it’s a president trying to use every ounce of power he believes he has under the Constitution, and he believes he is duty-bound to do so.

The Only Legitimate Fountain of Power

The important question, though, is obvious: Is Trump’s understanding of the constitutional power of the executive branch right in this case? The legality of the question is absurdly complex. Thankfully, though, free men don’t have to hang their entire fate on a judge’s ruling. We live in a republic, and our founders gave us republican remedies to resolve questions of possible abuse of power.

James Madison wrote in The Federalist that “the people are the only legitimate fountain of power.” He added that, although our Constitution provides important “auxiliary precautions” in the form of separated branches of government, “a dependence on the people is, no doubt, the primary control on the government.”

There are, in our Constitution, two modes for correcting abuses of power: 1) impeachment, through the people’s representatives, and 2) elections, through the people themselves. One way or another, the people will decide the legitimacy of Trump’s declaration. It is their border after all.

This isn’t the first time the people have decided the issue of a constitutional crisis. In 1798, a Federalist Party-controlled Congress passed, and President John Adams signed, the Alien and Sedition Acts. These laws were an attempt to prevent the press from spreading sedition and to grant the executive branch the power to deport and imprison foreign visitors it believed to be a threat to the regime. These laws were thought necessary to hinder dangerous influence from revolutionary France, with whom the United States was on the brink of war.

Thomas Jefferson—vice president at the time—and James Madison believed these laws were unconstitutional. They responded by seeking to galvanize public opinion against the laws. Working secretly through other agents, they composed resolutions for the state legislatures of Kentucky and Virginia. These states passed those resolutions, declaring their opinion that the laws were unconstitutional. Seven other states responded by passing resolutions disagreeing with Kentucky and Virginia, even denying that states had a right to speak to the constitutionality of a law.

By the nature and scope of the disagreement, it was a constitutional crisis. The effect, though, was that a national conversation took place that put the differences between the Federalist and the Jeffersonian–Republican parties in stark relief. The next year, there was a presidential election, and the people swept so many Federalists out of office that Jefferson called it “the revolution of 1800.”

Trump has initiated a national conversation about immigration and sovereignty. As in 1798, we have an election coming up, and the people will again make a monumental choice. Also as in 1798, the difference between the choices is becoming stark. Democrats ought to be happy about this emergency declaration for the same reason that Republicans are happy about the Green New Deal; it is clarifying. These acts make it very easy for the American people to see what their choices are in 2020, and that’s a really good thing.

In the hysteria surrounding this emergency declaration, let’s not forget the more important declaration, the one that asserts that truly “just powers” are derived “from the consent of the governed.” The real sovereign of the United States is not the president, Congress, or the Supreme Court; it’s the constitutional majority.

Let all branches of government exert their powers to the fullest extent of their constitutional duty—as best they understand it—and let the sovereign people sort them out. Trump’s emergency declaration isn’t destructive to the Constitution; rather, it shows that the Constitution is running on all cylinders.