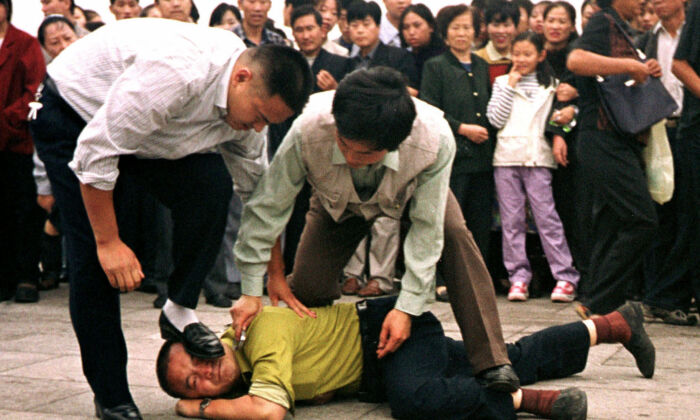 The Myth of Human Rights With ‘Chinese Characteristics’

Less than a year later, on Oct. 1, 1949, Chinese Communist leader Mao Zedong declared the creation of the People’s Republic of China.

In 1947, as preparation for the drafting of the UDHR by the U.N. Human Rights Commission, the U.N. Educational, Scientific, and Cultural Organisation (UNESCO) conducted an international enquiry into the origins and philosophical foundations of human rights.

China’s response to the inquiry was titled “Human Rights in the Chinese Tradition” and came from Lo Chung-Shu, a professor of philosophy at the West-China University, Chengdu, Sichuan, who was also a special consultant for UNESCO.

Lo explained that China did not have the Western concept of human rights declared by political constitutions, but the Chinese people did claim and enjoy the fundamental rights of man based on the Confucian concept of “mutual obligation” to prevent infringement of the rights of the individual.

“Instead of claiming rights, Chinese ethical teaching emphasised the sympathetic attitude of regarding all one’s fellow men as having the same desires, and therefore the same rights, as one would like to enjoy oneself.”

Lo also referred to the Chinese classic, the Book of History, in explaining the moral code between the individual and state in traditional Chinese culture.

“Heaven sees as our people see; Heaven hears as our people hear. Heaven is compassionate towards the people. What the people desire, Heaven will be found to bring about. Heaven loves the people, and the Sovereign must obey Heaven.”

Although named the People’s Republic of China, the “people” exist to serve the state. Communist ideology denies the existence of God or supernatural beings, dictates that religions are human creations, and individual human rights are a Western construct.

Since 1949, the Chinese Communist Party (CCP) has campaigned to destroy the traditional foundation of Chinese culture and social relations to implant its communist ideology. Following the devasting impact of the Cultural Revolution from 1966 to 1976, there was a brief period in the 1980s where China appeared to be opening. Traditional aspects of Chinese culture, such as qigong (energy exercises), were accepted and promoted by the CCP.

It was in this window that Falun Gong (also called Falun Dafa) was first taught publicly in China in 1992 by Mr Li Hongzhi, and it was registered with the government’s China Qigong Research Association.

Falun Gong is a spiritual practice in the Buddhist tradition that consists of gentle, meditative exercises and moral teachings centred on the tenets of truthfulness, compassion, and forbearance. In keeping with traditional Chinese culture, it teaches personal responsibility for one’s actions and ethical choices in life.

In 1998, the CCP’s own survey found that Falun Gong was practised by over 70 million people in China, improving their health and saving the government millions of yuan each year.

However, hardliners in the CCP could not tolerate the Chinese people’s growing embrace of Falun Gong, as it taught a form of ethical thought that challenged the communist regime’s ability to maintain control over the Chinese population via communist thought. In July, 1999, the CCP began its violent campaign to eradicate Falun Gong, which continues today.

Essentially, the CCP is afraid the Chinese people would wake up and kick them out, just like the fate of past corrupt rulers in China. That process of awakening began in late 2004 with the grassroots social movement known in Chinese as “Tuidang” (Quit the CCP).

Today over 387 million Chinese people in China and around the world have renounced their ties to the CCP and its affiliated organisations, and lodged statements on the Tuidang website.

The idea of unique or “Asian” human rights is promoted by the CCP and other states that seek to prioritise state control over individual human rights.

The traditional Chinese understanding of people’s rights is linked to the relationship of Heaven overseeing human life on earth. Western concepts of human rights are also linked to Heaven under the various teachings of Judeo-Christian religions.

In essence, Western and traditional Chinese human rights have the same foundation—respect for and guidance from spiritual realms. Similarly, Falun Dafa’s principles of truthfulness, compassion, forbearance (Zhen Shan Ren in Chinese) is found at the heart of all orthodox religions.

People of all cultures, whether Western or otherwise, experience injustices that demand recognition and redress.

That is the commonality we all share. It doesn’t matter if a person is from a Western country or an Asian country; they will all experience a yearning for freedom if they are locked up, feel pain if they are tortured, and will all die if they are shot in the head.

Human Rights—Declared by Man or Imbued by God?

A human rights doctrine devoid of a divine foundation of human life is at risk of manipulation by human beings’ preoccupation with worldly self-interest.

If human rights are declared by human beings, then we enter the realm of contesting what rights are paramount and which can be negotiated away because of other interests, like development and trade. Some say this already exists as countries make economic or national interest decisions to not confront serial human rights abuses, like the Chinese regime.

As the CCP declares open hostility to the concept of God, it is not surprising that it will contest human rights that are God-given. It is imperative that all people and nations who understand the foundation of universal human rights make a stand.

Dec. 10 is a day to reflect on what the world has become and what the world can be. You don’t have to hold a particular religious or cultural belief to acknowledge that human beings have a sacred right to life.

Treating others as you would like to be treated yourself captures the universality principle of human rights—and the universal response required to uphold them.