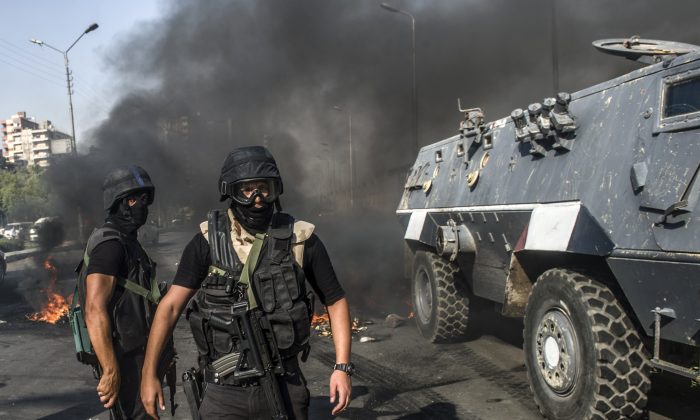 Egyptian riot policemen secure a street near an armoured vehicle during a rally of supporters of the Muslim Brotherhood movement to mark the first anniversary of the military ouster of president Mohamed Morsi on July 3, 2014 in Cairo's Ain Shams district. Egyptian police swiftly quashed Islamist protests firing tear gas and arresting dozens of demonstrators, as the protests are seen as a test of the Islamists' strength, with the Muslim Brotherhood-led Anti Coup Alliance having issued an aggressive rallying cry demanding a 'day of anger' to mark Morsi's overthrow. (Khaled Desouki/AFP/Getty Images)
Africa

The Muslim Brotherhood One Year after the Ouster

One year after the massive June 30 demonstrations against the Muslim Brotherhood (MB) and the July 3 ouster of President Mohammed Morsi by the military, the Egyptian MB is facing grave challenges that will shape the group’s future and that of political Islam. Since mid-2013, large segments of society have cheered the military’s unprecedented crackdown on the Brotherhood, which has led to more than 3,200 deaths and tens of thousands of arrests.[1] The arrests of many MB leaders has weakened the leadership’s grip on the organization and hence posed threats to its cohesion at a time when the group needs to make critical strategic choices regarding its future and its relations with the new governing order led by President Abdel-Fattah al-Sisi. The regime, cognizant of the group’s difficulties, is employing strategies that delay reconciliation. While the outcome of this conflict is not yet known, it is unlikely that the Muslim Brotherhood—and Islamism in the region and even beyond—will look the same again.

Violent crackdowns have introduced a new dynamic into the Brotherhood. The MB leadership had historically exercised full authority in running the organization and planning its future, but that control has been weakened. While the claim to victimhood has helped the MB maintain some unity, arrests of leaders and fury among the grass roots have weakened top-down controls and have encouraged individual members to take matters into their own hands, hence galvanizing organizational splits.

In this new context, the Brotherhood is torn between reconciliation and confrontation with Egypt’s new political system. Both options are associated with significant costs. Reconciliation seems more in line with the group’s history of pragmatism and is the only path for the reintegration of the politically conservative group into formal politics. However, increasingly radicalized members are balking at moving the organization in this direction; they view it as surrender in light of the high price they paid over the past year. The weakened leadership will not be able to push the MB down that reconciliatory path, and attempting to do so is likely to lead to major splits. The organization’s splinters were recently on display when the traditional leadership put forth a press release in early May noting that it had not “yet” decided whether it will file candidates in the upcoming parliamentary elections. This more compromising stance is directly at odds with the rising wave of more militant Brothers, and the release was removed from the MB’s website only two days later.2

But the MB cannot stand still, either. It has not adopted a reconciliatory path (perhaps it cannot), and it may very well move toward confrontation. A significant number of MB activists are influenced by the discourses of their Jihadi allies, which do not preclude violence. This influence challenges the organization’s long-standing tradition of nonviolent engagement—a principle that shaped and differentiated it from other Islamist groups over the decades. Attempting to counter this tendency, the National Alliance to Support Legitimacy, an Islamist coalition opposing Morsi’s ouster that is dominated Brotherhood leaders, defined “peaceful dissent” as that which forbids protestors the use of bullets3 but permits reactive micro-violence, such as throwing Molotov cocktails. While such a strategy might help the Brotherhood hold on to some radicalized members who would otherwise join more militant organizations, it can hardly be sustained with the acceleration of the state crackdown, which increases the likelihood that MB members will resort to violence.

In fact, the MB must refrain from violence to ensure its survival. The endorsement of violence automatically undermines the group’s social investments, including hospitals, schools, and NGOs, as well as the economic interests of its businessmen. Further, the leadership realizes the need to distance the group from aggression so as not to lose international (that is, Western) support that can (partially) act as a counterweight to the Saudi-led Gulf pressure to thwart the organization. It is likely that continued conflict and internal organizational tensions will further divide the Brotherhood, especially with the leadership’s loss of control.

The Brotherhood is also facing the challenge of a decrease in Islamists’ relative power and an increase in competition between Islamist actors.

During the 2011-2012 parliamentary elections, Islamists ran on two different lists: a Brotherhood-led list that won 216 seats and a Salafi Nour Party-led list that won 112 seats. Collectively, Islamists controlled over two thirds of the parliament; the Brotherhood could comfortably tolerate other Islamists because of the power the groups held when allied. It focused on maintaining its leadership of the Islamist bloc, which could dominate parliament and decision-making.

In 2014, however, the group is fighting for space amidst fierce competition. The Nour Party, which sided with the military against the Brotherhood, hopes to capitalize on the latter’s exclusion and inherit any Islamist influence by being the closest Islamist power to the regime, even though its members are also being killed and arrested by the Sisi government.4 Nour campaigned for the less Islamist post-Morsi constitution in January and openly backed Field Marshal Abdel-Fattah al-Sisi during the presidential race. The Brotherhood has fiercely discredited Nour’s positions and labeled its leaders as sellouts who have compromised their legitimacy.5 While this strategy might be successful in discrediting the Nour Party, it could backfire if the Brotherhood opts for reconciliation.

Growing numbers of jihadi movements and ideologues (e.g., Yahia Refaay Sorour, Eman Badawy, Abdulrahman Ezz, Ahmed Elmogheir, Wagdy Ghoneim) are also competing with the Brotherhood (and Nour) over Egypt’s Islamist constituency. These movements blame the Islamists’ failures on the Muslim Brotherhood’s “mild” position and willingness to compromise on its Islamist identity. This argument resonates with Islamist-leaning citizens, particularly when the Brotherhood demonstrates a willingness to work with the regime, as illustrated by the recent press release regarding parliamentary elections, which was eventually removed. The jihadis’ dogmatic position is a threat to the already weakened Brotherhood’s organizational cohesion.

The Sisi regime enjoys widespread popularity and the backing of various societal groups in large measure because of its crackdown on Islamists. In fact, while competing economic interests divide the ruling elite, enmity toward Islamists appears to unite them. The regime has also been dependent on the petrodollars of countries eager to crack down on the Islamists; it therefore has monetary reasons to capitalize on the Brotherhood’s moment of weakness and prevent its revitalization.

This strategy has become more extreme of late. The regime sees the group’s internal challenges and divisions, making it less inclined to pursue reconciliation as it might have done in the immediate aftermath of Morsi’s ouster. Instead, it chooses to keep only a small window of negotiation open with the Brotherhood’s political arm, the Freedom and Justice Party (which remains legal), to encourage Brotherhood divisions.

While the door for the inclusion of Islamists in the Egyptian government will remain semi-closed in the months to come, in the medium to long term the regime will have to negotiate a formula for their inclusion to ensure the political system’s sustainability. It probably intends to make the most of its momentary hold on power to force surrender from the Brotherhood to the ‘rules of the game’ as defined by the Egyptian state. This involves forcing the group to distance the Freedom and Justice Party from its proselytizing activities and philanthropic work, as well as detaching these activities from the Muslim Brotherhood’s international branches.

The regime hopes that the prolonged crackdown will alienate the more dogmatic leadership of the group and allow for the emergence of more compromising leaders. These leaders would ideally accept their loss of hegemony over the Islamist sphere and the new balance of power, and would be willing to work politically through the Freedom and Justice Party. This more “tamed” Brotherhood leadership already exists, but the radicalized constituency makes it less relevant at the present time. The regime seems ready to prolong the conflict until a majority of the group’s members are exhausted and as a result are more willing to compromise. However, this is a risky strategy, for while exhaustion might lead a majority of Brotherhood members to compromise, it will inevitably lead others to more violent alternatives.

[1] According to WikiThawra, a web site run by the Egyptian Center for Economic and Social Rights, over 3,200 demonstrators were killed during the period between July 3, 2013, and January 31, 2014. As for the number of detainees over the past year, a Human Rights Watch report cites “unnamed government officials” as the source for an estimated 16,000 detainees and notes the wikithawra estimate of 41,000. See “Egypt: New Leader Faces Rights Crisis,” Human Rights Watch, June 10, 2014.

[2] Interview with an MB leader, who reported that the release triggered a barrage of attacks by MB members who called him a sellout, a traitor, and an opportunist.

[3] The MB’s position on violence is explored in Hadeer al-Hadary, “The ‘Natural Develoment’ of the Muslim Brotherhood Slogans: ‘Anything Short of Bullets is Peaceful,'” al-Shurooq, 6 January 2014.

[4] Several Nour Party members were killed during the storming of Rabaa and Nahda sit-ins last summer, and tens of others have been arrested in demonstrations and other activities opposing the military intervention. The party’s leadership is trying to capitalize on its close ties with the regime to release its prisoners, arguing that their continued detention only radicalizes its grassroots and brings them closer to the MB. See, for example, Mohammed Fattouh, “Makhyoun to Hand-in a List of Nour Party Detainees to the General Prosecutor within days” Masr Al-Arabia, 24 May 2014.

Ibrahim el-Houdaiby is a senior researcher at House of Wisdom Foundation for Strategic Studies and a lecturer at AMIDEAST. He holds a B.A. in political science  (2005) and an M.A. in political science and development studies (2012) from the American University in Cairo. He also earned a diploma in Islamic studies from the High Institute of Islamic Studies in 2010, where he is currently pursuing an M.A. in Islamic Shariah. He writes a weekly column for the Arabic daily Shorouk and is a freelance columnist for the English language Ahram Online. His research focuses on Islamic movements, democratization, and the political economy of the Middle East. This article was originally published in the Middle East Institute.