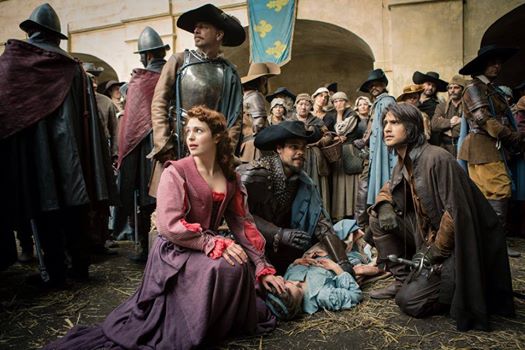 The Musketeers season 1 is set to wrap up on Sunday, August 24 and fans are wondering about season 2.

BBC America renewed the show prior the first season even starting, confident that it would be successful.

A premiere date hasn’t been announced but it should start around the same time as the first series, but in 2015.

Series creator Adrian Hodges says that season 2 will have more gruesome fight scenes as well as more sexual content, as he toned down the first season because he was told it would air at 8 p.m. and had to be family-friendly.

“We wouldn’t have done the first series in that way, had we been doing the whole thing as a 9pm show,” he told the Mirror.

“We would have pushed the tone much further in terms of sexuality and violence. So for this second series, I knew we were going out at 9pm and so we have pushed it harder for this audience.”

Another shift to the series was sparked by Peter Capaldi (Cardinal Richelieu) leaving to become the new Doctor Who. Hustle’s Marc Warren was brought in to play the Comte De Rochefort to take Richelieu’s place as the main villain.

“Marc will be the villain and he will run through the whole series, coming in and out of the boys’ stories like The Cardinal did,” Hodges said.

Also coming on board is Colin Salmon (Charles Robinson from 007 films), playing Tariq “a mysterious interloper on the run from Spain” while Misfits actress Antonia Thomas will play Tariq’s daughter Samara.

Other new cast members include Marianna Oldham, who said via Twitter she would be equipped with a bow and arrows.

SpoilerTV reported that filming started back on August 3.

Check out some behind-the-scenes photos via the official Facebook page below.