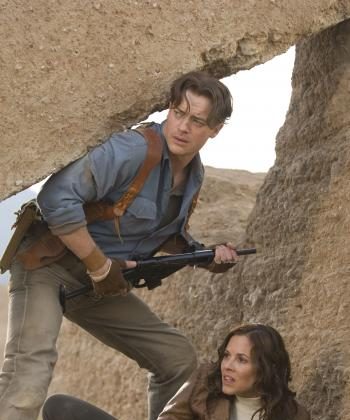 Brendran Fraser returns to take on an army of mummies, in, err, ‘The Mummy 3’, this time with Maria Bello. (Universal)
Entertainment

Movie Review: ‘The Mummy: Tomb of the Dragon Emperor’

The only redeeming feature of The Mummy: Tomb of the Dragon Emperor is that after having to sit through its butt-numbingly brash 110 minutes, suddenly Indy’s disappointingly average fourth adventure looks positively Raiders by comparison.

One of the worst scripts in recent movie history, The Mummy 3 is the epitome of huh? Hollywood. As in how the hell did this get greenlit? A bare bones plot was expected (have you seen The Mummy and its Return?), but never anything this monumentally bad. Especially from the showrunners of TV’s Smallville, a show that successfully marries action, comedy and drama on a (mostly) weekly basis.

Beginning bad and getting worse from there, the film unearths Rick (the returning and freakily-ageless Brendan Fraser) and Evie (a horribly miscast Maria Bello, replacing Rachel Weisz who wisely turned down the opportunity to resurrect her role, probably after reading the dog of a script) in the midst of retirement in England and devoid of any semblance of personality or sense of comic timing.

Meanwhile, their suddenly shot-up, brat of a son Alex (an unlikeable Luke Ford) is on a tomb raiding expedition in China. One plot contrivance later, they are united in Shanghai with the unnecessarily-returning “comedy” (and that term is used very loosely) sidekick Jonathan (John Hannah) and on the humdrum hunt for Shangri-La and the means to defeat the latest mummy.

From here the film then freewheels (or is that careens?) from one badly directed set-piece to the next – horse-drawn cart vs car chase through the streets of Shanghai, Himalayas-set abominable snowmen (more on them later) smackdown, LOTR-lite royal rumble between two armies of the undead – without once managing to raise the pulse. Breaking these laborious action scenes up are some of the most laughably bad, cornily-scripted, stiltedly-delivered, chemistry-free scenes of dire-logue imaginable. Not to mention some truly terrible and tumbleweeding “gags” that will fail to raise even a titter from even the most lowbrow, humour-free individual.

Then there’s the CG effects. To describe them as cheap doesn’t even come close. How this carries a budget of $145,000,000 is a mystery, because none of it is up there on the big, unforgiving, screen. The Harryhausen-inspired skeletons juuuust about cut it without looking like they’ve advanced Harryhausen’s original technique, but the abominably-rendered, anthropomorphic ninja yeti and the transmorphing, three-headed Jet Li dragon are sooooo bad they even rival the Blue Peter cut-and-paste efforts of The Mummy Returns.