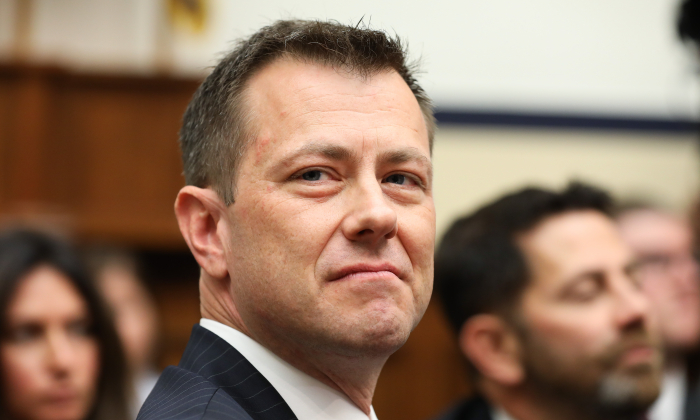 FBI Deputy Assistant Director Peter Strzok testifies at the Committee on the Judiciary and Committee on Oversight and Government Reform Joint Hearing on, “Oversight of FBI and DOJ Actions Surrounding the 2016 Election" in Washington on July 12, 2018. (Samira Bouaou/The Epoch Times)

A long-awaited milestone in the special counsel investigation into issues surrounding the 2016 election was reached on Dec. 4.

Special counsel Robert Mueller’s team made a court filing in which it gave recommendations to U.S. District Judge Emmet Sullivan about his forthcoming sentencing of former Trump national security adviser Lt. Gen. Michael Flynn, which is currently scheduled for Dec. 18.

I say currently scheduled because, thus far, Flynn’s sentencing date has been delayed three times since he pleaded guilty to one count of perjury on Dec. 1, 2017. If you’re keeping track, that’s more than a year ago. So there’s a chance it may be delayed yet again.

The chief revelation of this new filing that has grabbed the most media attention is that Mueller is recommending no jail time for Flynn, due to Flynn’s extensive cooperation with the special counsel.

What’s getting less coverage is that the filing reveals Flynn gave 19 interviews, not just to the special counsel team over the past year as he cooperated, but also to “other offices” within the Department of Justice (DOJ). That very likely means Flynn gave testimony to both DOJ Inspector General Michael Horowitz and U.S. Attorney John Huber.

Flynn pleaded guilty to giving a false answer during an FBI interview about some phone calls with then-Russian Ambassador Sergey Kislyak in December 2016.

The FBI agent who conducted the interview that led to the Flynn perjury charge from Mueller’s team was none other than Peter Strzok, a name that is well-known to those who have followed the Spygate twists and turns over the past year.

In the middle of both the Crossfire Hurricane counterintelligence sting and the investigation of Flynn sits Strzok. And even though the mainstream media has done its best to downplay it, this is a massive problem for the Mueller team.

Strzok first gained national attention last December when Horowitz suddenly handed off the first release of Spygate documents to Congress. Those documents included the first batch of the now infamous Strzok–Lisa Page text messages. Those initial texts—and the ones that followed—made for some very eye-opening reading.

Strzok appeared to have been a jack-of-all-trades within the FBI, with his involvement in almost every politically sensitive investigation from 2016 to 2017: the Hillary Clinton email investigation, the aforementioned Crossfire Hurricane probe, and the pursuit of Flynn. And then—despite Strzok’s and Page’s protestations and misgivings—they were both assigned to Mueller’s special counsel team.

When Horowitz went digging into Spygate, one of the first things that happened was that Strzok ended up being stripped from Mueller’s team and stuck out of the way in the FBI’s human resources department, which is supposedly where problem agents are parked until they can be dealt with.

After a nationally televised hearing in front of a congressional committee, a combative Strzok was fired on the recommendation of Horowitz, following the release of a report on bias in the FBI’s handling of the Clinton email investigation.

What that means is this: The agent whose testimony is central to the perjury case against Flynn got himself fired from the FBI for showing blatant political bias in the performance of his duties.

When the agent sitting at the center of the beating heart of both the Crossfire Hurricane scandal and your own highly problematic perjury prosecution of Flynn manages to get himself fired for blatant bias and violating FBI protocol, you’re going to be forced to tread carefully.

And so, by all appearances for the past year, when it comes to Flynn, the Mueller team has been forced to tread very, very carefully.

Another issue regarding the problematic interview of Flynn by Strzok and fellow FBI agent Joseph Pientka is that the interview was supposedly necessary for the FBI to determine exactly what Flynn said to Kislyak in those phone calls, so it could be ascertained whether Trump’s incoming NSA adviser had violated the Logan Act.

This stated reason for the interview is sheer nonsense, as a moment’s clear thought will demonstrate.

Flynn is a veteran spymaster and a former director of the Defense Intelligence Agency, with a career in international intelligence work that spans more than 30 years. The chance he simply forgot that all his phone calls with Kislyak were being monitored by multiple intelligence agencies is zero percent. Nobody would be more aware that these types of phone calls are carefully monitored—with intercepts made, and transcripts created—than Flynn.

That means the mainstream media’s narrative about Flynn trying to do some secret colluding deal with Kislyak, on behalf of the Trump campaign, is blatantly false.

Prepare yourself for a shock, if you bought into the mainstream media’s take that Flynn was guilty of any kind of Logan Act shenanigans. The FBI itself cleared him of any wrongdoing after reviewing the intercepts of the phone calls. That story appeared in The Washington Post the same day that Strzok and Pientka suddenly showed up at the White House to grill him about it.

So ponder this: The FBI already had the transcripts of the phone calls between Flynn and Kislyak, reviewed them, and determined that Flynn hadn’t violated the Logan Act or broken any other law. This was done before Strzok suddenly showed up unannounced to grill Flynn on what he and Kislyak had discussed.

So if you smell a rat in all of this, trust me, you’re not the only one.