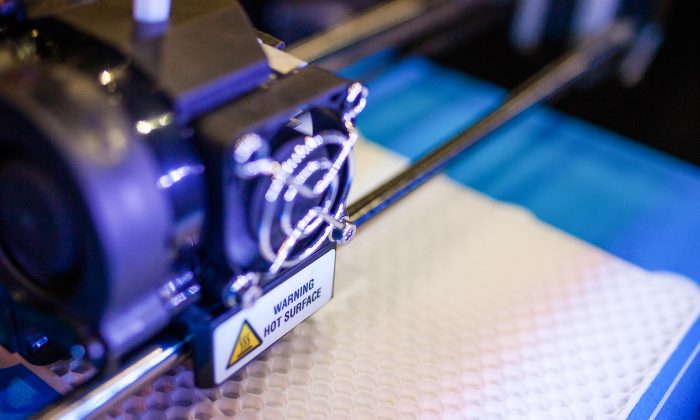 A 3D printer in action at the Inside 3D Printing Conference and Expo 2015 in the Javits Convention Center, Manhattan, New York, on April 16, 2015. (Petr Svab/Epoch Times)
Business

The Most Useful 3-D-Printed Item Out There Yet

NEW YORK—Life-sized weapons, cars, and weird art were on full display at the world’s largest 3-D printing expo at Jacob K. Javits Center last week. But for those looking for life-saving science and ready-to-print cars they can drive off into the sunset, the technology is still decades away.

Using 3-D printing could save lives. And it could speed up and advance the building of planes and rockets. Yet for those lofty goals to come to fruition, it will take decades of funding and development, according to Peter Leys, executive chairman of the board at 3-D printing software provider Materialise, who rounded off the three-day conference with a looking-ahead speech.

Still, the benefits would be amazing. Leys pointed to the models of human organs that 3-D printing could produce, which would help make advancements in surgery. In particular, 3-D printing could make models of newborn babies’ hearts for cardiac surgeons to practice operating on. Surgeons find newborn babies’ hearts most challenging because they are still underdeveloped.

“Better surgeries would mean less surgeries,” said Leys, adding that it might take a generation before that happened. He noted that it would take time to convince the government to fund R&D for 3-D printing.

Leys recommends that 3-D printing companies approach the aerodynamics and medical industries first, what he called the “higher end.” If 3-D printing could begin to be incorporated in the production cycles of such heavily regulated industries, it would thrive elsewhere since the investment these industries put into 3-D printing would reap more technological advancements.

Currently, many items cost more time and money to 3-D print than to make using traditional means. For instance, a 3-D-printed water sprinkler could cost anywhere from $32 made in a polymer to $5,134 made in wax, assuming you don’t own your own 3-D printer and have to send in an order instead. The company does promise to be energy efficient, however.

One Useful Item You Can Buy Now

On the rare occasion, some products do offer more competitive pricing and functionality. Manhattan-based company Normal, founded last July, sells custom-tailored earphones for a fraction of the price people normally pay. Custom-made earphones, with parts that fit into the ear canals, provide a better range of sound than other earphones.

The earphones are made from a scan of your ears and can be ordered for $199 online or in the Chelsea factory. The company offers a lifetime warranty and promises the product will be ready within 48 hours, a shorter wait than its competitors.

These are the types of applications that I think really brings out the advantages of 3-D printing.
— Behzad Soltani, e-commerce and business development vice president, Staples

The idea for the earphones came from founder Nikki Kaufman, who was looking for custom-made earphones to use while exercising during her days swimming for Princeton University, said Rameses Wilson, who works retail for Normal.

Kaufman visited an audiologist and got a silicon mold, but found the experience uncomfortable. Later, after co-founding Quirky, a company that helps fund inventions, she got the idea to 3-D print the earphones instead.

Through a quick scan of the ears, Normal avoids the conventional method of placing a silicon mold into the ears.

“That’s very abrasive, getting something shot into your ears,” said Wilson. “Now we can do it with just a simple photograph.”

The company’s engineer makes a 3-D contour based on the photos and programs it into the printer.

The exhibit of earphones caught the interest of Behzad Soltani, vice president of e-commerce and business development for Staples.

Soltani told the Epoch Times that the earphones exhibit was his favorite part of the conference and what he believed to be the most innovative technology.

“It’s very reasonably priced when you compare it to what’s out there,” said Soltani, hinting that he might buy a pair himself. “These are the types of applications that I think really brings out the advantages of 3-D printing.”