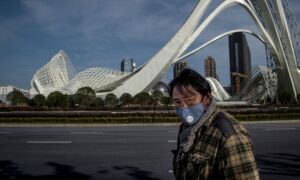 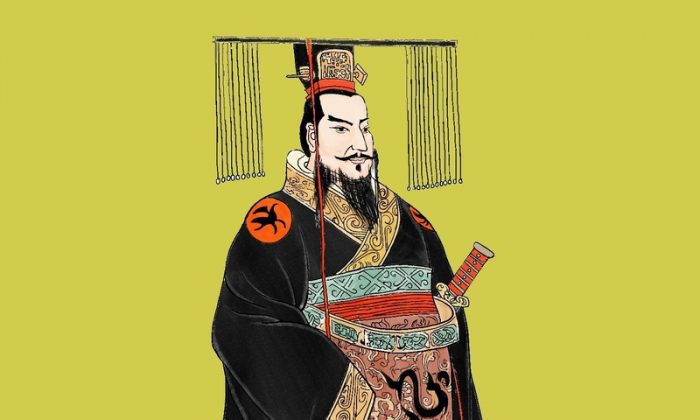 The Most Important Figures of Chinese History: The First Emperor’s Unification of China

This is the ninth in a series of articles by Epoch Times staff describing the foundations of Chinese civilization, and setting forth the traditional Chinese worldview. The series surveys the course of Chinese history, showing how key figures aided in the creation of China’s divinely inspired culture. This installment introduces Qin Shi Huang, the first historical emperor.

Ending the tradition of abdication to a chosen successor, as had been the case with the rulers Yao and Shun, Yu the Great founded the hereditary Xia Dynasty. A thousand years passed before King Wu defeated the Yin Shang kingdom, which had subdued the Xia, and founded the 800-year-long Zhou Dynasty.

During the Zhou kingdom’s gradual decline from the Spring and Autumn Period beginning in the eighth century B.C., the fractured Chinese civilization entered a centuries-long saga of political intrigue, military exploits, and cultural maturation.

The Warring States and the Rise of Qin

The final victory of Qin State and its king Ying Zheng, who went on to rule China’s first imperial dynasty, was the conclusion of a historical saga that played out over centuries in what the Chinese referred to as “tianxia,” the known world under heaven.

The rise and fall of Chinese dynasties can be characterized by its cyclical pattern: As society sinks into moral degeneracy, social disorder, and natural disaster, rebellious forces emerge to purge the corrupt or ossified regime and establish a new dynasty.

According to ancient records, China was once home to thousands of states. By the time of the late Zhou Dynasty, there were hundreds, and this figure declined yet further to about 140 in the Spring and Autumn Period. Come the era of the Warring States in the final years of the Zhou, only seven remained standing. Their rulers now fancied themselves kings in their own right, ignoring the feeble decrees of the powerless Zhou monarch.

Ying Zheng was the latest of six ambitious kings governing the western Chinese state of Qin, who spent over a century turning this backwater region into a regional power by inviting and employing talented administrators and advisers from all around China. Many of these men had been overlooked in their homelands, but Qin’s rulers readily accepted them into the highest government offices, greatly strengthening the state.

The Warring States Period began roughly in 500 B.C. and lasted for about 300 years. As Qin grew, its primary rival was the wealthy Qi State, a coastal power in eastern China.

To negate Qi’s initial edge, Qin State embarked on a patient and intricate game of diplomacy whereby it encouraged contradictory schools of inter-regional relations. As a result, a Qi-led coalition, created by the “vertical school” of the scholar Su Qin, rose along a north-south axis to defend against Qin’s frightening rate of expansion, but it was undermined by Qin’s subversion of individual states that held up the alliance, represented by the efforts of Zhang Yi’s “horizontal school.”

By the time of Ying Zheng, the anti-Qin alliance was all but powerless, whereas Qin had fought multiple successful wars on all its eastern borders while assimilating non-Chinese peoples from the frontiers. The empire was ripe for the taking.

From Hostage to King

There was a host of omens foretelling the unification of China by the Qin Dynasty and a powerful ruler. The historical work “Records of the Grand Historian” states that in 762 B.C., Duke Wen of Qin received a mystical stone from a god, to which he offered sacrifices. The deity often came at night and arrived from the southeast. He clucked like a cock, causing the local pheasants to crow in the darkness.

Duke Wen constructed a temple for the stone, called the Ancestral Hall of the Magical Cock. This is the origin of the modern name for the city of Baoji, in Shaanxi Province, which is built around the temple. The “Book of Feng Chan” in the “Records” says that the one in possession of the stone would become a “powerful chieftain of feudal lords.”

It was also recorded that during a hunt, Duke Wen had caught a black dragon—a sign of the water element. This was an auspicious sign, as the ailing Zhou Dynasty had been divined to be of the weaker fire element.

In 374 B.C., the official responsible for historical records in the Zhou court met Duke Xian of Qin and informed him that an overlord would be born in his state and unify China.

The man we know as the First Emperor was in fact born in the year 259 B.C. on enemy soil. His father was a Qin prince who had been sent as a diplomatic hostage in the state of Zhao. Ying Zheng was eventually able to make it to Qin State, and he became king at the age of 13.

Ying Zheng’s skilled prime minister, Lu Buwei, was able to recruit many talented officials and was an effective administrator when he acted as regent during the first nine years of Ying Zheng’s reign.

Eventually, Ying Zheng gained real power when he thwarted a plot by his mother and her lover, the fake eunuch Lao Ai, to seize control. Because of his involvement in this conspiracy, Lu Buwei committed suicide.

In 238 B.C., Ying Zheng was crowned in the capital of Qin State.

The new king maintained close relations with his ministers and generals throughout the entirety of his rule. The famous administrator Li Si served him for 30 years.

After generations of mobilization and regional wars, Ying Zheng decided it was time to roll over the enemy states standing in the way of unification. His path of conquest started with Zhao in the north, and then Wei in central China. The minuscule Han south of Wei was next to go, and the massive state of Chu capitulated after a lightning campaign. To the northeast and east, the defeat of Yan and Qi states meant the end of all organized resistance.

Qin State’s first enemy, Zhao State, had already been weakened significantly in its many border wars, but it still possessed a powerful army commanded by the skilled generals Li Mu and Pang Nuan. Ying Zheng threw his main force at Zhao while making diplomatic overtures to Han State. In 231 B.C., Qin successfully arranged the defection and rebellion of a Han governor. Ying Zheng sent troops to assist his ally and arrested the king of Han in 230 B.C. The state was annexed.

The next year, Qin dispatched the general Wang Jian to oversee the campaign against Zhao and its general Li Mu. After a year of stalemate, Qin agents led the king of Zhao to distrust and execute General Li. The Zhao forces, bereft of their commander, crumpled in 228 B.C., and Qin armies marched into the state’s capital. Some Zhao leaders escaped to lead a futile resistance, but they were destroyed six years later.

In the meantime, the king of central China’s Wei State did not support its neighbor Zhao but instead tried to appease the Qin king by ceding land. This self-inflicted loss crippled Wei, and in 225 B.C. Ying Zheng sent the general Wang Ben to besiege its capital. General Wang flooded the city, and the Wei king surrendered.

Fall of the South

To the south and east of Qin lay the vast and populous kingdom of Chu. Despite its size and resources, constant internal struggles between nobles and ministers rendered it a second-rate power. By the time Qin raised armies to attack it, it had experienced a fresh regicide and was in disarray. Ying Zheng formed an army of 200,000 men and entrusted its command to the young and proud general Li Xin.

This proved a miscalculation, and in 226 B.C. Li Xin came back in defeat.

Qin State had more men and other generals. Ying Zheng paid a personal visit to Wang Jian, the elderly commander who had defeated Zhao State, and persuaded him to lead 600,000 men in the Chu campaign.

Morale in Chu State was high after their general Xiang Yan successfully repulsed Li Xin. Wang Jian sensed this and stopped his army a short distance into the country, feigning reluctance to fight.

A year into this ruse, the Chu troops concluded that Wang Jian was too old to lead an army at war, and they let down their guard. It was the moment Wang had been waiting for. He ordered the entire Qin army into an offensive that killed General Xiang in the first attack and cascaded deep into Chu State.

In 223 B.C., the king of Chu surrendered and his state was dissolved.

When Wang’s troops came to Mount Xi in today’s city of Wuxi, in Jiangsu Province, they discovered a mysterious stele while digging pits for cooking.

The words inscribed on the stone read: “War will persist so long as Mount Xi produces tin. Peace will come when the tin is naught.”

Wang and his subordinates learned from the locals that the area had been rich in tin since the days of King Ping of the Zhou Dynasty. But as of late, production had dipped. The stele’s origin was unknown.

Pleased at the revelation, Wang Jian had the area named Wuxi, which means “where there is no tin.”

With Zhao State extinguished, Qin’s armies now bordered the land of Yan to the northeast. Fearful for the future of his reign, the Yan king allowed Prince Dan to take emergency measures. Dan recruited the assassin Jing Ke, who in 226 B.C. famously volunteered to go on a one-way mission to murder Ying Zheng.

Jing Ke nearly succeeded in killing the Qin king, but Ying Zheng narrowly avoided his poisoned dagger and slew him in the throne room.

Qin deployed a punitive force against Yan’s capital of Ji (modern Beijing), but put that war on hold after driving the king into Manchuria. In 222 B.C., after concluding the Chu campaign, Qin forces under Wang Ben finished the job and destroyed Yan State.

The lone state remaining was Qin’s archrival Qi. This state occupied what is now Shandong Province and had a glorious history throughout the Zhou Dynasty. But it had recently suffered defeats in wars with five other states, and was now led by the incompetent King Jian.

While previous legendary rulers had been called “di” or “huang,” which can be rendered “emperor,” Qin Shi Huang was the first to call himself “huangdi,” a title using both terms. It is the word for all emperors following Qin, and it is still in used in modern language to refer specifically to Chinese sovereigns.