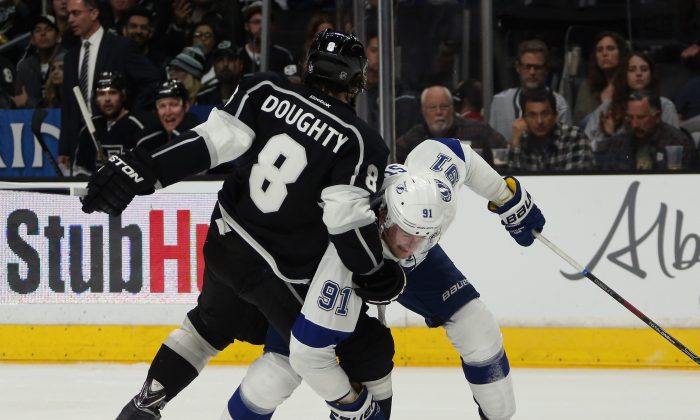 Drew Doughty holds up Steven Stamkos at the Staples Center on Feb. 16, 2015 in Los Angeles. The Kings defensemen shines in enhanced stats, but is less convinced of their usefulness. (Bruce Bennett/Getty Images)
Canadian Content

The More We Know About the NHL, the More It Changes

The “observer effect” refers to the influence that the act of observation has on the object of study, namely, that the closer one studies the behavior of something, the more it changes.

With the introduction of “enhanced stats,” co-opted by NHL.com last week, the world of hockey should expect some radical transformations.

New analytics that have come to pervade popular hockey conversation are now on a larger stage than ever. Initially, bloggers and fans alike provided a new way of quantifying the sport with advanced metrics like “Corsi” and “Fenwick.” Over the past couple of years, some of the purveyors and innovators of these metrics began to get hired by NHL clubs: Kyle Dubas in Torontos, Sunny Mehta with the New Jersey Devils, and Eric Tulsky with an unnamed team to name a few.

While the NHL is following and not leading a sports trend in this case, there will be important revelations arising because of their commitment to number crunching.

As of Feb. 20, the NHL and SAP—a German software engineering corporation that also sponsors the San Jose Sharks home arena—combined to revamp NHL.com’s stats page with not only enhanced stats, but also in-depth historical records reaching back to the NHL’s inaugural season in 1917, better visualization of numbers to attract readers, and predictive algorithms.

Now fans will be able to track primary and secondary assists, easily compare legends with current stars and, in phases to be rolled out in the near future, the speed of both the players and the shots they take with player tracking. Corsi and Fenwick, two metrics created and popularized through bloggers, have been renamed as SAT (shot attempts) and USAT (unblocked shot attempts) in an effort to make the terms less exclusive with less coded names.

What Corsi and Fenwick, among other stats like “zone starts” or SPSV% (shooting percentage plus save percentage, formerly “PDO”) provides NHL executives with is a better understanding of a player’s individual performance relative to his teammates and to different situations on the ice.

But these new ways of thinking about hockey may also change how agents negotiate contracts for their clients. It may affect how players behave on the ice. It might change the very fans who follow the game.

Jake Muzzin, a defenceman for the Los Angeles Kings, became somewhat of a poster-boy for advanced stats when his possession numbers suggested he wasn’t simply a product of being Drew Doughty’s defence partner on a Stanley Cup-winning team. Doughty and Muzzin continue this season to dominate in SAT% in five-on-five situations, yet the Kings had already decided this past October to extend Muzzin for five years at $4 million per year.

Undoubtedly, players and agents will take notice of how more information can affect subsequent contract negotiations. Will players start keeping track of their SAT percentages? Will zone starts (a calculation of where a player starts his shift on the ice) rival ice time as a measure of a player’s supposed value?

Players have largely scoffed at new analytics, apparently not seeing the use for them on the ice. Doughty said back in September, “I think that Corsi is a bunch of [omitted], personally. That’s not to take anything away from [Muzzin] being the top guy in the league, because you know [he’s] a really good player.”

The more these metrics are accepted by fans and executives, the more you may see players using it to their advantage.

The debate as to the usefulness of these metrics is largely over, yet questions remain. What types of fans are these numbers for and will NHL.com enhance the experience for the ones long devoted to the sport?

Certainly NHL executives have use for them. Writers and broadcasters have more tools and areas of research at their disposal. Fantasy hockey managers and gambling enthusiasts can better predict outcomes.

But for the casual fan looking to be entertained, thrilled, or distracted from their daily lives, what benefits can they glean from NHL.com’s venture into enhanced stats? Whether or not they engage with the site, the conversation is being had more widely and frequently.

Will more knowledge at the fingertips of fans—who remain left out of team decisions, despite their best efforts—enhance their enjoyment of hockey? The advent of “CapGeek,” now dissolved, allowed fans to keep up with their team’s salary cap spending and gave them tools like “Armchair General Manager” where they could devise realistic trades that were cap-compliant. Still, it seemed like an idle fancy, devoid of anything that might educate or enliven.

There will continue to be doubters just as the NHL will continue to have Doughty’s, watching and playing the game the way it always was—on the ice. Things change, as they have today and as they will tomorrow. Perhaps the players understand the fluid nature of the game better than most. The more you know about hockey, the more you realize how much more there is to learn.

For now, the hockey world has a set of new toys to play with on a stage larger than before. What might be most exciting is following how this may change the sport forever, for fans and players alike.

Joe Pack is a freelance writer based in Toronto covering sports and culture. Find him on Twitter @JoePack