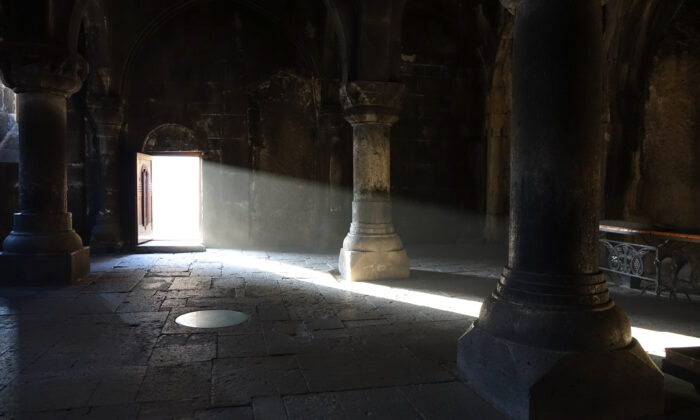 The Moral Imperative of Sanctuary

The headlines of two years, and intensifying by the day, have followed a trajectory from the history books: disease, quarantine, early death, inflation, food shortages, war, and now even the prospect of famine.

My mind forever races back to Feb. 28, 2020—two weeks before our lives went into upheaval—and the horrifying suggestion of The New York Times:

That’s precisely what happened. It was catastrophic, and the damage is all around us. And it is getting worse. All this drives us to consider a way to stay safe in the midst of chaos that hardly anyone expected.

If we really are going back from modernity, away from prosperity and peace, toward a world in which life is “solitary, poor, nasty, brutish, and short,” we must think of another way to go medieval.

We need to cultivate sanctuary. It is not only needed. It is morally urgent.

The medieval monastery was not merely a hideaway for prayer for those with the calling. It was a center for learning, innovation, and safety during centuries of grave danger, disease, and political upheaval. Its focus was both internal (cultivation of minds and hearts within a framework of safety) but also external (inspiring the world to improve).

An institution founded for the purposes of eternal salvation ended up making enormous contributions to the birth of modernity through its mission to preserve, protect, and build. Indeed, the first really elaborate structures of the post-feudal business enterprise began within the monastic framework.

Later the modern university came to absorb those functions. The idea, writes John Henry Cardinal Newman, was to foster universal knowledge without restrictions, without invasion of politics, without impositions or limits on discovery, all in the effort of serving society by fostering good thinkers. It also served as the basis of research. It was to be a sanctuary, a protected place.

There’s no need to belabor what’s become of that vision. Ask any college professor.

A more modern example of the need for sanctuary comes from interwar Europe. Switzerland was neutral in the great conflict and also host to great institutions of learning, protected from the wiles of political upheaval.

From Vienna, vexed from the mid-1930s with the rise of anti-Semitism and the Nazi political movement, came hundreds of intellectuals, people who despised leaving their home but knew full well that it was best. For what? Not just for their lives but for something they valued even more: their vocations. Their ideals. Their love of ideas. Their aspirations for the future of humanity.

Just as a thousand years previous, the books and knowledge that came from the 20th-century sanctuary in Geneva ended up giving rise to some of the most important works for the preservation of knowledge and the discovery of new ideas. As European civilization descended into barbarism, this beautiful spot provided respite, saving ideas and lives too.

Ideally, we would live in a world in which such safe havens were not necessary. Sadly, that will not likely ever be true. Too often, however, we do not prepare. Resources for the building of such places are scarce, and the courage to protect them in a crisis is even scarcer.

And so, when the winds of chaos and confusion swept through our lives in the Spring of 2020, kicking off two years of disaster for which there is no end in sight, there were few safe spaces. The internet has been heavily censored, voices of dissent have been silenced, and institutions that we once believed would provide opposition and resistance feel silent.

We needed sanctuary. If someone had predicted the events of 2020 to you in 2019, you likely would not have believed it. In January 2020, a few people warned that lockdowns were possible but faced ridicule for imagining such a thing. Conspiracy theorists! In fact, the prospect of such a thing was a long time coming.

In 2005, George W. Bush gave a press conference on the need to mobilize all national resources for a war on the Avian bird flu, which many people including Anthony Fauci predicted would carry a 50 percent mortality rate. Not just among the infected: “50 percent of the population could die,” the world’s leading authority on the pathogen told a gullible media always hungry for headlines and clicks.

The moment came and went, mainly because, contrary to all elite predictions, the flu didn’t cross over from birds to humans. Bush’s wild press conference faded in memory, if anyone paid attention in the first place. There would be no lockdown. No destruction. No abolition of social and market functioning. For now.

That would wait 15 years.

We should have paid attention. These early statements foreshadowed the government’s response in the event of a real pandemic. They would use all the force of wartime to stamp out the pathogen. It would be an experiment, somewhat like the Iraq War was an experiment in remaking a whole region. What was left in its wake was a disaster, but somehow it did not become a deterrent to another millenarian crusade.

SARS-CoV-1 of 2003 threatened to become a global pandemic but somehow did not. Many people credited interventions by WHO, rightly or wrongly. But that latter experience encouraged the disease mitigators: maybe planning, compulsion, track-and-trace, and quarantine really can work to suppress a virus. The flu pandemic of 2009 (H1N1) came with too many distractions: there was a financial crisis to deal with, and Obama couldn’t get interested.

History was waiting for the perfect storm. The right virus. The right political moment. The right consensus at the top for extreme measures. The discovery of the Wuhan virus in January 2020, though it had already been in the United States for some six months earlier, offered an opportunity to try something completely new. Two years after the “before times,” we know what that achieved.

The lockdowns blindsided nearly everyone but a handful of people at the top. Our lives were thrown into chaos. It wasn’t just the lockdowns. What was incredibly conspicuous was the strange absence of opposition. One might have expected that a slew of intellectuals, not to mention political agitators, would have risen up in loud opposition, which might have caused the courts to act and the streets to fill with angry citizens.

What we got instead was… near silence.

To be sure, there were a few of us speaking out but it was strange. We felt like we were yelling into a hollow canyon. We had no real backing. In fact, it was worse. We were called terrible names. We couldn’t get an audience. We couldn’t get much attention for a contrary view at all.

As the months went on, finally a daring few figured out how to break the silence and the result was the Great Barrington Declaration. Almost immediately, the ceiling fell onto their heads. There was a concerted attempt to disparage them, smear them, destroy them, silence them. The people who signed the Declaration in earnest also faced reprisal and cancellation.

Their treatment itself was a foreshadowing. The purges began in all areas of society. Censorship blocked dissidents from posting in channels that could reach the multitudes. YouTube channels with vast followers disappeared overnight. LinkedIn took down accounts. Then the firings began, using vaccine compliance as the excuse. Academia, the public sector, corporations, media—everything was hit. The vaccine mandates provided a legal excuse to purge non-compliers.

Millions of lives were sent into a wild upheaval for a virus with a 99.8 percent survival rate and that would become endemic the way that all previous viruses had: through herd immunity. We look back with shock at what hit us. Now we live amidst the carnage, which includes travel and trade wreckage plus inflation that is shredding household budgets.

There seems to be no end to the upheaval, with political and social division more intense than at any time in memory. The world is no longer a safe place. We are now aware that our rights and liberties are conditional and can be taken away at any time. The post-pandemic, pre-war, pre-depression world today is governed by ideologies that pretend to be diametrically opposed but actually share enormous presumptions in common.

What’s being marginalized is simple. It is freedom itself.

My first concern when the lockdowns broke out was for the arts. This was for two reasons. On that dreadful day, I met two employees with a Broadway play who were sent home, by force of the Mayor’s orders. They didn’t know what they would do with their lives. They could scarcely believe the unfolding of events. In addition, I knew that in the awful 1968–69 flu pandemic there was no thought given to stopping the arts: Woodstock took place despite the risks, and that event shaped music for decades.

Little did I, or anyone, know what was in store for us. Two weeks lasted two years in many places, not just in the United States but all over the world. We live among the wreckage, among which is soaring inflation and a war that could widen regionally and even globally, alongside a rising threat of famine in previously prosperous countries. This disaster was neither foretold nor expected but it came anyway.

Back to the problem of silence. Those who should have spoken out did not. Why? It was a combination of factors ranging from ignorance to fear. Mostly it was about conformity with prevailing media and political messaging. In those days, the only approved emotion was fear and panic. Those who refused to go along were called astonishing names. Eventually they went quiet. Some people have never recovered from the psychological trauma.

In all the ensuing months, we saw the unfolding of the madness of crowds, both reacting to and fueling the state response.

Today, we live in a world ever more devoid of sanctuaries, places to protect and preserve, to keep great minds and great ideas safe. The surveillance state has made them ever less viable. Not even traditional island havens were safe. Still, we need sanctuary. We must innovate, be smart and strategic, and persevere with determination and courage.

People ask about the long-term vision of Brownstone Institute. It is to do exactly what we’ve done for the last year in the future, in both good times and bad: give voice to those who believe in principles, truth, and freedom, regardless of political winds. And we intend to continue to do this for many years ahead.

Many achievements of Brownstone so far are known (read and shared by tens of millions, cited in court filings and Congress, inspiring resistors globally) even as many achievements are unknown to protect privacy. The latter ones are the most important ones.

It is not only about resistance but also rebuilding, not giving up on the dream of peace and prosperity, along with logic, science, and truth, even when so many have stopped believing. We welcome supporters of this vision. Indeed we need you and so does the future of civilization.

They wanted to go medieval, and so we will, not through acquiescence to despotism but by dedicating our work to the rebuilding of the good life, guarding the right of truth to be heard, and supporting the ideas and people who are courageous enough to defend rights and freedoms when it matters most.