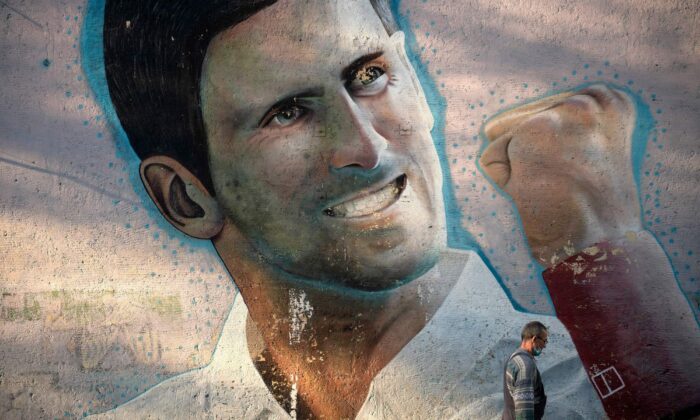 A man walks past a mural depicting Serbian tennis player Novak Djokovic, painted on the external wall of a primary school, in Belgrade, Serbia, on Jan. 14, 2022. (Oliver Bunic/AFP via Getty Images)
Viewpoints

The Monumental Sacrifice of Novak Djokovic

Defending Australian Open Champion Novak Djokovic was deported from Australia, the day before commencement of 2022 tournament play. He entered the country on a visa including a medical exemption based on a recent COVID infection. Due to public outcry over “special treatment,” his visa was revoked upon arrival in the country, only to be reinstated by a court. It was later revoked by an immigration minister, whose decision was upheld by another court, sending Djokovic packing—potentially for three years.

This draconian act puts Djokovic at a serious disadvantage in his Grand Slam rivalry with Rafael Nadal, who is competing in Australia this year after vocally supporting vaccines. Both champions, along with Roger Federer, currently hold 20 Grand Slam titles. Djokovic was favored to be the first to reach 21, but his decision to remain unvaccinated leaves Nadal alone with that opportunity for now. (Federer is out recovering from surgery.)

Djokovic was technically deported for not being vaccinated, but the decision lacks even a superficial “health and safety” justification. Djokovic already had COVID twice, once in early 2020 and again in December 2021. At the time of his deportation, he had been in Australia for ten days, and tested negative. He’s as healthy as a human being can be—you don’t earn “GOAT” status in the difficult sport of tennis any other way.

Further proof that Djokovic poses no disease threat to anyone is the fact that this tournament was safely played in January 2021, before vaccines were available for any player or guest. Even if Djokovic had taken the vaccine, he’d be no “safer” in terms of his ability to transmit the virus, as the 100,000 daily cases in highly-vaccinated Australia attest.

Even the government that deported Djokovic didn’t try very hard to frame its decision as the elimination of a health threat. Rather, it stated that Novak could become an “icon of free choice” if allowed to stay. Ironically, he will undoubtedly become that now that he’s made the supreme sacrifice of forfeiting his chance to play in order to openly oppose mandatory vaccination.

It’s not a good look for the COVID Regime if an avowed “anti-vaxxer” dominates the sport. The world audience might start thinking about the relative health status of “unvaccinated” people, particularly since athletes have been experiencing heart trouble all over the world—several already at the Australian Open practice courts.

As it stands, millions of Australians and others who have already taken the vaccine applaud the government’s decision. They can’t get the vaccine out of their bodies, so the next best thing is to make sure that everyone else has to put themselves into the same spot.

Nevermind the precedent it sets to allow a government to force people to choose between their health and their career. Such Sophie’s choices are normal these days.

The Regime would not have minded Djokovic playing in an unvaccinated state so long as he publicly expressed support for mandatory universal vaccination. He could have easily done this—a hero in Serbia, the wealthy star could have tapped any number of doctors to provide fake certification of vaccination. But that would have violated his principles.

In 2010, an “unwell” Djokovic was collapsing at tournaments, unable to complete strenuous matches. A doctor witnessing his condition on TV got in touch with the athlete, recommending that he eliminate gluten, dairy, and processed sugar from his diet. Novak thought it sounded strange but agreed to try, and it’s hard to argue with his results. His 2011 season was one of the best in men’s tennis history. On his new fuel, he was unstoppable. He ended the season with an unbelievable 10–1 record against Nadal and Federer, and compiled a 41-match winning streak.

This experience changed not only the tennis player. It fundamentally changed the man, as Djokovic explains in his book “Serve to Win”:

When it’s not being cared for, your body will send you signals: fatigue, insomnia, cramps, flus, colds, allergies. When that happens, will you ask yourself the questions that matter? Will you answer honestly and with an open mind?

Some people at the top feed off of negativity. The way I see it, pharmaceutical and food companies want people to feel fear. They want people to be sick. How many TV ads are for fast foods and medicines? And what’s at the root of those messages? We’ll make you feel better with our products. But even deeper down: We’ll make you fear that you don’t have enough of the things we say you need. It’s crazy — even when you’re completely healthy, they say you need [products] to stay that way.

Djokovic rejects Big food, Big Ag, Big Chemical, and Big Pharma. He doesn’t need them. His practices allow him to be healthy without any of their products—in fact, he’s achieved an elite level of health by actively avoiding their products.

There is no greater threat to the bottom line of these companies than people like Novak Djokovic. He is not scared, he is not anxious, so he can’t be manipulated or sold an easy fix. He can see the path to health takes hard work, and he’s willing to put it in. When they tell him that he can’t be healthy without a vaccine, he laughs in their faces. They can send him packing, but they can never take away his integrity and self-worth.

Novak Djokovic doesn’t want to lie to the public, making it appear as if he agrees with The System’s “path to health.” If he did that, he would get to play his tournament, but he would have millions of lives on his conscience. He’d rather give up his career’s crowning achievement in order to stand in truth. To send people the message: you CAN reject this tyranny. You do NOT have to comply. You can SAY NO, and you will be OK.

It’s easier for him, yes, with his millions of dollars. Health care workers on a middle-class salary will have a harder go of it. Military members faced with dishonorable discharge absent vaccination have it worse. But Djokovic has made it easier, at least, for everyone to publicly reject vaccination. If Novak openly rejects this vaccine, they can too, without shame. His very public deportation will hopefully get many people thinking about his approach to health, which if widely understood and adopted, will finally burn the COVID Regime to the ground—once and for all.

Stacey Rudin
Follow
Stacey Rudin is an attorney and writer in New Jersey.