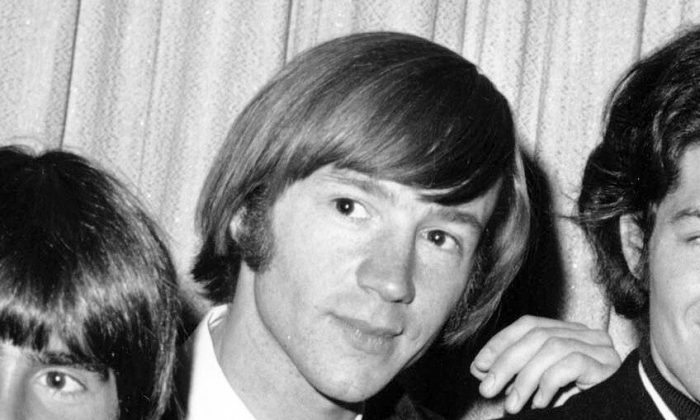 This June 4, 1967 file photo shows Peter Tork, center, of The Monkees at the 19th Annual Primetime Emmy Awards in Los Angeles. Tork, who rocketed to teen idol fame in 1965 playing the lovably clueless bass guitarist in the made-for-television rock band The Monkees, died Thursday, Feb. 21, 2019, of complications related to cancer, according to his son Ivan Iannoli. He was 77. (AP Photo)
Entertainment News

Peter Tork, a singer and guitarist with The Monkees, died at the age of 77, it was reported on Feb. 21.

“It is with beyond-heavy and broken hearts that we share the devastating news that our friend, mentor, teacher, and amazing soul, Peter Tork, has passed from this world,” Tork’s official Facebook account said on Feb. 21.

His sister, Anne Thorkelson, also confirmed the death to the Daily Mail.

Peter Tork was 24 and the band’s oldest member when “The Monkees” premiered in 1966.

Tork was diagnosed with tongue cancer in 2009, although his cause of death was not revealed in reports.

In 2009, he wrote for the Washington Post about his cancer diagnosis. “As of this writing, I’m just beginning to feel the effects of the second course of radiation, a bit of soreness on the tongue, some unpleasant effects when swallowing. So far, not too bad,” he stated.

He also wrote: “I recovered very quickly after my surgery, and I’ve been hoping that my better-than-average constitution will keep the worst effects of radiation at bay. My voice and energy still seem to be in decent shape, so maybe I can pull these gigs off after all.”

Peter Tork, the guitarist and wise-cracking character in the 1960s teen-pop sensation the Monkees, died at age 77

Mickey Dolenz, his bandmate, told the Mail: “When it came to Daydream Believer, which was really Davy’s song, we told the audience, ‘We can’t sing this song anymore—it belongs to you now, and they sang it instead.”

It is with beyond-heavy and broken hearts that we share the devastating news that our friend, mentor, teacher, and…

“There were moments of tension,” he stated. “But the Monkees never promised to stay together. People forget we started out as the cast of a TV show.”