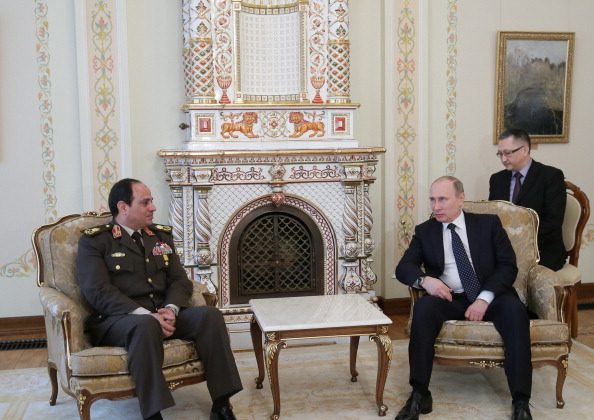 Russian President Vladimir Putin gave an AK-47 assault rifle to Egypt’s leader during a ceremony on Tuesday, according to reports. Putin was visiting Cairo, and he met with Egyptian leader Abdel Fattah el-Sisi.

Egypt also literally rolled out a red carpet for him, complete with an honor guard and singing children, according to CBS News. Egyptian media also gushed over Putin’s visit.

As The Independent reported, the Russian national anthem was “horribly mangled” when he visited. Putin didn’t seem too pleased with it.

NPR’s Cairo bureau chief, Leila Fadel, says Putin received a warm welcome on his arrival Monday night, as he walked down a red carpet flanked by soldiers in full military dress. Cairo’s streets are festooned with Russian flags and posters of Putin. The two men attended the opera and had dinner at a high-end restaurant that overlooks the city.