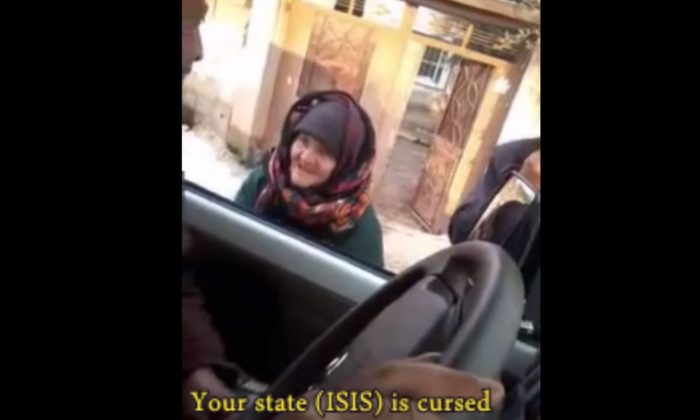 An elderly woman stood up to Islamic State (ISIS) militants in a video that was uploaded this week. (YouTube/screenshot)
Middle East

The Moment When an Elderly Woman Confronts ISIS Fighters: ‘Your State is Cursed’

An elderly woman stood up to Islamic State (ISIS) militants in a video that was uploaded this week.

The woman, who is wearing a headscarf, accosts two men before she refers to them as “demons” and tells them to stop their ways.

“Grandmother, what do you mean?” says one of the militants. “Everything is good between us, right?”

She then tells him: “Do not slaughter anyone and nobody will slaughter you. It’s all forbidden. … Not one of you will win anything, not you or Bashar (Al-Assad, the who is the leader of the Syria regime and enemy of ISIS).”

The woman also says that the state ISIS etched out, located in Iraq and Syria, “is cursed,” according to the Mirror. “God will not stop the regime nor will he make you successful,” she said, adding that “you only keep killing each other like donkeys.”

It’s unclear what happened to her after the video was uploaded, but in the video, the militants don’t appear to take any action toward her.

However, one of them issues a shocking warning: “We have come to you with slaughter,” which is the slogan for ISIS.

Meanwhile, several Islamic State fighters who led a suicide attack on an air base where U.S. and coalition forces are training Iraqi forces were killed by Iraqi government forces, the Pentagon said Friday.

Rear Adm. John Kirby, the Pentagon’s press secretary, said an estimated 20-25 Islamic State militants were involved in the attack on al-Asad air base in Anbar province. He said the attack was led by “at least several” suicide bombers, some of whom managed to detonate their bombs before they were killed by Iraqi troops.

No Iraqi or U.S. troops were killed or wounded, Kirby said.

Kirby also said Islamic State fighters had taken control of al-Baghdadi, a town near the al-Asad air base. He said this represented “the first (time) in at least a couple of months, if not more, where they have had any success in taking any new ground.”

Kirby said it was not clear whether the attackers at al-Asad managed to penetrate the perimeter of the base, which is a sprawling series of compounds. “Information is still coming in,” he said, that may clarify some details.