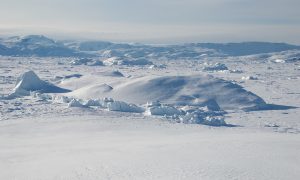 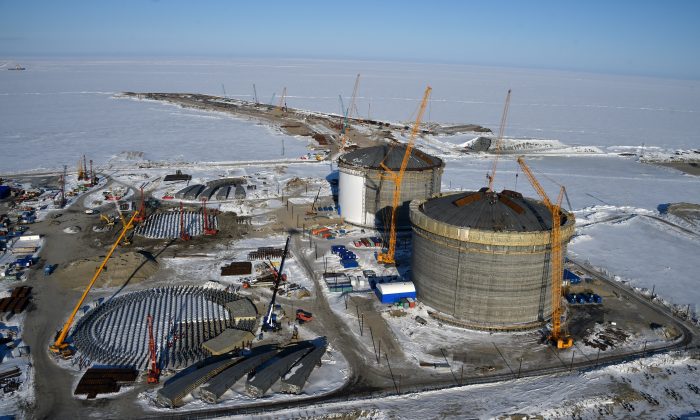 Natural gas reservoirs under construction at the port of Sabetta in the Kara Sea shore line on the Yamal Peninsula in the Arctic circle, some 1522 miles of Moscow, on April 16, 2015. The Yamal LNG (liquefied natural gas) project, from Russia's Novatek, aiming to extract and liquefy gas from the Yuzhno-Tambeyskoye gas field, is scheduled to start production in 2017. (Kirill Kudryavtsev/AFP/Getty Images)
Opinion

The Military Gambit Behind Putin’s Arctic Ambitions for Russian Oil

The U.S. Geological Survey has estimated that the Arctic regions contain around 130 billion barrels of liquids and 47 trillion cubic meters (1,660 trillion cubic feet) of gas, equivalent to 22 percent of the world’s undiscovered hydrocarbon resources. It is hardly surprising then that all the countries whose coasts encircle the region, the United States, Canada, Greenland, Norway, and Russia, have made claims on territory outside of the clear boundary for each, which stretches 200 nautical miles from their shoreline.

Russia has been the most active. President Vladimir Putin’s latest call was for Russia to be granted an extra 1.2 million square kilometers (over 463,000 square miles) of territory based on its historic claims that the Lomonosov Ridge, which runs across most of the region, is connected to the Russian mainland and is therefore part of its territory.

An initial claim was made in 2001, and was reiterated when a Russian submarine planted its country’s flag at the North Pole in 2007, but it is over the past three years that Russia has become particularly active in the region, focusing on offshore exploration for oil and the development of a new LNG plant for gas export. Its ultimate goal, however, is as much about establishing a new power base in the North as it is about gaining an advantage in the rush for resources.

Hydrocarbon licenses in the Arctic offshore regions have been reserved for Russia’s state companies, Gazprom and Rosneft. Rosneft has become the leader of Russian attempts to exploit its vast acreage there, but its lack of experience in offshore development has meant it has needed to rely on foreign company assistance, forming joint ventures with the U.S. firm ExxonMobil, Norway’s Statoil, and Italian group ENI to explore licenses in the Barents and South Kara Seas.

The Exxon venture has been particularly successful, making an initial discovery in September 2014 which could ultimately hold seven to nine billion barrels of oil. However, sanctions imposed on Russia by the United States and the European Union (EU) in reaction to the Ukraine crisis have meant that activity has now been halted, much to the annoyance of the Kremlin.

The collapse in the oil price over the past 12 months might well have had a similar effect in any case, as the economics of any oil and gas fields in the harsh and expensive environment north of the Arctic Circle are dubious. Even at $100 per barrel, many commentators were questioning the wisdom of pursuing projects that would cost many tens of billions of dollars to develop, while also bringing significant environmental risks in the case of oil spills or accidents.

Indeed some companies such as Total have decided to forego all Arctic activity for precisely this reason, and many others now see the opportunities offered by shale oil in the United States and other more conventional offshore fields as preferable in an environment where cost control is vital to survival.

However, this does not mean the Arctic has lost all its allure, especially as a long-term project with political as well as commercial objectives.

Russia’s oil production from its traditional West Siberian fields has proved remarkably robust in a low oil price environment, mainly thanks to the benefits of ruble devaluation, but decline is ultimately inevitable due to the maturity of the assets, and the Arctic offshore is seen as one major source of new output to sustain Russia’s overall production levels. The ExxonMobil discovery with Rosneft could ultimately produce 1 million barrels per day of oil, and the extent of Russia’s Arctic licenses suggests that this could be multiplied many times over by new discoveries—if the oil price recovers sufficiently to allow economic returns to be made.

The Russian government has played its part by offering a new tax regime with more attractive terms, and has also set another trend by offering some companies specific support to develop infrastructure in the region. One important example of this is Novatek’s Yamal Liquefied Natural Gas (LNG) project, which is an onshore gas liquefaction project in northern Siberia that is planned to be producing up to 16.5 million tons per year of LNG by 2020.

The logic behind Russian government support, either fiscal or practical (Russian state companies have built the port facilities for Yamal LNG and are providing ice-breaking tankers), is of course political as much as commercial. The Kremlin is keen to encourage the development of a region which has been starved of investment in the post-Soviet era but which is set to become much more geopolitically important as warmer weather starts to open sea-lanes that had previously been closed by ice for most of the year.

Novatek has already set a precedent by transporting gas condensate from Russia to Asia via the Northern Route, and its Yamal LNG project expects to be able to supply gas to China for five months a year via this shorter sea passage. It goes without saying that Russia’s opening up of the region can pave a way for other commercial operations and also for military use, as ports and other infrastructure created to support the oil and gas industry can be turned to multiple alternative uses.

The Finns feel particularly threatened by the reopening of Russian airfields in the Arctic region, while Russia plans to establish a standing Arctic military force by 2018.

The military context has been evident in exercises undertaken by the Russian navy in March and June this year, with the Finns feeling particularly threatened by the reopening of airfields in the region. Russia plans to establish a standing Arctic military force by 2018.

In this light, Putin’s claims for extra territory in the Arctic can be seen in two ways. Extra acreage can provide greater access to hydrocarbon resources for Russia’s state companies, although these may not be accessible economically depending on the price of oil and the ability of foreign companies to get involved given the current sanctions on Russia.

This commercial argument may take second place, though, to the drive for the Russian oil and gas industry to provide a platform for the country to dominate an increasingly accessible region as the ice starts to melt, with potentially huge geopolitical and military consequences.

James Henderson is a senior research fellow at the University of Oxford in the U.K. This article was previously published on TheConversation.com