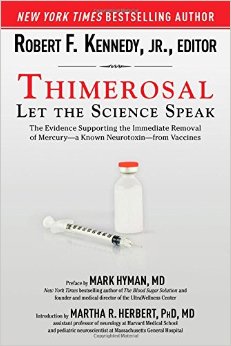 The mercury tipping point came to Robert F. Kennedy more than a decade ago. A champion of the environment, he was on a national speaking tour telling people about the dangers of coal power plants spewing tons of mercury into the air that, in essence, were poisoning humans and wildlife.

In each city he visited, parents of autistic children told him that too much mercury—in the form of the vaccine preservative thimerosal—was being used in the manufacturing of immunization shots. The more he heard about the problem, the more he started to look into the matter as a public health issue.

What he found disturbed him.

Kennedy learned he would also be practically alone on the radioactive issue from a political vista. That’s because the pharmaceutical industry had bought off U.S. politicians long ago via lobbying and mainstream media with its advertising juggernaut in the 1990s.

As the vice chairman and chief prosecuting attorney at Riverkeeper, a New York based non-profit organization chartered to preserve the conservation of the Hudson River, Robert F. Kennedy Jr. took on this new crusade to make vaccines safer, greener, while curbing the program’s mandatory doctrine and excesses that enrich big pharma.

On Friday night (4-24-15), Robert F. Kennedy Jr. was a guest on the HBO show Real Time with Bill Maher. In a lively discussion with the host (Episode #351), he laid out the facts that even small amounts of mercury, which was never eliminated from vaccines but merely reduced in the manufacturing process, contributed to the explosion of “ADHD, ADD, speech delays, neurological delays, peanut allergies, and autism,” he said.

Bill Maher replied in his casual style, “It just seems like we’re calling each other kooks and liars. And it seems like common sense that vaccines… I mean… even thimerosal, probably don’t hurt most people. I mean, if they did, we’d all be dead, because they’re in a lot of vaccines that we all took. But some do. Obviously, some minority gets hurt by this stuff. I don’t understand why this is controversial.”

So when will our government, industry leaders, and mainstream media begin to recognize the neurological poisoning as an epidemic?

From a brief on Mercury Poisoning from Coal-Fired Power Plants, by the National Wildlife Federation, it states:

“Mercury is a highly potent neurotoxin that adversely affects the function and development of the central nervous system in both people and wildlife. Exposure to mercury is particularly dangerous for pregnant and breastfeeding women, as well as children, since mercury is most harmful in the early stages of development.”

So if mercury particulates are dangerous to the long-term health of adults to breathe in the air, how much more harmful is it for infants to have mercury injected directly into their tiny bodies that are under development?

It’s even worse for fetuses in the womb when pregnant mothers get flu shots, which are loaded with thimerosal.

The Only Ones Immune are the Vaccine Makers

Robert F. Kennedy Jr. did have time, however, to spell out the quarter century that it took for the U.S. government to fully shield the pharmaceutical industry from product liability lawsuits. That was back in 1988 when Congress injected the provision in the National Vaccine Injury Compensation Program (NVICP) Act.

From there, all big pharma had to do was buyoff the Food and Drug Administration (FDA) and the Centers for Disease Control and Prevention (CDC) to ensure that more vaccines were added to the schedule, which for the past 15 years has three times the number of shots in the U.S. vaccine schedule than any other nation in the western hemisphere.

Then the crafty feint the U.S. government did with NVICP, or “Vaccine Court” as it’s known, was to gut the spirit and charter of the act. They rewrote the standard of injury to a victim of thimerosal by protecting mercury itself from such lawsuits.

In dismissing more than 5,000 cases, including that of my autistic son who suffered from thimerosal poisoning, Vaccine Court saved billions of dollars in compensation, tons of time at trial, while whittling the scope down to a few dozen cases out of more than one million children who live on the autism spectrum today.

By sweeping the autism epidemic under the rug, the CDC has saved money to U.S. taxpayers for now, but the problem won’t be going away. It will get far worse.

The government’s action with the stroke of a pen passed the problem of the delayed and dysfunction generation to a future president, congress, state and local governments. And it won’t be confined to healthcare or federal disability benefits. This tragedy will take more than 2 million (and counting) future productive adults out of colleges, universities, and the job market. Instead of making money, paying taxes, and contributing to the economy, they will become a major burden on society.

A Book and a Movie

Much of what Robert F. Kennedy Jr.—he took out a full-page ad in USA Today (4-24-15) weekend edition—said for the past decade can be found in his well-researched book he edited, Thimerosal: Let the Science Speak (Skyhorse Publishing).

It’s a book that this author read and found the purported bedrock studies, upon which the CDC built its claims that all vaccines are safe, have proven to be false, with skewed and manipulated data, and worse. More troubling is the fact that there has never been a real clinical trial (only studies of back-tested data) on vaccine safety. So what we know is next to nothing about the true effects of what vaccine ingredients, from thimerosal to three types of aluminum salts, does to an infant’s brain, nervous and immune systems.

This spring, a documentary film called Trace Amounts takes a blowtorch to the safety of mercury. There is no safe amount; it highlights Kennedy’s book.

What’s interesting about the film, a single tetanus shot several years ago derailed the career of a 27-year-old engineer, when he cut himself in the field on a rusty fence. It was the vaccine—not the metal disease of tetanus—that crippled Eric Gladen overnight.

What did Gladen discover? His life was brought to a near-death spiral by “trace amounts” of thimerosal in a single dose vaccine that injured his adult body and brain with symptoms of autism. Gladen’s recovery took him and environmental filmmaker Shiloh Levine on an odyssey from infant vaccines to coal-fired power plants and the dangers that mercury poses to society.

Mercury is not an element natural to human physiology. There is no vitamin ‘M’ that can be found at your local heath store. So why do we allow big pharma and the U.S. government to inject it into us at any level?