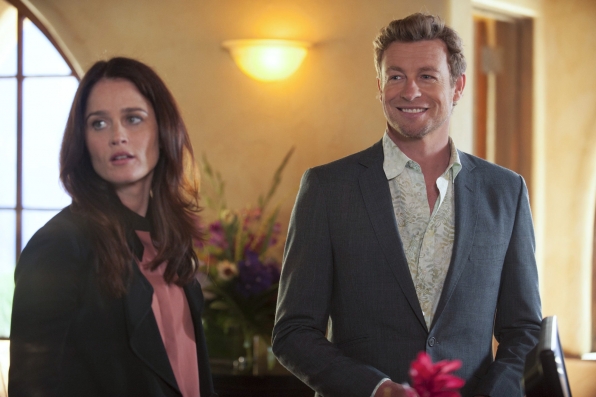 The Mentalist on CBS was finally renewed this month following lots of chatter that the network might cancel the program.

Season 7 will likely be the final season, with 13 episodes.

No premiere date has been announced, although CBS did say that the show won’t premiere until sometime in the middle of the fall season. That’s unlike the first six seasons, which all premiered in late September.

New program CSI: Cyber will take over the 10 p.m. timeslot on Sundays starting in the fall. The Mentalist season 7 will likely premiere sometime in December or January, in the middle of the season. It could be on a different timeslot, perhaps reverting back to one of its previous slots (Thursdays at 10 p.m. or Tuesdays at 9 p.m.).

CBS took a while to confirm a renewal for the show, prompting Warner Bros TV to shop it around to other networks, reportedly including TNT and Netflix.

No cast or storyline news has come out about the next season as of yet.

Meanwhile, the season 6 finale has been given an overview ahead of its airing:

“‘Blue Bird’ – A new lead in a cold case requires Lisbon to delay her plans to leave for Washington, D.C. with Agent Pike, giving Jane time to finally come to terms with his feelings for her and decide on a course of action.”

Lisbon’s decision is certainly big, actress Robin Tunney, who plays Lisbon, told TVGuide. Among the aspects is a romantic dinner Jane arranges for himself and Lisbon.

“There’s somebody who’s sort of declaring themselves, and I think there’s something really flattering about that,” said Tunney. “… That’s there on the table and it’s real. [Should she be] holding off on that for something that’s sort of not real and you’re sort of wondering if it’s been an imagined thing, or one-sided? I’ve been inviting Jane to declare himself and he hasn’t.”

Meanwhile, show creator Bruno Heller said that the finale will provide closure to the Jane-Lisbon storyline and also “opens up all kinds of new possibilities” for the characters.

“I think the fans will think of it as a very satisfying finale,” Heller said. “We’re very happy with where we’ve taken them.”