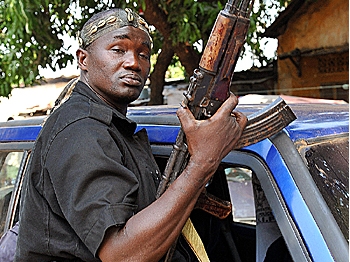 A mutinous soldier brandishes his weapon as he rides through the streets of Guinea's capital Conakry on December 24, 2008 in Conakry, following a coup. (Seyllou/AFP/Getty Images)
International

The Menace of Mercenaries

Chowa Cho
View profile
Follow
biggersmaller
Print
A United Nations group will study the impact of mercenary activities on human rights violation and obstruction to the rights of self government.

The group, headed by Columbian Amada Benavides de Pérez, is currently in Equatorial Guinea until Aug. 20 where mercenaries have been used in several coup attempts in the past.

“There have been some 12 reported coup attempts involving mercenaries in Equatorial Guinea since 1979, the most famous one being the one that occurred in March 2004 and which involved British and South African mercenaries,” said Amada Benavides in a statement prior to the trip.

The group hopes to find authentic information about the menace caused by mercenaries and their activities. They planned to meet local government official, army officers, politicians, and civil society members.

Another area of interest for the group is the activities of private military and security companies (PMSC), which are not the same as mercenaries.

The use of their services have significantly increased in conflict regions such as Afghanistan, the Balkans, Colombia, the Congo, Iraq, Somalia, and Sudan, according to a 2008 U.N. report.

PMSCs provide a wide range of services, including military training to military capabilities, right in the middle of war zones. The industry is growing very fast, recruiting thousands from both developing and developed countries, and generating enormous revenues.

U.N.-rapporteur José L. Gomez del Prado said in his 2008 report on mercenaries that more than 180 PMSCs in Iraq employ about 48,000 “private security guards,” and some 60 PMSCs in Afghanistan hire more than 18,000 people.

The international privatization of warfare and the demand for private security and protection are fast growing industries yielding between $100 billion and $120 billion annually, according to U.N. estimates in 2008.

In conflicts involving soldiers from private companies, civilian casualties are commonly reported, however, such incidents seldom led to any accountability on the part of these companies. The Council of Europe has voiced concern at the lack of transparency and accountability of the PMSCs.

The U.N. group has been pushing for international legal instruments for regulating private military and security companies.