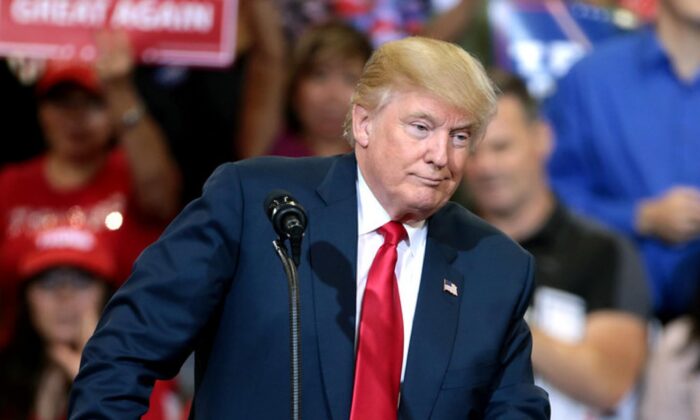 The Media’s Tale of Good and Evil Continues to Darken

Though I’m sure the humor was unintentional, the funniest headline of the year so far, in my opinion, appeared in Politico Magazine last week.

It read: “There’s a Huge Divide Among Democrats Over How Hard to Campaign for Democracy.”

The real “divide among Democrats” is over how much Trump hatred will motivate their not-already-highly-motivated voters before it starts to turn them off or leave them indifferent.

If the Democratic division had really been about “How Hard to Campaign for Democracy” there would have been no division at all, since everybody’s fervently pro-democracy. Or pretends to be.

But Politico, like much of the rest of the media, has grown so used to using “Democracy”—with or without a capital letter—as the flag under which their continuing war against the ex-president is being waged that they hardly even know they’re doing it anymore.

If you look in the Democratic Party dictionary under “Democracy” you will find something to this effect: “That which Donald Trump threatens—especially if he is democratically elected to a second term!”

Thus, when pretend media-critic Brian Stelter, widely regarded as a virulently partisan Trump-hater even among his fellow Trump-haters, got the sack at CNN this week, his valedictory apologia bleated: “I know it’s not partisan to stand up for decency and democracy and dialogue.”

In other words, standing up against the “demagogue” (guess who)—though of course he ordinarily did it sitting down—was standing up for democracy. The additional two Ds were presumably thrown in for good measure—to help “frame” his and his network’s unrelenting negativity about the Donald as a positive thing.

I wonder, however, if it comes across to anyone else as it does to me: like they’re afraid to say the name of the monster they loathe and fear ‘lest, like the Devil, he should appear? Thus, too, the proto-Russians of the Eurasian steppes were so afraid of bears that they referred to this creature only by the euphemism “honey-eater” (medved)—the Russian word for bear to this day.

At any rate, Trump and “threat to democracy” have become almost synonymous in media-speak—at least partly so as to create the illusion that, since almost everyone may be expected to feel protective towards democracy, almost everyone must hate the bad Orange Man as much as the media do.

Thus when Chuck Todd of NBC breathlessly announced a new poll showing that, “for the first time ever, when asked what is the most important issue facing this country, the top answer was not an economic issue. It was threats to democracy.” As my friend Byron York pointed out, it was “the first time ever” only because it was the first time the question had been asked in this way.

And why do you suppose that was? Because it had never before occurred either to the pollsters or the polled that democracy was under threat. If it were, the poll’s respondents must have reasoned, that would be “the most important issue facing the country.”

Celebrity atheist Sam Harris certainly must have thought so when he raised the stakes even further by telling an interviewer in Britain that you-know-who was “an existential threat to democracy”—so much so, he said, that any criminality on the part of his 2020 election opponent or his family—up to and including  the murder of children—could have been excused, as Hunter Biden’s influence peddling was, if kept him from another term in the White House.

Obviously, rigging an election for the same purpose would be totally justified—not that anyone we know would do a thing like that.

Rhetoric like this must sound absurd, even insane, to anyone outside the media bubble, but it has a logic of its own which makes it self-perpetuating.

From there we must suppose it to be but a short step to say that the evil one’s supporters are also evil and, therefore, also an existential threat to you and all you care about. What else is there to say about such people except that, presumptively, they are not fit to live in freedom, or perhaps to live at all.

That we may be perilously close to taking that final step is suggested by a post on Twitter—that vanguard of media malice—by the former CIA director, Gen. Michael Hayden, enthusiastically seconding the tweet of a left-wing journalist.

Edward G. Luce of the (London) Financial Times wrote: “I’ve covered extremism and violent ideologies around the world over my career. Have never come across a political force more nihilistic, dangerous, and contemptible than today’s Republicans. Nothing close.”

“Republicans,” mind you. Not just Trump, or his family and inner circle, or those who served in his administration, or those who have ever had a good word to say for him, but Republicans, who at last count made up about a third of the country. The lot of them. They’re all way, way worse than the worst terrorists—as, I suppose, you might expect of an existential threat.

Hayden, who was appointed to his job at the CIA by a Republican president, wrote: “I agree. And I was the CIA director.”

Much has been written about Trump Derangement Syndrome, but I don’t think I’ve seen a more severe case of it. It has become what the philosopher Kierkegaard called “the sickness unto death.” Let’s hope it doesn’t also become the next pandemic.

Many centuries ago, in the early years of the Christian era, Christianity’s principal rival for the hearts and minds of believers was something called Manichaeism, which worshiped a god called Mani and was a dualistic faith, dividing the world into the good and the evil—light and darkness.

Christianity, by contrast, taught that we were all sinners, and none of us was so good as to be able look down from a great moral height on our less-virtuous brethren.

Through all the centuries since, Christian heresies have tended to take the Manichaean form, dividing the world into the Good, sometimes called God’s Elect, and the Bad, sometimes identified as the damned to Hell.

The heresy of Marxism has a different and entirely secular eschatology, but is recognizably cut from the same cloth.

The latest heresy, sometimes referred to as “Woke-ism,” is no exception. The good news is that, perhaps because the posture of extreme self-righteousness is one that it is difficult to sustain for more than a few decades, Christianity has always managed to outlast its many rivals for the hearts of men. Up until now, anyway.