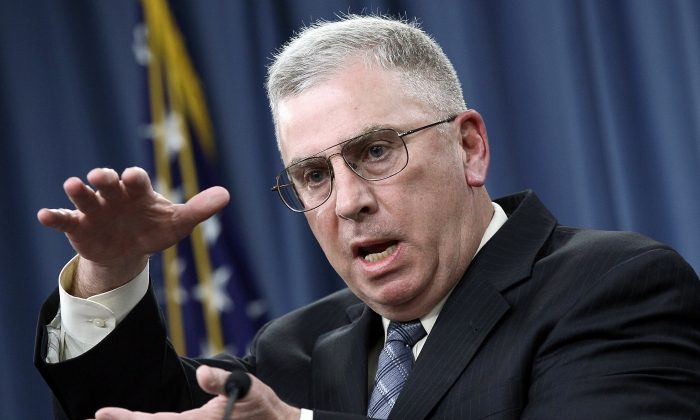 Retired Gen. John Abizaid conducts a briefing at the Pentagon on Feb. 28, 2012. Abizaid co-chaired the blue-ribbon committee of the United States Institute of Peace, along with former secretary of defense William Perry. (Photo by Win McNamee/Getty Images)
Opinion

“News is what I say it is,” said Charles Foster Kane, the legendary (though fictional) press baron. Sadly, today’s media bosses also dictate what news isn’t, by failing to cover important issues that may not be visual, simple, or politically convenient.

Recent headlines have been restrained compared with the sensational images that prompted them. First came footage of Yazidi refugees fleeing to a mountaintop, followed by the announcement of humanitarian airdrops and the possibility of a military rescue. Then, stills from the horrific video of James Foley just before his execution, followed by reports of limited U.S. airstrikes against ISIL vehicles. Two weeks after Foley’s murder, we witnessed the beheading of journalist Steven Sotloff, and we now await President Obama’s speech on how he will pursue a U.S. military campaign against ISIL.

Missing from mainstream media coverage is the nation’s declining ability to undertake either of these military missions—amplified by recent findings from a think tank whose mission, ironically, is to promote peace. In July, a blue-ribbon panel under the auspices of the United States Institute of Peace issued a report saying that the United States is inadequately prepared for war. The USIP assessment is far more pessimistic than any similar recent study. A bipartisan group—co-chaired by former Defense Secretary William Perry and retired Army Gen. John Abizaid—was unusually candid in its language and unanimous in its conclusions.

The panel argued that the Air Force is too old, the Navy is too small, and the cost of paying for military retirees’ health care is too high. It said that Pentagon budget cuts—exacerbated by sequestration—”constitute a serious strategic misstep.” Lack of adequate spending and preparation “will lead to an America that is not only less secure, but also far less prosperous.”

The panel issued its report in response to a congressional mandate that the Obama administration’s “Quadrennial Defense Review” (QDR) include an independent assessment. “Attempting to address America’s budget woes through defense spending cuts is dangerous and ultimately self-defeating,” the authors write. In an “unstable world, an America less capable of global leadership will soon become a poorer America less capable of meeting its other federal priorities.” The report urged the administration and Congress to move quickly to address the deteriorating situation.

I asked Paul Hughes, the panel’s executive director, why the report had gotten so little media coverage. “I think people are scared of confronting this issue,” he said. “The subtitle of the report should be ‘Sequestration needs to be repealed.’ Everybody is comfortable with the balanced budget act that was crafted. But it ends in October 2015. Congress and the White House need to get back together again. And that is scary for some people.”

Richard Wald, a former president of NBC News and ABC News, and currently the Fred Friendly professor at Columbia Journalism School, said: “Never underestimate the time lag. The press tends to report what it notices. On some issues, it notices things late. That’s why some outlets get big reputations for spotting things of value when others have overlooked them. … It is not today’s headline issue. You are talking about the mass-circulation press. Ferguson or ISIS trumps a USIP assessment.”

One of the sharper congressional aides I know, whose boss is well-informed on defense matters, had a similar take. “The major publications have just one or two defense/national security reporters and they’ve got them focused on Iraq, Ukraine, Gaza, etc. I have tried multiple times to get these people interested in the QDR but they claim they just don’t have the ‘bandwidth.’ They’re over-tasked with the daily story. And they think there is little public interest in these types of strategy/procurement issues to justify that diversion of resources.”

I also heard less reasonable explanations from so-called media experts. “If I were you I would not trust anyone willing to answer that question,” one journalism professor told me. “The number of possible reasons for not doing something approaches infinity.” Another teacher from the same top school said, “I don’t subscribe to the panel’s conclusion.” (He had not read the QDR or the panel’s report.) Then he added, “The mainstream press is not likely to challenge the conventional wisdom.” And the conventional wisdom emerging from the Obama administration is that significant defense budget cuts are precisely what we need.

As I pondered the USIP assessment, I saw news footage of aircraft from the carrier USS George H.W. Bush attacking an ISIL truck somewhere in Iraq. The coverage did not mention that the Bush had been diverted from its assignment to provide support to U.S. troops in Afghanistan. Nor was there mention that, until this past weekend, the Navy had only two aircraft carriers deployed anywhere in the world. A third—the last available for immediate mobilization—just sailed for the Western Pacific. Given the recent harassment of U.S. patrol aircraft by Chinese fighters, the long-scheduled deployment could not have come too soon.

Perhaps the best explanation why there has been so little discussion about the adequacy of military funding came from William Butler, a retired media executive and graduate of the Walter Cronkite School of Journalism at Arizona State. “Try this thought experiment,” he said. “Imagine the USIP panel concluded the nation was wildly over-prepared for war. What would happen then?”

Columbia’s Wald said that mainstream coverage was unlikely so long as editors, publishers, and media executives don’t feel they have “a horse in the race.” But they do. All of us do.Steve Cohen is an attorney at KDLM in New York, and a former director of the United States Naval Institute. This article originally appeared on the Manhattan Institute’s City Journal website.