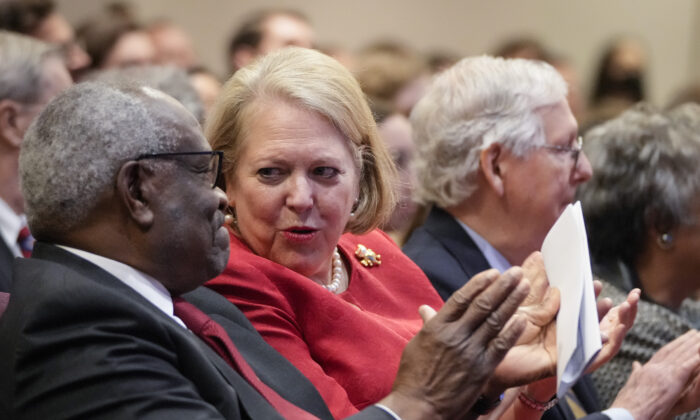 Associate Supreme Court Justice Clarence Thomas sits with his wife and conservative activist Virginia Thomas while he waits to speak at the Heritage Foundation in Washington, D.C., on Oct. 21, 2021. (Drew Angerer/Getty Images)
Viewpoints

We’re only a few weeks away from the Supreme Court’s likely official release of its draft decision overturning Roe v. Wade—so it’s time for another media attack on Virginia “Ginni” Thomas, wife of the conservative Justice Clarence Thomas, one of the five who signed the draft majority opinion written by Justice Samuel Alito.

​And sure enough, the attack is already on the ground. The Washington Post reported on May 20 that Ginni Thomas had sent emails to two Republican state legislators in Arizona a few days after the 2020 presidential election urging them to “stand strong” and “fight back” against “fraud” in the election. She followed up with similar pleas in a December 2020 email just before the Electoral College voted to certify Democrat Joe Biden’s victory.

“The messages show that Thomas, a staunch supporter of Donald Trump, was more deeply involved in the effort to overturn Biden’s win than has been previously reported,” the Post’s journalistic moralists intoned. “In sending the emails, Thomas played a role in the extraordinary scheme to keep Trump in office by substituting the will of legislatures for the will of voters.”

“Extraordinary scheme”? In fact, Biden had won swing-state Arizona by only about 10,000 votes, and although a later bipartisan investigation found no systematic election fraud, there had been irregularities in the reception and counting of mail-in ballots that have led to calls for reform.

As for defying the “will of voters”—remember the 2016 presidential election? That was the season of media promotion of so-called “faithless electors” embodying the vain hope of many Democrats that state electors might, yes, defy the will of the voters who had made Trump the winner in their home states and instead send Hillary Clinton to the White House.

“Let’s call electors who refuse to rubber-stamp the popular vote conscientious electors, and let’s give them the resources and the protection to investigate and deliberate — in short, to do their jobs,” Vox contributor Michael Signer wrote in December 2016.

Signer, then the mayor of Charlottesville, Virginia, argued that the drafters of the Constitution actually intended for presidential electors to set aside the votes of their states’ constituents in order to prevent an “unquestionable demagogue” like Trump from taking office. Since Article 2 of the Constitution also gives state legislatures broad discretion to appoint electors, Ginni Thomas’s pleas to Arizona legislators to take a second look at the 2020 results in that state scarcely seem eyebrow-raising in light of the left’s efforts to influence electoral votes in 2016.

The media war against her has been going on for some time. On Jan. 21, the New Yorker’s Jane Mayer published a 7,000-word hit piece titled “Is Ginni Thomas a Threat to the Supreme Court?” The piece dwelt on the fact that Thomas had been present at Trump’s Jan. 6, 2020, rally that had preceded an invasion of the U.S Capitol by several hundred Trump supporters (Thomas had left the rally before Trump appeared). Mayer, whose co-written 1994 book, “Strange Justice,” had portrayed Clarence Thomas as a sexual harasser and all-around degenerate, implied that Ginni Thomas’s vocal support of conservative causes, including Trump’s challenge to the 2020 election results, was improperly influencing her husband’s Supreme Court opinions.

Three days later, New Republic editor Michael Tomasky called for Clarence Thomas’s impeachment. He pointed out that Thomas had been the lone dissenter in a Supreme Court ruling that Trump couldn’t block the release of documents related to the Jan. 6 “insurrection,” as progressives like to call it.

“It’s just the most recent example where she has been involved in activities that directly or indirectly place her activism before the court, and her husband does not care how corrupt it looks,” Tomasky wrote.

Then, on March 24, The Washington Post released the contents of about two dozen text messages Ginni Thomas had sent in November 2020 to Mark Meadows, then Trump’s chief of staff, urging him to battle against electoral efforts by the “Biden crime family” to carry out the “greatest Heist” in American history.

Calling her actions on Trump’s behalf “shameful,” CNN legal analyst Elliot Williams pronounced, “Even if we are to believe that he and his wife don’t discuss work at home, Justice Thomas should stop hearing January 6 cases.”

To those who argued that it was sexist to suggest that a jurist’s wife could not advance her own political opinions, Slate’s Dahlia Lithwick had this rejoinder: “That’s a convenient cover to evade the reality that she is an interested party in litigation that is coming before her husband, and that both he and she now appear to have an improper interest in the outcomes of those cases.”

Lithwick praised a recent push by Sen. Elizabeth Warren (D-Mass.) and other congressional Democrats to impose “a binding code of conduct” on Supreme Court justices that would presumably bar Clarence Thomas from hearing future Trump-related disputes.

But anyone who thinks that the media’s smear crusade against Ginni Thomas is actually about Jan. 6 or Donald Trump ought to think again. The real target isn’t Clarence Thomas’s unwillingness to recuse himself in a documents-release case relating to a former president whom his wife vociferously supported. It’s Clarence Thomas himself.

Right now, at age 73 and with the impending retirement of Justice Stephen Breyer, he is the most age-vulnerable member of the Supreme Court, and there were plenty of progressives gleefully hoping for his death when he was recently hospitalized.

As Jane Mayer pointed out in the New Yorker, Ginni Thomas has been active in pro-life as well as pro-Trump causes, and thanks to the leak of the Supreme Court’s draft opinion on abortion, we know her husband’s constitutional views on that issue, too.

It would be nice for progressives, wouldn’t it, if our system could legally force the recusal—or better yet, the impeachment—of every conservative Supreme Court justice whose spouse expressed forceful views on this and other conservative issues? We might start with the neutralization of Clarence Thomas.