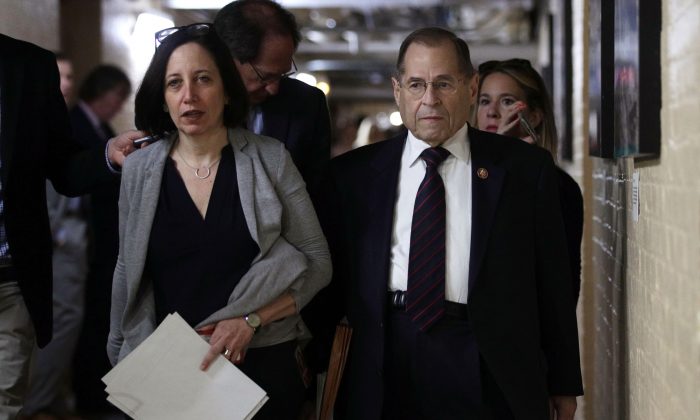 The Meaning Behind the Democrats’ Infighting Regarding Impeachment

If the Democrats had anything that they could utilize to impeach President Donald Trump, they would have done so already.

Instead, more than two years have passed since Donald Trump became president, and the Democrats find themselves fighting among themselves. Some are pushing House Speaker Nancy Pelosi (D-Calif.) to initiate the impeachment process against the president, while others are a bit more hesitant because of the potential political fallout.

The fact that Democrats have been unable or unwilling to submit articles of impeachment against Trump after more than two years is very telling.

Publicly, they allegedly want to impeach the president. However, as the old cliché goes, talk is cheap. The fact that they haven’t done so to date shows that their push for impeachment is a game of political theater, while any grounds for impeachment are weak, at best.

Another reason why the Democrats have not pursued impeachment likely revolves around the fact that the odds of successfully impeaching and removing Trump from office are incredibly slim, given the high threshold for removal and the current make-up of the Senate. While the Democratic-controlled House would likely vote to impeach the president, the Republican-controlled Senate wouldn’t remove him from office at this time.

Third, Democrats are concerned with the potential political ramifications associated with the impeachment process (especially one that is unsuccessful). As one Democrat recognized, people are getting worn out talking about impeachment and want their issues addressed. Some Democratic voters felt that impeachment would actually help Trump in 2020.

What Democrats really want is publicity. They want to continue to smear the president and to tarnish him in the eyes of the American public. Ideally, they would love to “impeach” the president without going through the formalities of the impeachment process, due to the likely political fallout. This is precisely why House Judiciary Committee Chairman Jerry Nadler (D-N.Y.) and other congressional Democrats have initiated various investigations and subpoenaed various individuals related to Trump, the debunked Russia collusion narrative, and the Mueller investigation.

While they assert that they are “doing their job” as an investigative (oversight) unit, this argument is severely flawed given their defiance and unwillingness to investigate other possible wrongdoings committed by people unrelated to Trump or his team (i.e. the Russia dossier, the bleached emails, etc.). Their sole obsession with Trump also bolsters the argument that they are using the threat of impeachment for political purposes.

Despite their efforts, congressional Democrats have been “outmaneuvered” by Trump, whose team has fought the subpoenas and blocked certain individuals from complying with the various congressional subpoenas. In doing so, the president has left Nadler and his cohorts in a difficult position. They will either have to impeach the president, which carries serious political risks, or forget about impeachment and utilize the courts to compel these individuals to comply. The latter method could take some time and hurt the investigators’ relationship with those in their party who strongly support impeachment. The Democrats are facing a double-edged sword of their own making.

The impeachment process was never meant to be a political tool. It wasn’t meant to be utilized as a means for one party to get rid of a duly elected president because the party didn’t like the president or his policies.

According to an article in the Berkeley Political Review:

“Kenneth Starr, who led the Clinton investigation, says America does not deserve to go through impeachment and argues that “Impeachment is hell.” If impeachment becomes a new political weapon, we will see a permanent impeachment campaign in this country that will overshadow activism and meaningful policy changes while the American people will continue to lose faith in our government. The weaponization of the impeachment process would be a major loss for a country that is already divided both socially and politically and a loss for democracy.”

Congressional Democrats have a problem that they brought on themselves. For years, they have threatened to impeach the president without any basis whatsoever. Many Americans are sick and tired of their empty threats.

According to a recent Washington Post-ABC News poll, only 37 percent of Americans favored starting impeachment proceedings, while 56 percent opposed such efforts. Moreover, 59 percent of independents opposed impeachment. Given these numbers, it is no surprise that congressional Democrats are arguing behind closed doors.

They don’t know what to do and time is slowly running out.