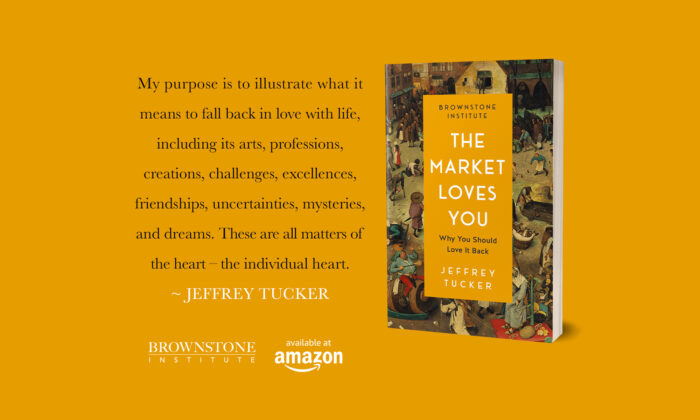 The Market Still Loves You

This book—“The Market Loves You,” now in its second edition—was written in the Before Times. Looking back through it, I’m reminded of what I cared about before the world fell apart with lockdowns, mandates, and the ensuing existential crisis of civilization itself.

I wondered at first if this book mattered anymore but now I’m sure it does. The theme is meaning. Not big meaning but meaning in small things. The meaning of everyday life. Finding friendship, mission, passion, and love in the course of working out one’s life in the framework of a commercial society, which should not be narrowly construed as only a way of paying bills but rather should be seen as the instantiation of a life well-lived. We were not doing a good job of that, so my thinking when I wrote it was to inspire people to come to love what we take for granted.

A conversation I had with a smart 20-something early after lockdowns hit still haunts me. I asked why she and it seemed like her whole generation were so eager to comply. They were living a good life but then signed up full on with all the lockdown nonsense even though the data was clear they were not among the vulnerable. They all could have risked exposure—as we all must do every day in all normal times—and shaken it off with an upgraded immune system. Why did they all go along?

“Because for me and everyone I know, this is the first thing that has ever happened to us.”

Happened. What does that mean? Well, her whole life so long as she could ever remember had been scripted. Her earliest memories were learning how to sit in a chair and listen to an authority. That early memory became her whole life from 6 to 18 until college, which then was just a four-year vacation from reality at her parent’s expense. Next came the internships, all of which were designed to snag the highest-paid position with social standing. What was the goal? Keep the money flowing, hang out, fuss around with the internet, dress well. Or something.

So, yes, not much happening. Where is the challenge? Where is the drama? Where is the struggle against adversity? There was not much if any at all. Nothing big, nothing important, ever happened to her. What goes for her goes for multitudes of others. So the visit of a virus seemed like something glorious, something at least different. Something that required sacrifice, belief, conflict, struggle. It was existential. It was meaningful. Lockdown ideology was a replacement for a life without meaning.

I do not believe that bourgeois civilization must be this way. But we have constructed it so. We’ve caged the kids for 12-16 years. We have bureaucratized the office. We have cartelized industry and markets. We have denied many the chance to get ahead. We have segregated and classified the whole population. We have made safety a religion and obedience to authority a creed. We have demonized difference. We have canceled dissent. All of this was true in the Before Times.

In the crisis of 2020, the anger, the frustration, the nihilism, the loss of direction, and the resentment against the caging and life in the system all boiled over and were redirected toward a single goal: pathogenic avoidance. There was a clear message, a clear dictate, and a clear goal with numbers to back it up. All the other complications of life faded into the background as the population rallied around this one purpose. It gave multitudes of people meaning.

It’s impossible not to notice that the people who avoided the frenzy and panic were older and tended to be religious. They had more life experience and they found a source of meaning outside of civic culture. They had a North Star and it was not the CDC. So they were less susceptible to manipulation. The rest, not so much. And so vast swaths of the population behaved like cartoons from history: flagellants, Red Guard enforcers, Prince Prosperos of the laptop class, scolds and scapegoaters. It was painful to watch.

Would this crisis have afflicted us had we as a culture believed in something more meaningful, something such as freedom and all that we did within those freedoms? Doubtful. This is one reason that the crisis of 2020 and following shocked me so much and why I ended up writing one of the first books opposing lockdowns and another thousand or so articles.

I simply could not figure out how it was that so many were so confused and easily led. As I look through the essays of this volume, I can see now why I was so alarmed. I was completely unaware that the foundations of a meaningful life had already crumbled under the feet of so many people.

This is why this book is in a second edition. The purpose is to illustrate what it means to fall back in love with life, including its arts, professions, creations, challenges, excellences, friendships, uncertainties, mysteries, and dreams. These are all matters of the heart—the individual heart. There is no escaping them. No grand project dictated to us by government, media, and Big Tech can substitute.

My only discomfort with the book is the title: the use of the term market. I like it but I’m aware that it might come across as too centered on economics alone, narrowly construed. That is not what I mean. My purpose here is to say that markets and life cannot be separated. Abolish one—we ended up trying that—and you radically diminish the other. The CDC and Twitter are not replacements for a life well-lived.

This book also serves as a good goal for me too. The pandemic response changed us all. We cannot help that. It’s fine if it makes us wiser and less naïve. What we do not want is to allow them to gut us of joy and optimism. Rebuilding is in fact possible. There is a sense in which this book might help point the way forward. It is dedicated to my mother because it is she who has always done that for me.