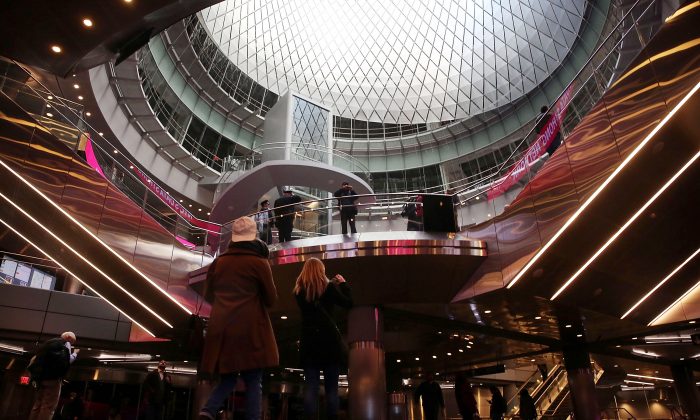 In economics, nobody likes it but everybody has to live with it: uncertainty. It makes business decisions difficult and wreaks havoc in economic models. This is why mainstream economics oftentimes ignores it and assumes we have complete certainty in economic planning.

Not so Horace “Woody” Brock. A mathematical economist by training, he embraced Economics of Uncertainty and founded his consulting firm Strategic Economic Decisions after doing extensive research at Stanford University.

His most recent book is called “American Gridlock,” where he proposes common sense solutions to economic crises.

When you borrow my $10 trillion proposal over 20 years, redo our infrastructure. That’s not borrowing, that’s investing.

Epoch Times spoke to Woody Brock about why infrastructure spending is the magic bullet to rekindle growth in the United States and why China has overdone it; why workers don’t need to fear competition from robots; how the standard of living for the average person is actually rising despite an increase is income inequality; and how China needs to completely change its economic model to reach the next stage.

Epoch Times: Why is infrastructure investment so important and why can it be profitable?

Woody Brock: The question is: What can be done that would raise GDP? Oh, and is it needed? The thing that could be done is the only thing we haven’t tried—capital spending by government; that is to say, infrastructure: roads, tunnels, a new electric grid.

You should never borrow from the children and do infrastructure if it amounts to drilling holes to nowhere or roads to nowhere. You must have a high rate of return—like the Louisiana Purchase; like the Internet, which was called the ARPANet (solely developed by government); the Erie Canal; the land along the railroads which caused the railroads to be built; and the interstate highway system.

There is no such thing as a deficit. Even though we call it a deficit, when you borrow my $10 trillion proposal over 20 years, redo our infrastructure, that’s not borrowing, that’s investing.

Epoch Times: How can you repay the debt?

Mr. Brock: Let me make the key point though, mathematically: You don’t borrow from the children and invest in infrastructure unless the rate of return is high, properly measured with the externalities of a public good.

Infrastructure, however, increases productivity, which is how you pay off the children.

Everybody thinks that all borrowing is bad. Oh Mr. Jefferson, you’re naughty. This country is new in 1807 and we couldn’t afford $15 million. We couldn’t borrow. Mr. Jefferson you’re a sinner to borrow money. Then he made the best investment in the history of the world [The Lousiana Purchase].

Deficits are wonderful if you spend the money properly.

Epoch Times: The government has to pick up the slack from the private sector?

Mr. Brock: Sometimes it’s an important priority and sometimes it is not. The point here is the level of total investment spending, private and public. There are times when money should go to private investment such as building houses for all the soldiers returning from the war in the early ’50s, because the rate of return is highest when you invest in housing under those circumstances. The money should and did go there.

There are other times like today when private citizens have been shell-shocked. They are not building new houses; they have lost all their money in houses. Corporate investment is stagnant because we live in a slow-rolling economy.

So let’s just say we get a $3 trillion public infrastructure proposal. People think it’s just the government spending that money.

But here’s how it works: If the projected electric grid costs $3 trillion, the government sponsors this and gives American electric power corporations a down payment for the first year of $1 trillion, 5 years later a second $1 trillion and so on.

When the money goes to the bank, Citibank gets a $1 trillion check from the government for the electric power companies and then says: “Oh we’ll now give you a line of credit for two more trillion out of private sector savings.”

Epoch Times: How do we create jobs?

Mr. Brock: When you do what the United States did, borrow $10 trillion and not invest any of it except for $33 billion, and you borrow and you spend it on transfer payments like preventing 100,000 government workers from being fired, it’s very nice for the government workers. They did not lose their jobs, but not one new job was opened and you did nothing to raise productivity.

So the children are now $10 trillion in debt, nothing to show for it. “Screw the children, they’ll pay for it,” that’s the idea.

Infrastructure, however, increases productivity, which is how you pay off the children.

Job creation from infrastructure has a fabulous multiplier.

With infrastructure you create a new job. Your company beefs up and hires more people, they hire more people, more lunches have to be served and the multiplier is huge. This has been well known forever. Transfer payments on the other hand have a zero net multiplier.

Job creation from infrastructure has a fabulous multiplier, therefore for this particular time in history, at least in the United States—not Switzerland and Japan which don’t need it—we desperately need infrastructure.

Epoch Times: What is so special about the electrical grid?

Mr. Brock: It is so critical that we replace our electric grid because even our Director of Homeland Security admitted we’re defenseless against attacks which will bring down our power grid. We now know that both Russia and China are inside our power grid net.

Using randomized technologies from MIT, it is possible to have a new grid, which is called “decomposable,” where you don’t have all these linkages which they can bring down.

Therefore, I think the president ought to declare it a matter of national security, ram the proposal through. There will be no lawsuits, no complaints. It’s national security. This is what Eisenhower did with the interstate highway system.

Epoch Times: Could you say more about the rates of return of infrastructure?

Mr. Brock: I think they’re huge. To put it this way, what happens to the efficiency of transportation around the country is a good point.

When bridges are falling in, don’t work, and there are potholes, you raise the cost of shipping greatly. That is known as inefficiency. It shouldn’t happen, it wouldn’t happen with good roads.

New York City faces the collapse of one of its tunnels to New Jersey. This could cost 10 percent of New York’s GDP if you couldn’t ship goods. The tunnel’s 100 years old. It’s pathetic. It should’ve been replaced 50 years ago. It was proposed 60 years ago, but they haven’t done a thing about it.

Deficits are wonderful if you spend the money properly.

For example, the interstate highway system, how do you pay for it? Well, government and the private sector sponsor it, then you charge people tolls. Well, you’d have to charge too much in tolls to pay for that.

They didn’t charge a toll because you pay for it indirectly. The existence of the network of roads, 30,000 miles, created 300,000 miles of private roads, 64 new cities, and GDP doubled. You pay indirectly.

Boston’s $15 billion “Big Dig” was supposed to be $3 billion and ended up $15 billion. It’s a classic example of something that was a waste and shouldn’t have been done.

But they put all the highways in central Boston underground and created a new city. It’s now making a fabulous rate of return on $15 billion because 14 new communities along the coast grew up.

The rate of return of new projects increases exponentially the more your infrastructure has depreciated.

Epoch Times: How do you make sure the right projects are chosen?

Mr. Brock: There should be an office doing it. There ought to be an office saying the bullet train from San Francisco to L.A. is a basket case idea and nobody is going to use it. While one from Boston to Washington has a huge rate of return; you figure out the details.

What has the government been doing with trillions of dollars, if they can’t even have people rating 20 projects in terms of relative rate of return? If I’m your president, I’m going to say that we set up a special department with a special supervisor and all we do is focus on infrastructure, end of story.