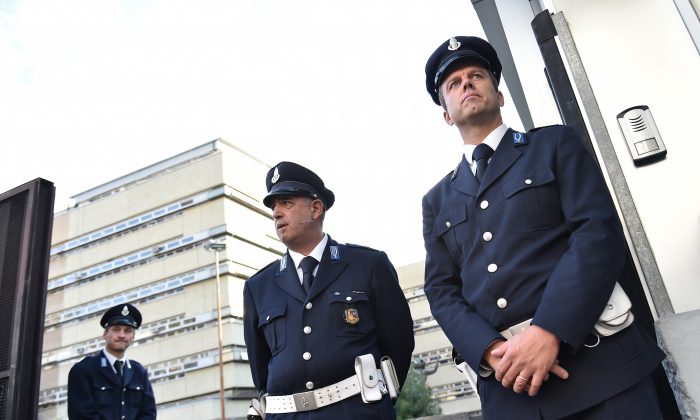 Guards stand at the entrance to Rome's criminal court on Nov. 5, 2015, on the opening day of the Mafia Capitale trial, a case related to the alleged infiltration of City Hall by a mafia network. (Alberto Pizzoli/AFP/Getty Images)
Europe

The Mafia Mega-Trial That Has Italy on Tenterhooks

After months of preparation, the massive trial of alleged participants in the “Mafia Capitale” criminal network is now underway in Rome. The majority of arrests were carried out in a swoop on Dec. 2, 2014, when 37 people—among them Massimo Carminati, an alleged boss of Mafia Capitale—were charged with mafia-type association, extortion, usury, corruption, money laundering, and other crimes.

The authorities argue that Mafia Capitale is a mafia organization born and bred in Rome, linked to all the major Italian criminal organizations in the capital but ultimately autonomous, with its own mandate and reach into public administration and politics. One of the problems for anti-mafia prosecutors is that they will have to show that Mafia Capitale is indeed a mafia group, even though the group’s alleged methods—including corruption of public administrators—were apparently not the traditional ones legally required to meet the definition of a mafia.

The Supreme Court of Cassation, Italy’s highest court, confirmed in spring 2015 that the power to intimidate—the typical “mafia method” of retaining territorial influence and social prestige—can be acquired and maintained through corruption. This means any criminal structure that influences public bodies by substantially quashing any competitor or any initiative external to the interests of the group, could, indeed, be considered a mafia-type group.

Caught in the Middle

There are now 59 people facing trial, of whom 46 are the subject of this mega-trial. Alongside Carminati on the charge of leading the organization is Salvatore Buzzi. And alongside them are various local politicians and entrepreneurs, the so-called “in-betweeners” accused of supporting Mafia Capitale—and they are crucial to the state’s case.

According to the prosecutors, this trial is all about the “mondo di mezzo,” the “world in between.” And the “in-betweeners” who populate it are public officials, counselors, local politicians, mediators, and brokers who are close to figures in higher office (the “world above”), and who are seen as likely to accept promises of a better career and/or other benefits and income by exchanging favors with figures in the “world below.”

The state argues that Mafia Capitale was not only involved in various criminal activities, but also used a network of in-betweeners to influence public tenders and contracts in all sectors of public administration. To prove it legally counts as a mafia-type organization, the prosecution needs to establish whether Mafia Capitale’s entrepreneurial approach is enough to qualify the group as a mafia-type criminal association under article 416-bis of the Italian Penal Code.

This would be a major breakthrough. Under Italian law, getting a group classified a mafia group is not an easy thing to do.

Once they move outside their traditional territories, even long-established mafia groups tend to adopt hybrid methods, cooperating with other local groups and focusing more on their profits and financial activities than on the control of the territory. This conflicts with Italian law’s very specific definition of what a mafia is, which rests on the use of intimidation and the resulting conditions of submission and silence to commit criminal offences, or to manage or control economic activities and concessions.

The main challenge for Mafia Capitale’s prosecutors is therefore to distinguish the legal definition of “mafia-type” organized crime from its everyday meaning—traditional, patronage-based groups operating mostly in the south of Italy—by proving that article 416-bis does in fact apply to Massimo Carminati’s organization.

Their argument is that Mafia Capitale’s strength was its ability to accumulate and exploit social capital, and its active cooperation with individuals in different roles in society. Intimidation is not necessarily the central method of exerting influence.

By trading benefits and favors at every level of public administration in Rome, the case goes, Mafia Capitale allegedly assembled an ever-larger network of contacts that could be used to access other contacts. This snowballing approach both strengthened the reputation and reach of the organization, and allowed it to better intimidate anyone unwilling to comply. Again, it all comes down to the in-betweeners.

Wiretaps set by authorities suggested this system also pivoted around letting the in-betweeners believe they were in control of their corrupt pacts, rather than merely the executors of the alleged criminal association’s plans.

The trial of the 46 people will be heard for a total of over 130 hearings, scheduled until the end of July 2016. And if Mafia Capitale is deemed to indeed be a mafia group, the court in Rome could fundamentally change the way Italy deals with organized crime.

Anna Sergi is a lecturer in criminology at the University of Essex in the U.K. This article was previously published on TheConversation.com