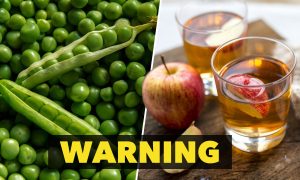 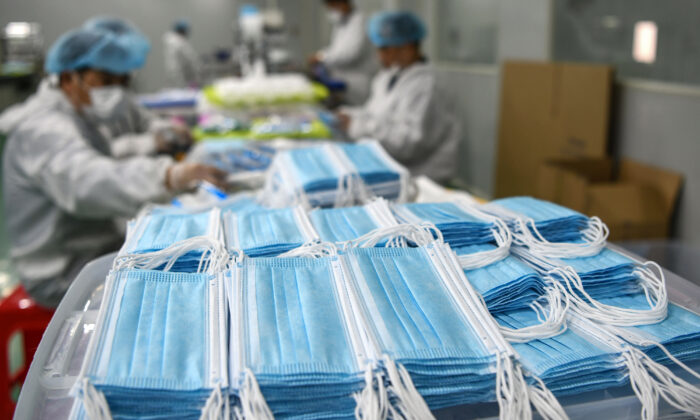 Workers are producing face masks at a factory in Nanchang, China, on April 8, 2020. (STR/AFP via Getty Images)
Thinking About China

The ‘Made in China’ Quality Crisis

Amid the COVID-19 pandemic, the regime in Beijing has used the crisis as a business opportunity to export Chinese-made personal protective equipment (PPE) and medical supplies.

However, a large number of Chinese-made COVID-19 testing kits and masks are of inferior quality, which has served to again tarnish China’s international image.

The Chinese Communist Party (CCP) has denied responsibility for spreading the coronavirus and has even accused other countries of being the source. At the same time, it has engaged in “mask diplomacy” and “anti-epidemic diplomacy.”

On Aug. 25, the Swedish Public Health Agency stated that about 3,700 people were given false-positive results because of defective test kits from China. The kits were also widely distributed to other countries.

On the same day, the Indian Council of Medical Research asked state governments to return rapid antibody test kits that were from two Chinese companies, Wondfo Biotech and Livzon Diagnostic, “as the results were not satisfactory,” according to Indian media reports.

On March 28, the Dutch Ministry of Health issued a statement that they received 1.3 million masks, marked “KN95,” from a Chinese manufacturer. However, after two tests, the ministry found that the masks “did not close over the face properly, or had defective filters,” the Dutch public television channel NOS reported.

Part of the shipment was distributed to various hospitals. Officials, who immediately recalled nearly half of the masks, said future shipments would be subjected to extra testing.

Mask quality has had an even greater effect in the United States. On April 3, due to a severe shortage of N95 masks, the Food and Drug Administration (FDA) issued a new emergency use authorization (EUA) for Non-NIOSH-Approved Disposable Filtering Facepiece Respirators (FFRs) manufactured in China. Data shows that from March 1 to May 5, China provided more than 6.6 billion masks to the United States.

For safety reasons, the FDA conducted a second review of these Chinese-made masks. Results released on May 7 found that about 60 percent of 67 different types of imported N95 masks failed to meet quality standards. On the same day, the FDA stated that it had withdrawn the permits of more than 60 Chinese firms to export N95 masks to the United States, leaving only 14 authorized companies.

In response to the international pushback, Chinese officials announced on March 31 that “test reagents, medical facial masks, medical protective suits, ventilators and infrared thermometers for export must be certified by state medical products administration departments and conform with the quality requirements of the importing country or region.”

However, these official measures don’t completely solve the “made in China” quality problem because the crisis is the result of China’s corrupt business environment. If this environment isn’t rectified, then the quality crisis could reemerge at any time. The COVID-19 pandemic was merely one catalyst.

“Beijing has engaged in “mask diplomacy”—sending medical supplies around the world in an attempt to cast themselves as a worthy partner in the fight against coronavirus and in the hope the world will forget the CCP’s failures are to blame for our global suffering,” U.S. Rep. Michael McCaul (R-Texas) said in a commentary published by The Hill.

“Of course, their subsequent propaganda conveniently failed to mention just how many of these supplies were defective or how they reportedly hoarded their stockpile while they lied about the spread of the virus within their own borders.”

According to Chinese media reports, melt-blown cloth-related enterprises in China rose by 1,250 between Feb. 1 and April 13 this year; the growth rate was more than 4,500 percent from the same period in 2019. Meanwhile, substandard product quality in these new melt-blown cloth production shops prompted local authorities to shut down all production “for rectification.”

The pandemic led to a shortage of masks worldwide. There’s speculation that toilet paper was used to keep up with the demand for masks when COVID-19 began to spread in Asia.

The present management of mask factories in China is chaotic, according to Hong Kong media outlet Ming Pao. Many dealers promoted their services through WeChat or word-of-mouth marketing and handled the certification process of medical supplies. Factory qualification certificates could easily be obtained, and some services charged 30,000 yuan (about $4,500) to get European and U.S. certifications. Sixty percent of the factories don’t have any aseptic workshops and the production areas are dirty and unhygienic.

Most of the time, mask machines are immediately put into production without being properly sanitized after they arrive in the workshop. Some workers don’t use masks or gloves.

Pengchang town in Xiantao city, in Hubei Province, is known as the capital of non-woven fabrics. The town’s non-woven fabric production accounts for 60 percent of the country’s total and a quarter of the global market share. However, local authorities closed 273 illegal small workshops in the town and seized more than 46 million substandard masks, according to Chinese media reports.

Judging from China’s current economic state and its product quality crisis, the communist regime has fostered a corrupt environment.

In fact, the CCP is aware that low quality has become a stumbling block for products made in China. It has also rolled out policies in an effort to launch a “quality revolution.” In the years 1992, 1999, and 2007, the CCP held three national “quality work” conferences. The State Council of the CCP promulgated the “Outline on Revitalizing Quality 1996-2010” and “Quality Development Outline 2011-2020.”

After Xi Jinping took office, “quality work” conferences were held in 2104, 2017, and 2019. On Sept. 5, 2017, the State Council issued the report, “Guidelines and Opinions on Carrying out Quality Improvement Actions.”

However, these documents and policies made little difference as quality standards haven’t improved over the years. In 2007, Mattel, a U.S. toy company, announced a massive recall of Chinese-made products due to excessive levels of lead paint. In the following year, Chinese milk powder maker Sanlu Group announced a recall of some of its products because they were contaminated with the poisonous chemical compound melamine.

Japan and South Korea encountered similar quality concerns during their growth years in the 1970s and 1980s. When Japanese and Korean manufacturers first made low-cost cars available to the U.S. market, the quality was considered poor before Japanese automakers made strides to improve their products.

South Korea’s Hyundai learned from the mistakes of Japanese carmakers, establishing a quality control team in 1999, and has continuously increased R&D investment. As a result, Japanese and Korean cars have gained worldwide recognition in the past few years.

The CCP Is Hopeless

It’s impossible for the CCP to make improvements similar to what Japan and South Korea accomplished in creating quality cars.

When the CCP is faced with a major crisis, it refuses to deal with the issue directly, pretending to be the victim or shifts the blame, while claiming that the other party is “demonizing China” or “being political.” The CCP looks for a scapegoat and deals with the “perpetrators.” At the same time, the regime controls public opinion and cracks down on whistleblowers and dissenters.

Under a totalitarian system, it has created a vicious cycle in dealing with crises.

In this light, it isn’t difficult to understand the fate of Zhao Lianhai, the father of a child who developed kidney stones in 2008 from drinking contaminated milk formula. Zhao is the founder of “Kidney Stone Babies,” a group that helps parents seek legal redress for their children’s illnesses due to melamine-tainted milk.

In 2010, he was sentenced to 2 1/2 years in prison for the crime of “disturbing social order,” for taking part in organizing a gathering of parents and accepted media interviews.

Because exports are limited, the Chinese people have been the biggest victims of the “made in China” quality crisis. With the international market, especially the regulated markets in Europe, the United States, and Japan, the CCP must be more careful as the quality control is much stricter than in the domestic market.

That creates a peculiar phenomenon in the domestic market, namely, that export goods sell better when they are imported back to China.

While this practice fundamentally violates the principles of modern quality management, the CCP has done this for many years. In 2007, the year when the first “made in China” quality crisis occurred, Chinese officials provided two sets of data on product qualification rates. One was that the domestic food-safety qualification rate was 85.1 percent, and the other is that over the past few years, food exported from China to more than 200 countries and regions had a qualification rate of more than 99 percent. The gap was about 15 percent.

These statistics make it clear that the CCP doesn’t care about its own people. The regime’s propaganda slogans such as “building the Party for the public, governing for the people,” leading the Chinese people to create “economic miracles,” “building a moderately prosperous society in an all-round way,” and “common prosperity” are all just nonsense.

If you still don’t know what the CCP is, take a look at how the Party handled COVID-19 when it first broke out in Wuhan in 2019. Its botched handling of the outbreak led to a pandemic, and substandard PPE products from Chin made little difference in saving lives.

Wang He holds master’s degrees in law and history and has studied the international communist movement. He was a university lecturer and an executive of a large private firm in China. Wang now lives in North America and has published commentaries on China’s current affairs and politics since 2017.