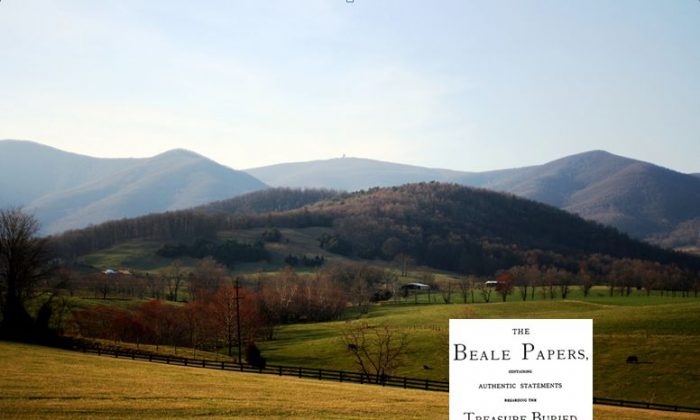 More than a century ago, a small pamphlet was published titled “The Beale Papers,” which contained three cipher texts. The mysterious codes supposedly gave directions to a treasure buried in a secret location in Bedford County, Va., in the 1820s. The cryptic texts have captured the imagination and enthusiasm of avid cryptographers and treasure hunters ever since. However, despite numerous digs and countless attempts to crack the code, two out of the three ciphers remain undeciphered, and no treasure has ever been found.

According to the story set out in the 1885 pamphlet, an American man by the name of Thomas J. Beale came across a treasure consisting of gold, silver, and jewels, in a mine located to the north of Santa Fe. Beale and 30 fellow adventurers transported the hoard to Bedford County, where they buried it in a secure location. Beale then wrote three encoded letters: one giving the exact location of the treasure, a second giving its detailed description, and a third giving the names and contact information of the 30 partners. He placed them in an iron box and gave them to a trusted friend—the local innkeeper named Robert Morriss—before disappearing, never to be seen again.

The story goes that Beale instructed Morriss not to open the box unless he, or his partners, failed to return from a journey within 10 years. When Beale had not returned 23 years later, Morriss opened the box and was stunned and excited by what he read. He immediately began trying to decode the three ciphers, but after decades of attempts, he was no closer to solving the mystery. Before he died, Morriss gave the papers to an unnamed friend, and he too, spent decades working on the decryption of the messages.

Using an edition of the United States Declaration of Independence as the key, this friend managed to successfully decipher the second of the three cipher texts, which gives a description of the buried treasure. It reads as follows:

However, unable to decipher the remaining two texts including, most importantly, the cipher containing the location of the treasure, the friend ultimately made the story and the ciphers public in “The Beale Papers” pamphlet, published by another friend, James B. Ward, in 1885.

The publication of the papers sparked a frenzied attempt to decipher the mysterious codes, and treasure hunters, impatient with attempts to unlock the remaining ciphers, grabbed their shovels and headed for the hills of Bedford County and began digging— the 2nd cipher described the location as being within 4 miles of Buford’s Tavern.

While some will never be swayed in their resolve to find the treasure, some experts consider the Beale ciphers to be an elaborate hoax. Cryptographer Jim Gillogly in his 1989 article “A Dissenting Opinion,” and forensic linguist Joe Nickell in his article in a 1982 issue of The Virginia Magazine of History and Biography, both present compelling arguments suggesting that the person who published the 1885 pamphlet—supposedly James B. Ward—was the same person who wrote the original letter with the ciphers—supposedly Thomas J. Beale. A linguistic analysis, for instance, revealed strong similarities in writing style between the original letter and the published papers, including the same use of punctuation, grammar, and vocabulary.

Joe Nickell also pointed out that the original letters, supposedly written in the 1820s, used words such as “stampede” and “improvise,” which were not in use until the 1840s, indicating that they could not have been written at the time alleged.

Attempts to track down the mysterious Thomas J. Beale from Virginia were also met with dead ends. Could it be that the Beale Papers were just an elaborate ploy carried out by James B. Ward to earn a few extra dollars? The pamphlets were sold at the price of 50 cents (roughly equivalent to $13 today), and the author was no doubt expecting a wide and enthusiastic readership.

Despite all the evidence suggesting that the whole story is nothing more than a hoax, dedicated cryptographers continue to work tirelessly on the code, and fortune seekers still comb the Bedford County countryside for the elusive and perhaps non-existent treasure, spurred on by the thrill of perhaps one day solving the centuries-old riddle of the Beale ciphers.