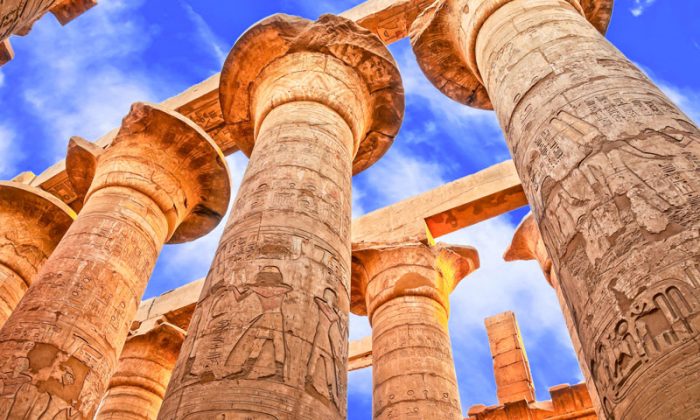 The Loss and Looting of Egyptian Antiquities

Shortly after the onset of the Egyptian revolution in January 2011, the police and many of the associated security forces abandoned their posts, creating a vacuum that has had a devastating effect on Egypt’s antiquities. With great alacrity, villagers who lived near historic sites started appropriating land, while others with more nefarious intentions, such as tomb robbers and organized mafias, began the process of plundering. This pattern continues, and though it has decreased, particularly since September 2013 when the police and the army became reengaged, it has resulted in a dramatic loss of sites and artifacts.

Land appropriation or land grabbing is fairly understandable, as villagers see what appears to be unused or underused land lying adjacent to their fields or homes while they are pressed for space due to Egypt’s ever-increasing population. Yet these areas only appear unused. They have been deliberately left by archaeologists for future generations to explore using new technologies and to test new ideas. In some instances they stand empty because of a lack of funding to carry out the painstaking, detailed work that the sites require.

Recently, villagers have increasingly extended their cemeteries, houses, and fields onto these significant sites, looting them in the process. They first dig for objects and then use the land for construction or farming. This is a tragic loss, as large chunks of unexplored or little-explored sites are being lost.

For example, the rare New Kingdom settlement site at Deir el-Ballas, north of Luxor, has almost vanished under new redbrick houses, leaving only the palace standing amidst a modern settlement. At least two kilometers of the cemetery of Tarkhan, which hosts some of the very early (c. 2850 BC) tombs of the Egyptian elite, is now covered by modern tombs, two houses, and plowed fields. Nearer to Cairo, the ancient royal necropolises at Dahshur and Lisht are disappearing under modern cemeteries once looters have taken what they can.

In the past such spaces were heavily policed so that they could not be built on or used for agricultural purposes, although this did occasionally occur prior to 2011. Now, even when a few guards are present—those employed by the Ministry of Antiquities—they are mostly unarmed. Those who do carry arms only have access to dated weapons, while the new breed of tomb robbers has sophisticated weaponry, such as automatic rifles. Looters also outnumber Ministry guards by as many as 15 to 1, making it all the more difficult to run them off. Furthermore, the guards are poorly paid (about $40 a month—not enough to support a single person, much less a family), and therefore the incentive to put their lives at risk is smaller, although several have been killed in the line of duty. Thus, with little to no police backup, it is impossible to secure sites.

For the tomb robbers, theft takes a variety of forms. Individuals may dig several holes in sites hoping to find objects that they can sell, or, more frequently, hoping to find the fabled gold of the pharaohs or the mythical “red mercury.” This substance is reputed to cure diseases, dramatically lengthen life, and give its owner dominion over other creatures. These holes are so numerous that they are clearly visible on satellite images. This unsupervised digging contributes to the destruction of sites, not only because objects are stolen, but also because the sites’ context and history are compromised.

Organized mafias pose an even greater danger. These individuals were significant antiquities traders in the past, and have now become more dominant due to the power vacuum and high demand for their products. These mafias have organized with networks that extend to Europe, North America, the Middle East, and possibly the Far East. They have access to boats leaving from unsecured ports in the Red Sea and on the Mediterranean coast, thereby allowing for easy export of their illegal merchandise. Armed gangs enter sites and methodically remove decorated parts of tombs and temples, destroying the structure and adjacent sections of monuments. They sometimes even use heavy machinery to accomplish their work, destroying entire buildings in the process. Since 2011 these mafias have employed villagers throughout Egypt to dig at sites and bring them objects to purchase, with the result that small-scale looters are encouraged. Stories spread by word of mouth of the amounts of money that the objects fetch—often greatly exaggerated—have particularly increased the number of small-scale looters.

Sites from Alexandria to Aswan have been plundered via these methods, particularly those in Middle Egypt, as they were already policed minimally due to other tensions in the area. Desert and oasis sites are also under threat, as they were previously difficult to access, but the new mafias use four-wheel drive vehicles to reach them.[1]

The reasons behind this large-scale loss of antiquities are poverty, greed, and ignorance. The dramatically escalating cost of living in Egypt, the increasing number of available and desirable commodities ranging from foodstuffs to electronics, the lack of jobs, and the poor pay, especially in the public sector, all contribute to people’s attempts to supplement their income whenever possible. Stealing antiquities also does not seem like theft to the villagers who live in close proximity to the sites; they often feel a sense of entitlement to them or say that because the objects and the land are just lying there, there is no reason not to put them to use. Additionally, for most people, particularly those who do not directly benefit economically from interaction with tourists who visit archaeological sites or from employment at these sites, there is little or no sense of engagement with the antiquities. Thus the sites’ sole value lies in the sale of their objects or the appropriation of the land on which they stand.

Lack of education is also to blame for the continued looting. Although some school classes cover Egypt’s ancient history, there is limited emphasis on its importance or value, and students receive little exposure to the sites and objects. Thus, the very people who might be the future chief stakeholders of Egypt’s antiquities are those who are the least engaged with them.

The full return of the security forces would go a long way toward controlling the problem of looting and land-grabbing, and such security must be provided by the government. Currently the military would have to be involved, as the police have lost their credibility and their weapons are less sophisticated than those of the looters. Laws that have been in place to protect antiquities since the nineteenth century and the laws that bar exporting rare objects[2] also need to be enforced visibly and publicly. Another possible solution is to educate customs officials and increase the policing of dealers and auctions to curb the illegal sale of antiquities.

Long-term, a proper program in schools that emphasizes the importance of Egypt’s ancient history must be implemented if change is to take place, in tandem with economic growth. In the interim, Egyptian and international scholars need to work together to document and secure objects kept in storage and at sites and (sadly) erect walls around archaeological areas.

[1] Many fakes are also being marketed, with the oases providing a false provenance for dealers and collectors.
[2] Salima Ikram, “Collecting and Repatriating Egypt’s Past: Toward a New Nationalism,” Helaine Silver, ed., Contested Cultural Heritage: Religion, Nationalism, Erasure, and Exclusion in a Global World (New York: Springer, 2011), 141-154.
____________________

Salima Ikram is Professor of Egyptology at the American University in Cairo, and has also worked as an archaeologist in Turkey, Sudan, Greece, and the United States. This article was originally published at the Middle East Institute.

*Image of “Karnak Temple” via Shutterstock