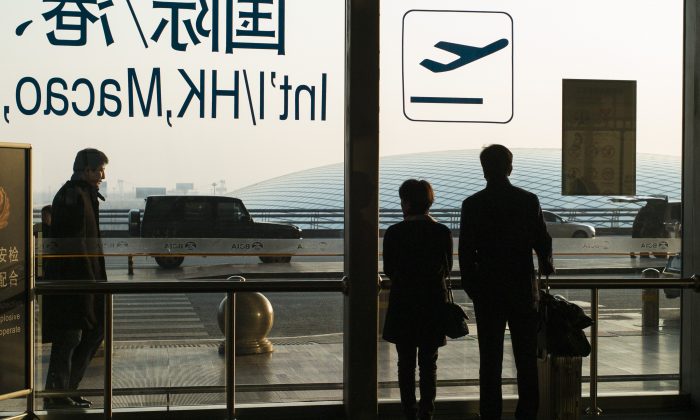 The Long and Costly Path of Illegal Chinese Immigration

Having left her native China and entered the United States via a smuggling ring in 2014, Zheng Lili recalls the climax of her months-long journey, which took her around the world and cost tens of thousands of dollars.

“I was scared to death, gasping for breath, I thought I would die there.” It was at that very moment, after she crossed the Rio Grande, that she heard police officers say, “Welcome to America!”

Her first stop was Moscow. From there she went to Cuba, where a visa is not required for Chinese nationals staying less than a month, before finally arriving in Mexico City and embarking on their trek journey north.

At Mexican customs, the leader of the group Zheng was in had told everyone to slip $200 into his or her passport. They were then led to a special entryway and got through without trouble. Joined by a dozen others from different countries, they set off at midnight on a journey to the Rio Grande Valley. For two days straight, they marched over the mosquito-infested land, constantly ready to throw themselves to the ground to evade helicopters or patrol vehicles.

Zheng had become so exhausted that she had to be carried by her son and another immigrant. “We all looked forward to being arrested after crossing, because it speeds up the process,” she told The Epoch Times.

Her son was released on bail a month later, and was soon granted political asylum on account of the Christian faith he learned from his devout grandmother. Zheng was detained for two years.

Along with seven Mexicans, the group was discovered while they were going through a cross-country tunnel from Mexico. All came from southeastern China—22 from the coastal province of Fujian and one from the neighboring province of Guangdong.

Zheng, also from Fujian, arrived in the United States in 2014 and spent two years in detention before she was reunited with her husband in 2016. Her husband, Chen Zhiqiang, was himself an illegal immigrant: he had gained entry over two decades earlier with a fake passport obtained in the Netherlands. Chen and Zheng were the last of 39 Chen-surnamed families in their town that left home for the United States.

Fujian has historically been one of the largest sources for Chinese immigrants. Changle District, which in the late 1970s became one of the first Chinese ports opened up for international trade, gained the nickname “Village of Smugglers.” From 1980 to 2005, over 200,000 people had been trafficked to overseas destinations, according to Sina, an online Chinese media group.

In Fuzhou, capital of Fujian, tens of thousands of “left-behind children” lived with their grandparents, according to Beijing News. The parents—unauthorized immigrants working in the United States—sent their toddlers back because they had no extra energy or time to take care of them after toiling for 13 hours a day or more. Changle District, which lies near Fuzhou and has around 712,500 residents, counted 5,000 U.S.-born children in 2012. Nearly every local household had someone living overseas.

Fujian has a long tradition of emigration, beginning in antiquity as Chinese merchants left the mainland and settled abroad, often in Southeast Asia. In the early 1960s, Fujianese sailors who took work in Hong Kong discovered that they could earn 15 times as much in the United States, sparking a first wave of emigration to the West.

Gradually an extensive network and an industry of smuggling developed. “When other people got out and we didn’t, it made us look bad,” unnamed immigrants told Sohu, another Chinese media site. Villagers in Changle would set off fireworks to celebrate whenever someone made it to the United States.

“There have been lots of historical cases of Chinese people being brought into the United States illegally on ships, in railroad coaches, hidden in cars, through tunnels, on airplanes – every imaginable way that humans can think of to cross the border,” Elliot Young, a history professor at Portland, Oregon’s Lewis and Clark College and author of the book “Alien Nation,” which documents China’s immigration history to the United States, told Voice of America.

“The Chinese were among the first to invent these ways of evading border control,” Elliott Young said.

Zheng Qi (not related to Zheng Lili), chairman of the Fukien Benevolent Association of America, made his way into America with a Thailand tourist passport, according to U.S.-China Press. In his unsuccessful first attempt, the Hong Kong-based travel agency got him a travel visa to Canada, which got him to the Canadian border before he was discovered and repatriated.

The Migration Policy Institute estimates about 268,000 illegal or undocumented immigrants from China, making them the fifth largest group among over 11 million illegal immigrants residing in the United States, and the largest of all non-Latin American nations. In a 2016 report, the MPI identified China as one of the world’s leading sources of immigrants.

Over a period of seven months from October 2016 to this May, the California border patrol apprehended 663 Chinese trying to illegally enter the United States, a huge jump from a mere 48 over the same period in 2016, and just 5 the year before, NBC 7 reported.

Smugglers see Chinese clients as more profitable than those from Latin America or Mexico, since gangs can demand higher fees due to the longer travel route. In the past few decades, the cost of smuggling an immigrant has more than doubled, rising from $30,000 to $50,000 to $70,000, according to the Council on Foreign Relations.

Rarely are these fees paid upfront to smugglers, called shetou or “snakeheads” in Chinese, according to the professor Elliott Young.

Young observed that the immigrants would usually arrange with the smuggler on a certain amount of down payment—around a few thousand dollars—and “work off their debt in the United States by working in a business.” “They work in restaurants, garment factories and other, often Chinese-owned, businesses,” he said.

A sarcastic Chinese expression describes a typical illegal immigrant’s day-to-day life upon arriving in the United States: “Daytime at the stove, nighttime on the pillow, and weekend at the lawyer’s.”