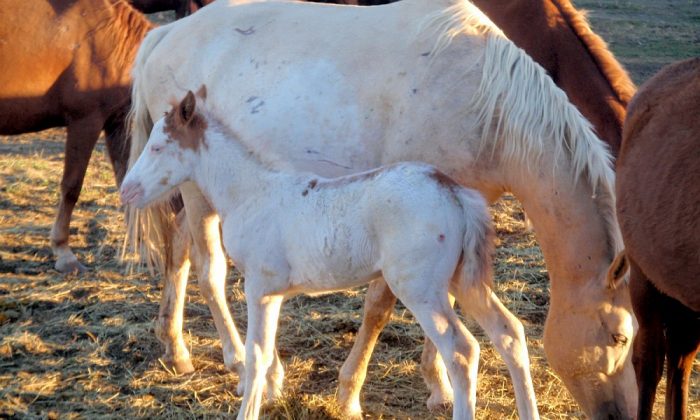 Medicine Hat colt with his mother. Only one in 700 horses born are medicine hats. This picture was taken before the blizzard (Myriam Moran Copyright 2013)
News

The baby horse stuck its hoof up in the air as if to say ‘I am not going to step in that mud.’ The little filly was born to a mare in the Catnip herd in Lantry, South Dakota. Its mother was attentive; an aunt gathered near when movement of other horses threatened the baby. Perfect in every way, the little horse had a white body, autumn haze brown shield over her left eye, dainty yet perfectly formed white legs with little pearl colored hooves. A shield formed part of her chest.

“Not one in 700 births is a medicine hat. Indian warriors believed that to ride such a horse in combat made them invulnerable to injury or death,” Karen Sussman said. We sat in a mud-spattered four-wheel drive truck looking at the little horse and its mother from a deeply rutted road. The storm passed and we were left with the gruesome task of picking up dead horses.

Large numbers of domestic cattle also tragically died. The same storm ended neighboring ranchers’ hopes to do better than break even this year. To finally turn a profit so they could make home and equipment mortgage payments next month when their cattle were shipped. This was not an aged dying where death is sad but expected. Not the occasional death from winter snows. This record storm killed thousands of animals.

An October blizzard swept down over western South Dakota. Nothing like it ever happened before. Not this early. “Look at the trees. The leaves are still green. It was 86 degrees two weeks ago. It was so hot I thought about putting the air conditioner on in the house. I said no, I’m not going to put an air conditioner on in late September,” this grandmother of 5 said. Karen is president of the International Society for the Protection of Mustangs and Burros (ISPMB).

The equine conservancy was started in 1960 by friends of Velma Johnston to support her work. Velma was more popularly known as Wild Horse Annie. The moniker started as a derisive term coined by enemies of her struggle to save wild and free roaming horses and burros. It was Wild Horse Annie’s mustering children from around the U.S. and around the world that caused Congress to pass protective legislation affording wild horses a modicum of protection from abject slaughter and cruel roundups by aircraft with gunners shooting into terrorized herds.

Karen now holds the reins to ISPMB. The non-profit organization maintains four distinct herds and many special care horses on a ranch in Lantry, SD. It’s a hard place to find. So far off the beaten tourist path that few are willing to make the 2 ½ hour drive from Rapid City to visit. The organization is totally subsistent on private donations. Its budget was pushed to the limit when last year’s western drought saw corn and sunflower crops reduced to 25% of normal yields and hay crops fail.

“In January 2012, I was paying $65 per ton for hay. By February it went to $90 a ton. I thought then, ‘How dare you ask that high a price.’ The hay farmers saw the drought coming. By March hay was still $90 a ton but the locals decided not to sell any more. I was on the phone every day trying to find hay. I bought hay for $100 a bale. It amounted to $175 a ton. By June and July I was able to buy hay in Timber Lake for $100 a bale. By August I had to buy hay from Canada for $100 a ton, Shipping was $3,000 a truckload. A truck can haul about 30 bales that weigh around 1,200 pounds each. I got all the hay from Canada until June 2013. My first six truckloads cost me the price of the hay plus $3,100 each truck for shipping. It was $210 to $220 a ton,” Karen said. The freight was exorbitant since there were no back hauls where truckers could make money on the return trip carrying freight.

“I’m worn out. I can’t do that again.” This sturdy pioneer spirit declared, exhausted. It was said in momentary desperation. We were sitting in the truck, after the blizzard passed, checking on the little medicine hat foal and her mother. “That other little baby with his mother looks good. I was worried about it as well.” There was nothing else to be said or done except drive into a deeply rutted, muddy lane to where the tractor was parked.

Jules Uses Many nearly lost his knee length rubber boot in mud as he tried to pull a foal’s body into the tractor’s loader. Two days after the blizzard began warm weather was melting the snow. The melt caused floods in the pastures. Deep mud was everywhere. Jules, a Cheyenne River Sioux tribal member, never saw anything like this before either.

“It’s like the massacre at Wounded Knee,” he said. He spit smokeless tobacco. Its sharp taste seemed to help him through the difficult day. Traditional tribal members consider wild horses sacred. They are part of their culture. Horses changed a way of life from dog people to a horse culture. These last four herds, including the rare Gila herd of Spanish mustangs, kept in family bands on the ranch in Lantry, are the few that have not been rounded up every year.

Government agencies conduct roundups of wild horses on public lands. The terrorized horses are then pushed into holding pens, sorted and separated from their families by government officials. The objective of these bureaucrats is to rid wild horses from public lands.

The loss of one ISPMB mustang is tragic. Each death takes with it the history and tradition of the first peoples of this land as well as the cowboy tradition born when vaqueros of old Mexico tamed Spanish mustangs.

The loss figures were staggering. Each tractor load took three to four foals and yearlings to the place where they were to be buried. The road to the south range was now deeply rutted. The track was so muddy it was all Jules and Karen could do to keep the tractor on the path and make it up a steep hill.

The cargo was grim. In the 14 years Karen has been conducting research on these wild herds nothing like this ever happened before. Karen’s observations reveal that, unmolested, wild horses in family groups and bands, with their band stallions, hold breeding in check. When left to nature wild horses do not over-reproduce as U.S, Bureau of Land Management (BLM) bureaucrats have been telling the U.S. Congress. Rounded up and sorted horses with only certain types and ages released again into the wild behave differently than natural wild horse herds. The BLM conducts routine roundups, part of a program to eliminate wild horses on public lands in favor of cattle leases, hunting interests as well as oil and gas exploitation.

None of this seemed very urgent at the moment. There was no hay. Karen was on her cell phone getting promises of delivery. The current price plus shipping was still very high. While summer 2013 saw plentiful harvest because of ample rainfall, ranchers were stockpiling hay as reserves for their cattle in case 2014 proved to be another drought year.

“How are my babies doing?” Karen asked Jules. She inquired about foals and horses we were able to rescue and bring into sheds. During the freezing cold their legs were massaged. Blankets were placed around them. As they recovered we tried to get them on their feet. A few of the rescued died despite brave efforts to keep them alive during the freezing nights of the blizzard. The ones that made it were doing well, a saving grace.

It was warm again. Hot almost. I took off my stocking hat, shed my coat then got rid of pants and sweater. They say you have to dress in layers in South Dakota with good reason. I finally changed back into my T-shirt and shorts. Funny looking dude in that outfit with high rubber boots. The deep muck was everywhere. Snow was melting fast. Lower pastures were already under three feet of water.

“My little medicine hat is dead…” Karen told us the next morning, “…and the tractor broke down.” While the burdens and reality of the previous two days had not yet set in, as clean up work and continual care for the herds and babies had to be done, this new tragedy struck. The beautiful little baby medicine hat succumbed.

Harsh circumstances make good neighbors. South Dakotans are resilient people. Despite their own travail having to pick up dead cattle that littered their own pastures, a neighbor came with his tractor so hay could be unloaded and the herds fed.

“I need to raise $175,000 just to buy hay to get us through the winter,” Karen said. She never repeated the lament of defeat. A lot of wild mustangs depend on her.