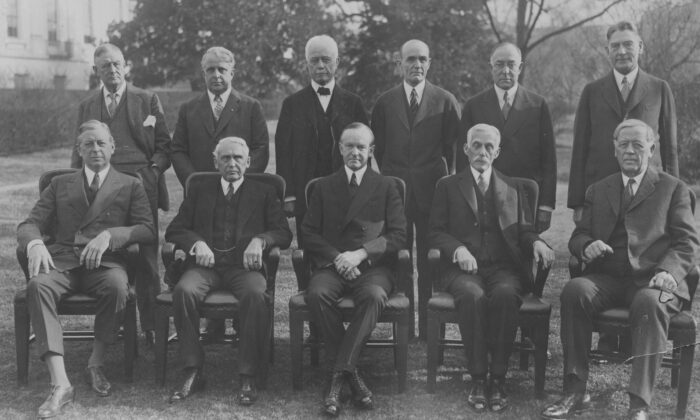 The Little-Known Treasury Secretary Whose Ideas Are Still Debated

The arguments about this often-forgotten U.S. Treasury Secretary continue a century later.

The policies and writings of 1920s U.S. Treasury Secretary Andrew Mellon touch on much of what Americans debate today: Taxes, economic growth, and inflation.

Keep tax rates as low as possible, he advised. Low taxes benefit those with modest as well as high incomes. They produce strong growth, Mellon wrote. He was the American father of supply-side philosophy, says economist Arthur Laffer. Supply-siders believe high taxes hurt everyone, especially the poor; that tax rates are dynamic and have a dramatic effect on all of society. High taxes don’t produce the desired result: a booming economy with lots of money pouring into government coffers.

“The history of taxation shows that taxes which are inherently excessive are not paid,” Mellon wrote. “The high rates inevitably put pressure upon the taxpayer to withdraw his capital from productive business and invest it in tax exempt securities.”

These views were in his 1924 book, “Taxation: The People’s Business.” Mellon was a Pittsburgh banker and a Republican party leader in the early 20th century.

Mellon wrote tax rates should be set on “a non-partisan basis.” He condemned class prejudice in tax policy. Taxation, he wrote must lessen the burden on those least able to pay.

A bad tax system, Mellon wrote, “denies the worker “the right to receive a reasonable share of his earnings.” When that happens, the worker “will no longer exert himself and the country will be deprived of the energy on which its continued greatness depends.”

Mellon’s national celebrity began when he became Treasury Secretary in the Harding administration in 1921. He applied these low tax/leave the economy alone ideas in the depression just after World War I, the depression of 1921-22. It is little known because it was over in just 18 months.

“It was the crash that cured itself,” wrote monetary historian James Grant. It was also the last depression in which the government allowed the economy to naturally recover, according to economist Murray Rothbard in the book “America’s Great Depression.”

Mellon called for an income tax that was “a rich man’s tax.” And the income tax could only carry the federal revenue load as a rich man’s tax if the rates were low,” according to Mellon. Low rates, Laffer says, worked well.

The Roaring Twenties were the decade of Mellon’s boom.

Still, the administrations that came after Mellon’s stewardship, the last part of the Herbert Hoover administration and the years of Franklin D. Roosevelt, rejected him. Before that, his ideas dominated tax policy.

Mellon became a national hero when he obtained a lowering of income taxes, which were 73 percent in 1921 when he became Treasury Secretary. This was also a time when the consumer price level had gone up some 70 percent over the 1913 level.

Mellon repeatedly cut taxes—A similar policy also followed just after World War II by West German Finance Minister Ludwig Erhard, who slashed rates by “over half” for all taxpayers, then called for “even greater reductions,” according to “Ludwig Erhard” by Alfred C. Mierzejewski. Erhard created what was later called “The German economic miracle.” It quickly recovered from the disaster of World War II while the United Kingdom, which under a Labour government after World War II barely cut taxes, lagged.

Mellon’s tax cuts that began in 1922, dramatically lowered rates, explains historian Brian Domitrovic of the Laffer Center in Nashville, Tennessee. He is the co-author of a book with Lawrence Kudlow on how Mellon’s ideas were adapted 40 years later by the administration of President John Kennedy, “JFK and the Reagan Revolution: A Secret History of American Prosperity.”

Mellon’s policies created a boom in the 1920s, Domitrovic said in an interview with The Epoch Times.

These tax cuts, Domitrovic noted, “lowered rates and upped tax liability thresholds. The boom was sustained as Mellon kept at it with tax cuts, taking the top rate down to 25 percent and again the thresholds way up.”

In the same period, the national debt declined by about a third, he added.

But in the crash of 1929—a crash caused and extended by faulty Federal Reserve policies, according to economist Milton Freidman—Mellon again argued for the same policies as in 1921: tax cuts; no bailouts.

They were rejected by president Herbert Hoover as he had rejected them in the early 1920s when he was Commerce Secretary in the Harding administration. Then he was overruled.

This time the federal government’s depression policy was different. Instead of cutting taxes, Hoover raised them and, for the first time as a long term policy, Hoover had the federal government intervene to turn the business cycle. This included everything from subsidizing some businesses to persuading business leaders not to let wages decline, or adjust to market changes. These were all signal changes from the Harding-Coolidge policies in the depression at the beginning of the 1920s.

The previous policy of allowing the market to weed out failing businesses, or malinvestments, was detailed in economist Joseph Schumpeter’s book “Business Cycles.” Schumpeter had argued that without the cleansing process a recovery would be hindered during the Hoover and FDR administrations. (This philosophy was replaced by a new model.)

Instead of letting the economy naturally recover, governments would use countercyclical spending measures. The model was used by Hoover and FDR and endorsed by economist John Maynard Keynes.

These Keynesian policies are now accepted by almost all American and modern welfare state leaders.

Obviously, FDR followed these policies on a much grander scale than Hoover. Still, economist Murray Rothbard wrote in “America’s Great Depression” that Hoover was “the true father of the New Deal.” An FDR New Deal adviser agreed.

“I once made a list of New Deal ventures begun during Hoover’s years as Secretary of Commerce and then as president,” wrote Roosevelt economist and Brain Trust adviser Rexford Tugwell. “I had to conclude that his policies were substantially correct. The New Deal owed much to what he (Hoover) had begun.”

The Mellon ideas of repeating the successes of the 1920s—cutting taxes and letting the economy naturally recover—were disparaged by Hoover and FDR. But their big spending policies of propping up failing businesses, as contained in the Hoover-created Reconstruction Finance Corporation, never restored prosperity.

These were the opposite of Mellon’s approach. Mellon’s included restricting government spending to the minimum needed with the aim of keeping inflation low.

How did people react to the policies of the most well-known Treasury official of the 1920s?

Mellon was alternately called “the greatest Treasury Secretary since Alexander Hamilton” and later the worst one. In the FDR administration, which reversed Mellon’s policies, he was twice indicted and twice exonerated for tax evasion.

But even hostile Mellon biographers, those disagreeing with his supply-side ideas, agree Mellon was scrupulously honest. For example, David Cannadine, in his “Mellon: An American Life,” says had he lived in that era he would have opposed Mellon’s supply-side ideas. But he contends Mellon was honest and didn’t take all tax deductions.

Some, such as Laffer, a Mellon admirer, brand these prosecutions “political” because people blamed him for the Great Depression. Hoover seemed to blame him too. He sacked him as Treasury Secretary and exiled him to the United Kingdom as ambassador.

Mellon, in the 1930s and today, remains a controversial figure. Mellon was called greedy yet, even as he was prosecuted, he contributed much of his picture collection to the National Gallery.

Mellon’s ideas are followed by some today, even those who have never read him. It is a philosophy partly embraced by President Donald Trump. Mellon’s philosophy was also endorsed by Presidents John Kennedy and Ronald Reagan, even if his name rarely came up.

The supply-side policy was happily accepted by Reagan. This came after Laffer drew the curve on the cocktail napkin for then-private citizen Reagan, showing how low taxes benefited the nation—the essence of Mellon’s ideas. The concept was accepted by the former, who initially had no intent of applying tax cuts when he entered the White House in 1961.

Kennedy, in the midst of a recession in the early 1960s, changed and decided to cut marginal tax rates just as Mellon advocated in the Depression of 1921.

Kennedy was following a supply-side formula and cutting marginal rates for the first time in over a decade. The rates had been irrationally high. In the 1940s and 1950s, some of the highest tax rates were 90 percent or more. Why, Mellon’s scions asked, would anyone earn an additional dollar if they were only able to keep a dime or less?

Kennedy’s cuts embarrassed some of his relatives in the 1980s. They were uncomfortable when Reagan kept citing Kennedy’s words in his efforts to cut taxes.

Indeed, Kennedy, in changing his mind for lower taxes, said “a rising tide lifts all boats.”

Strong growth rates followed both in the 1960s and 20 years later, when the same policy was repeated, as well as when Trump, in part at the advice of Laffer, followed the Mellon course.

Yet in his day and age, Mellon’s philosophy is branded by mainstream media as an apology for the rich. Today President Joe Biden dismisses supply-side ideas as “trickle down.” This is characterized by much of mainstream media as a failed policy only designed to help the rich at the expense of the rest of us.

The biggest beneficiary of these small government policies—policies that keep both taxes and inflation rates low—are those with modest incomes, Mellon wrote.

Inflation, now running at an annual seven percent rate, a 40-year high, is embedded in many of the goods and services those with modest incomes buy each day. When inflation is running high, these people feel its effects more than the well-off, who are better equipped to pay high prices.

The goal of tax policy is to “bring in the maximum amount of revenue to the Treasury and at the same time bear not too heavily on the taxpayer or on business enterprises,” Mellon writes. Bad tax policy, he argues, ultimately hurts both the rich and the poor because it slows the economy.

These debates over taxation remain important even if we have never heard of the people who triggered them.

Indeed, it was Keynes who wrote that “practical men who believe themselves to be quite exempt from any intellectual influence, are usually the slaves of some defunct economist.”

The debate over taxation will go on even if Mellon’s name is never mentioned because his ideas are perpetually relevant.

Excessive taxation, Mellon warned, could “retard the continued steady development of business and industry, in which, in the last analysis, so much of our prosperity depends.”