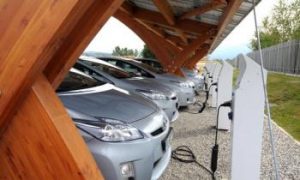 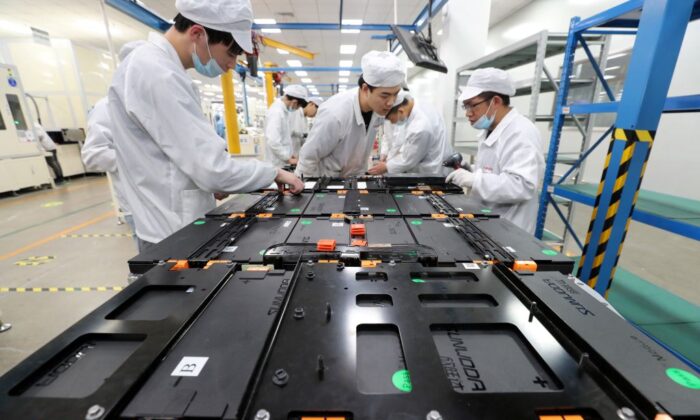 Workers at a factory for Xinwangda Electric Vehicle Battery Co. Ltd, which makes lithium batteries for electric cars and other uses, in Nanjing, Jiangsu Province, China, on March 12, 2021. (STR/AFP via Getty Images)
Thinking About China

The Lithium Wars: China Is Outmaneuvering the US

The Chinese Communist Party (CCP) and the Taliban, Afghanistan’s new rulers, have formed increasingly strong bonds. The CCP has its eyes on Afghanistan’s mineral deposits, which are worth somewhere around $1 trillion. The United States occupied Afghanistan for 20 years, yet failed to capitalize on the most lucrative of opportunities.

Home to an array of metallic minerals, including iron, copper, lead, zinc, cobalt, nickel, tin, gold, and uranium, Afghanistan has one of the largest deposits of lithium in the world. There’s a reason why the scientists who helped develop lithium batteries won the 2019 Nobel Prize in chemistry. From laptops to cellular phones, our lives would grind to an excruciating halt without lithium batteries.

As climate activists gain more of a stranglehold over governments, all in the hope of eliminating fossil fuels, the demand for lithium—more specifically, lithium-ion batteries—will certainly result in further geopolitical storms. With more people embracing the idea of solar, lithium-ion batteries have increased in importance. Its prismatic form allows for superior ventilation in homes, we’re told.

According to Elon Musk, the CEO of Tesla, the world’s most prominent electric vehicle (EV) player, China is set to become the company’s “biggest market.” That isn’t surprising. After all, by 2035, all new cars sold in China will be either hybrids or new-energy vehicles. According to BloombergNEF analysts, it’s not just cars that are being transformed. Buses, trucks, and scooters are also changing in nature. In less than a decade, the global market for EV batteries is expected to be worth $1 trillion. In order to facilitate that growth, lithium-ion batteries—a lot of them—are required.

Lithium is “the new oil,” according to Lukasz Bednarski, who authored the book “Lithium: The Global Race for Battery Dominance and the New Energy Revolution.” Like oil, it comes with a whole host of geopolitical complications. Considering that the under-appreciated mineral is set to revolutionize our jobs and the way we travel, the lithium wars of tomorrow pose existential questions.

Bednarski, a battery materials analyst and founder of the lithium industry portal Lithium, discussed the salt lakes of the Tibetan plateau, which are rich in lithium. At the time of writing, the CCP is busy building 30 airports in Tibet. Not surprisingly, Chinese companies are also busy extracting lithium.

Bednarski also discussed Argentina and Chile, two countries in which the CCP appears to have a vested interest. Again, both countries are rich in lithium reserves, a fact that isn’t lost on those in Beijing. However, of all the countries in South America, Bolivia is the jewel in the lithium-soaked crown. With more than 21 million tons, the country is home to the Salar de Uyuni salt flat, the world’s single-largest lithium deposit. The reserve, which is visible from space, is the most important in South America.

Not surprisingly, Chinese leader Xi Jinping has done everything in his power to foster cooperation with the Bolivian government.

“The history of the oil industry has been centered on the Western world and the Middle East, with the United States of America playing a leading role.” Bednarski wrote. “The lithium industry centers on Asia and Latin America, with a leading role for China.”

What about the lithium reserves in Africa, a continent that China, through its Belt and Road initiative, essentially controls? In Zimbabwe, the Bikita mine has almost 11 million tons of lithium ore. More worryingly, the CCP basically runs the country. In 2020, when local employees at a mine demanded that their Chinese employer pay better wages, they were shot. Wherever vast lithium reserves exist, one is sure to find Chinese influence. Again, that’s bad news for the United States.

However, all isn’t lost. Australia, one of China’s fiercest foes, happens to be the world’s largest producer and exporter of lithium. As relations between Canberra and Beijing become even colder, there’s an opportunity for the Biden administration to act. This isn’t a call to exploit the Australians, of course—not that the Aussies would allow such a thing to happen. No, this is a call for a mutually beneficial partnership. The two countries, already on good terms, must unite to thwart the rise of China. Action, though, must be taken soon. Lithium, arguably the most important mineral on the planet, is being monopolized by the CCP.