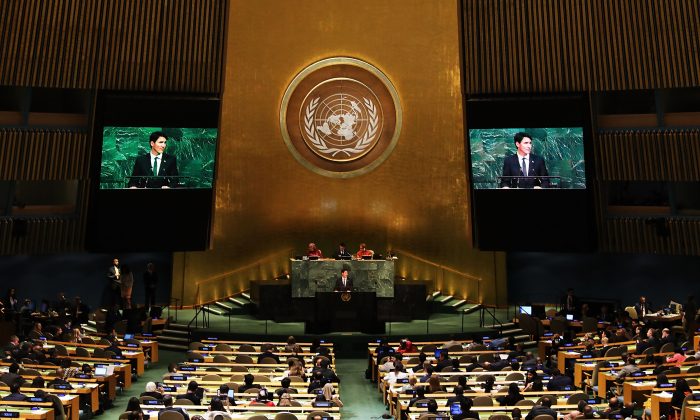 The Link Between Declining National Education Quality and UN Agenda 2030

Experts have noticed a decline in the quality of education and student test scores in the United States and worldwide.

Could it be that the quality of teachers has dropped? Teaching roles are more disciplinarian and are focused on indoctrinating students into the latest education fads. Could it be that College of Education graduates are often not very strong in the arts and sciences, as evidenced by National Teacher Exam results, but are nonetheless licensed to teach?

What is responsible for the trend worldwide? One need not look any further than U.N. Agenda 21 and its offspring, U.N. Agenda 2030. Among the 17 Sustainable Development Goals (SDGs), the lynchpin of U.N. Agenda 21 promoted by globalists, is SDG 4, “ensure inclusive and equitable quality education and promote lifelong learning opportunities for all.” Nobody can object to lifelong learning and education opportunities for all. But what exactly is “inclusive and equitable quality education?”

Americans are quite culturally diverse but are not interested in global citizenship and U.N.-designed sustainable development.

The Pearson curriculum, with its Common Core textbooks, that have been widely adopted in the United States, is focused on global citizenship, indoctrination into Islam and collectivism, and any type of literature opposite to the classics. The new Common Core math is dumbing down achievement and students’ ability to compete in a STEM setting.

Alex Newman described the U.N. Agenda 2030 with its 17 sustainable development goals as a recipe for “global socialism and corporatism/fascism” foisted upon the world by the United Nations.

Nongovernmental organizations sponsored by a certain billionaire helped write the curricula and the textbooks for public schools after the fall of communism in 1989 in Eastern Europe.

According to the 2016 Global Education Monitoring Report, “teachers need to be trained to teach sustainable development and global citizenship.” Children must be taught early to be good environmental stewards and adults must be nudged in the same direction.

Maryland State Board of Education announced in June 2011 that students must be environmentally literate before they can graduate from high school. It did not matter that their math, science, and reading scores were terrible as long as they were prepared for a green economy and green jobs that never materialized.

The No Child Left Inside Act emphasized “green play” as it helped children cope with ADD and obesity rates. Does anyone know what “green play” is?

Former Maryland Gov. Martin O’Malley proudly repeated the Mother Earth stewardship mantra that “only through exposure to nature and education about our fragile ecosystem can we create the next generation of stewards.”

The founder of IB, Therese Maurette, said, “It is important psychologically to be willing to subordinate one’s national superiority by speaking to the other person, however imperfectly, in their mother tongue.” The concept of “nationality” must be minimized in order to encourage students to develop a picture of the whole world. “History should not be taught until well into adolescence because, for the younger student, it inevitably consists of a series of stories and myths glorifying violence and misrepresenting events by giving them a nationalistic bias.”

Schools that adopt the expensive IB program must also adopt international moral and ethical values. They are the diverse values of different cultures as contained in the Universal Declaration of Human Rights adopted by the U.N. in 1948. They are not American values; they are values that encourage social change in which “the rights of the individual are linked to those of the collective,” through social justice, environmental protection, and sustainable development.

The May 2008 article “IB is Showing the Way,” published by IB World, stated: “Young people need to feel first of all global citizens, second national citizens and third local citizens. Among my generation, it is the other way around. Change will be difficult, but schools are already thinking about curriculum changes.”

Justin Blough described the IB program he attended as thus: no learning about U.S. presidents or good values, no American history, patriotic songs, and plays. Teachers had to wear the light blue colors of the United Nations and to be preoccupied with “moral, ethical, social, economic, and environmental implications of global production and consumption.”

The IB program promotes the Rescue Mission Planet Earth as the student’s version of the U.N. Agenda 21. The first director of UNESCO, Julian Huxley, said that “UNESCO is to help the emergence of a single world culture, with its own philosophy and background of ideas, and with its own broad purposes.”

I can now see why multiculturalism, diversity, ethnic studies, and intercultural proficiency/competency to promote social justice have sprung up all over the world at the same time and why collectivist phrases such as service ethic, planetary service, world citizenship, and global servant are now found in many languages.

And Western history is sent to the permanent dustbin of civilization as colonialist and evil, while architectural ruins are used as dumpsters and some museum artifacts are covered in dust and grime.