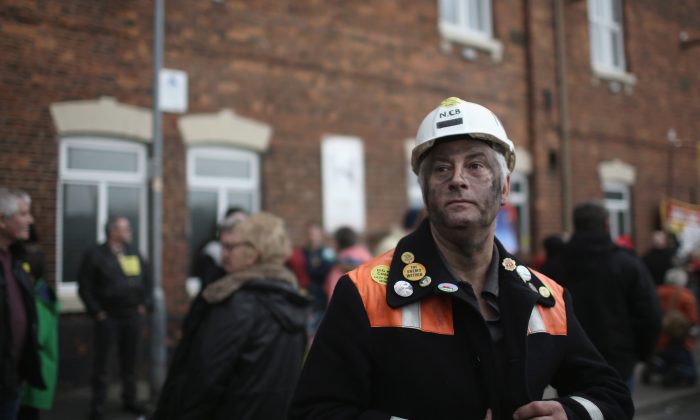 Miners, union members, and the local community take part in a protest march from Knottingley Town Hall to the Miners Welfare Center marking the end of deep coal mining in Britain, in Knottingley, England, on Dec. 19, 2015. Kellingley Colliery closed Dec. 18. The last deep mine in Britain began production in 1965. Its closure will complete a carefully managed two-year plan for the U.K.s deep mines. This has been implemented by U.K. Coal with financial support from the British government. It follows a long period of difficult trading conditions largely due to low international coal prices. (Christopher Furlong/Getty Images)
Opinion

The reign of King Coal is a story that is central to fully understanding modern Britain. Coal powered the industrial revolution, employed over a million miners at the industry’s height, shaped and sustained communities across the country, and has played a key role in the U.K.’s political economy.

With the closure of Kellingley colliery, the country’s last deep mine, in December 2015, a defining chapter in British history comes to an end.

Although coal had been mined in small quantities in Britain since Roman times, the story of coal as a major industry begins with the industrial revolution. From the 18th century onward, demand for coal began to grow at an increasing rate. Several factors drove this, but its most important uses were as a fuel for steam-powered engines, in ironworks and metal smelting, and for domestic energy consumption in growing cities and towns.

In the 19th century, coal grew to become the biggest industry in Britain in terms of workforce. The early years of the 20th century proved to be the industry’s zenith, however.

The early years of the 20th century proved to be the industry’s zenith, however. The period between World War I and II was one of crisis and catastrophic decline for coal. Its seemingly unassailable position was undermined by a series of economic factors—including the decision in 1925 by the Chancellor of the Exchequer, Winston Churchill, to return sterling to the gold standard. This had the inadvertent effect of making British coal too expensive in its important, but increasingly vulnerable, overseas markets.

As labor was the biggest cost in coal production. Employers’ attempts to cut wages led to a series of bitter industrial-relations disputes in the 1920s. The most well-known is the 1926 general strike, called by the Trades Union Congress in support of the miners. Although the general strike itself only lasted nine days, communities around the country’s coalfields held out for a further six months before finally conceding defeat.

Following the dark days of the 1920s and 1930s, the nationalization of the coal industry in 1947 by the Labor government led by Clement Attlee seemed to many miners to represent the dawn of a new era—the attainment of a long-held aspiration. And, while it did lead to improvements within the industry, it was not the golden age that many hoped for—as the 1960s were to prove.

The 1960s saw the first significant post-war program of colliery closures, prompted by the increasing use of alternative energy sources—oil, gas, and nuclear power. These closures disproportionately impacted the smaller and more geographically peripheral coalfields. Declining real wage levels and bitterness toward these closures led to strike action in 1972 and 1974.

The 1972 strike crippled the U.K.’s power supplies, forced a three-day week and a state of emergency. And, in response to the 1974 strike, Conservative Prime Minister Edward Heath called a snap election, which he subsequently lost to Labor. Both strikes were successful for the miners, leading to pay increases that put them among the highest paid of the working classes.

But, despite these victories, the strikes convinced senior figures within the Conservative Party—including newly elected leader Margaret Thatcher—of the need to decisively confront and defeat the miners’ union, as the essential precursor to the denationalisation of the industry. Thatcher’s election in 1979 and re-election with an increased majority in 1983, made a major confrontation with the coal industry inevitable.

In March 1984, in response to the announcement of a further round of colliery closures, miners went on strike to defend their jobs. The majority stayed out for an entire year, enduring significant financial and personal privations in doing so. It was a landmark event that provides the inspiration or backdrop to numerous films and TV shows, including Billy Elliot and Pride.

Many commentators, both at the time and subsequently, emphasized the ideological battle that took place between the mineworkers’ union president, Arthur Scargill, and Margaret Thatcher. But, as recent studies of Scotland and south Wales show, striker solidarity was not dependent on Scargill. It was driven by the determination of miners and their families to protect their livelihoods and that of the entire coalfield community.

For the communities in what were now rapidly becoming the former coalfields, the predominant experience was one of widespread unemployment and the problems associated with this. A report published by Sheffield Hallam University in 2014 concluded: “The coalfields have significantly above-average levels of deprivation. … The miners’ strike of 1984–1985 may now be receding into history but the job losses that followed in its wake are still part of the everyday economic reality of most mining communities. The consequences are still all too visible in statistics on jobs, unemployment, benefits, and health.”

With the closure of Kellingley Colliery, this iconic industry may have now finally disappeared—but its legacy is still very much with us.

From a historical perspective, the irony about the demise of deep mining is that the U.K. remains reliant on coal. Even in 2015, coal provided 20 percent of Britain’s total energy requirements. The major difference being, of course, that the vast majority is now imported from overseas, having been transported halfway around the world.

In terms of its rise and fall and the dramatic crises that it triggered, coal has been central to the 19th and 20th century history of Britain. Despite the industry’s zenith in the U.K. being a century ago now, its decline continues to cast a shadow over the former coalfield regions. With the closure of Kellingley, this iconic industry may have now finally disappeared—but its legacy is still very much with us.

Ben Curtis is a lecturer in modern Welsh history at Cardiff University in the U.K. This article was previously published on TheConversation.com.