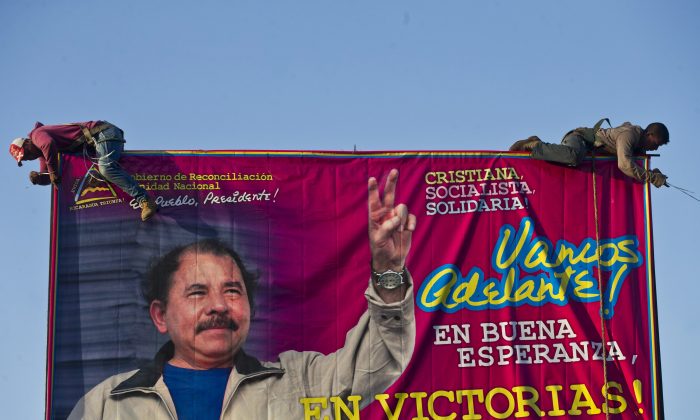 Workers install a billboard supporting Nicaragua's President Daniel Ortega along a street in Managua, Nicaragua, on Dec. 21, 2015. The opposition claims the presidential election in 2016 was a fraud as Ortega demonstrates many facets of a classic Latin American dictator. (AP Photo/Esteban Felix)
Americas

The Life and Crimes of Daniel Ortega

Nicaragua has again appeared in international news after the nation’s authoritarian government killed at least 47 protesters in April. Protests continue, but news coverage forgets that violence and illegality are standard procedure for the regime leader Daniel Ortega and his socialist clique.

The rise of Ortega, from Marxist guerrilla to Nicaraguan president, is a warning for nations grappling with their own terrorists, such as Chile and Colombia. It shows how the vulnerabilities of democracy and why we should limit state power.

The Rise of Ortega

Ortega’s political ambitions began with the Sandinista National Liberation Front (FSLN), where he became a terrorist leader determined to overthrow then-President Anastasio Somoza. The young guerrilla’s first FSLN crime was bank robbery, but that was nothing compared to what was to come.

The FSLN guerrillas were united less by ideology than by their hunger for power, hunger that continues in the rebranded political party. The purported hero of the Sandinistas, Augusto Sandino, was a conflicted, dishonest man, a wannabe liberator who followed the Marxist-Leninist dictum that the ends justify the means.

Ortega and his comrades continued with that mentality, and they didn’t let the will of Nicaraguans impede their pursuit of power. In fact, Ortega got his prison release as part of a ransom deal and then received guerrilla training in Cuba. The FSLN also took the entire Nicaraguan Congress hostage for a second ransom shakedown.

Although Somoza’s tenure was to end at the scheduled 1980 election—which never occurred—the FSLN recruited  combatants and overthrew the Nicaraguan government in July 1979. They wanted a Fidel Castro-style dictatorship, with Ortega at the helm, and they received funding and tactical support from the Cuban and Soviet communists. U.S. President Jimmy Carter also blocked trade and weapons shipments to the legitimate government, leaving Somoza strapped for cash and defenseless.

The unnecessary war from the FSLN brought the deaths of tens of thousands of people, not to mention crippling poverty from the conflict and communist policies of land confiscation and central planning. More than a million Nicaraguans fled the Central American nation, whose population is now around 6 million.

Unfortunately, the murders didn’t come to an end when Ortega took power. Not only did he trample on civil liberties, but he also funded guerrilla activity in El Salvador and crushed dissent from the Miskito people of the Caribbean Coast. The Miskitos rejected forced relocation and centralized control in Managua, but a brutal military campaign in the early 1980s—including the bombing of villages—saw thousands become refugees in Honduras.

Perhaps the greatest tragedy is that Ortega managed to return to power in 2007, after being ousted in 1990. Older and shrewder, he rigged the 2006 election with money funneled from his socialist ally, the late Venezuelan President Hugo Chávez. The two ran a money laundering alliance, explains Wilber López, national treasurer for the new Citizens for Liberty political party.

Running on the platform of 21st-century socialism, the Ortega spent more than double his nearest competitor on the campaign, and that is just what he reported. He received 38 percent of the vote, which previously would not have qualified for victory but he managed to snatch the office nonetheless He then leveraged his position to remove term limits on the presidency and boot out 16 opponents in the National Assembly.

With overwhelming control of the courts, electoral system, and economy, few can compete with Ortega to unseat him, regardless of whether he is popular or not. Even self-proclaimed Sandinistas oppose him—hence the breakaway Sandinista Renovation Movement—but those who stand in his way face swift and deadly retribution, as protesters have recently learned.

Ortega has built a 21st-century dictatorship and police state with absolute control and “conditional democracy,” explains López. Calling out the farce, many of the opposition candidates that still had legal standing boycotted the 2016 election.

The Sandinista regime of Ortega is looking more and more like a family dynasty, much worse than the Somoza family he overthrew. His wife, the first lady, has been the Nicaraguan vice president since 2017, after being a national spokesman, congresswoman, and culture minister.

Adonis Sequeira, a Managua-based board member of the EsLibertad classical-liberal activist network, explains that the Ortega family have built a mercantilist club to garner political patronage—also known as clientelism. They dish out precious government contracts to cronies, with financial aid from Bolivarian Alliance members such as Bolivia, Ecuador, and Venezuela.

This model, Sequeira says, is not new; Nicaragua already had centralized business operations vulnerable to corruption. Regular businesses “simply keep their distance from politics and have decided not to confront Ortega directly, to maintain open dialogue and approval for the laws that apply to their sectors.”

One family member, however, gets excluded from the spoils. Zoilamérica Narváez Murillo is Ortega’s stepdaughter who revealed his sexual abuse against her, which began when she was 11 years old. Although still calling herself a Sandinista, Narváez has been ostracized by her vice-president mother and has joined the defectors who denounce impunity and concentrated power.

At this moment, to quell widespread protests, Ortega has accepted a dialogue process. The prognosis is poor, if we go by the Venezuela outcome, and recent events confirm that Ortega will do whatever it takes to remain in power, including bringing in Russian support. Sequeira believes, for example, that the true number of protest deaths is around 70 since many people have disappeared.

Regardless, he and fellow young activists want a peaceful solution. They hope the dialogue can garner an end to the politically motivated murders and some space for reclaiming institutional powers and the rule of law. That could open the door for Ortega’s departure, constitutional limits on the presidency, and decentralization of the judicial branch.

Sequeira’s uphill quest underlines the importance of avoiding these quagmires, to begin with. A leopard doesn’t change his spots, and Ortega remains a brutal Marxist terrorist down to the bone. He gets what he wants by force, and he leans on other tyrants for support.