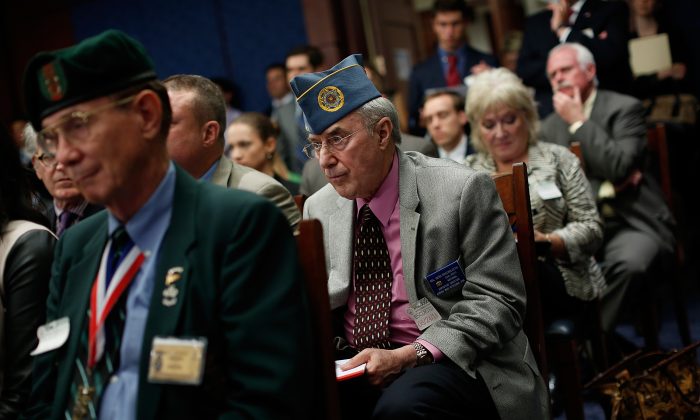 The Lesson Congress Should Learn From the VA Scandal

Like other federal scandals before it, the mess involving VA hospitals has followed a well-trod path. First comes the revelation of misdoing. Then comes the reaction: a shocked public, an administration on the defensive, grandstanding members of Congress. Finally, major reform bills get introduced, debated, then put aside when the heat dies down, or the target agency gets more money thrown at the problem.

With the VA, we’re at the reform part of the cycle. The House and Senate have each passed their own legislation to fix the VA’s health system, including a massive infusion of money—at least $50 billion a year—to allow veterans to seek private health care. Fiscal watchdogs are crying foul, and the measures have ignited a furious debate over whether Congress should cut other programs. In its rush to address public outrage, Congress is proposing dramatic changes that could have benefited from more thorough consideration.

The irony is that this need not have happened—not with the VA, nor with the IRS or FEMA, or any of the other cases in recent years where the federal bureaucracy proved to be dysfunctional and Congress rushed in with a half-baked fix. Mostly what is needed is for Congress to do its job properly in the first place.

This means exercising its oversight responsibilities and catching problems before they mushroom. Diligent oversight can repair unresponsive bureaucracies, expose misconduct, and help agencies and departments become more effective. A lot of federal employees are doing good work, including at the VA; Congress needs to encourage that work while ridding the government of shoddy practices.

To do this, it first needs to know what’s happening. Each committee and subcommittee with oversight responsibility should be keeping track—on a close, even intimate basis—of the department and agencies in its purview. Performance, budget, personnel, management challenges, and major and minor problems: members of Congress ought to be experts on them all. They should also listen carefully to their constituents and interest groups focused on the performance of a particular agency, which are often in a position to give Congress valuable information.

Understanding the facts, working cooperatively with the federal agency, and anticipating problems is a far more useful approach than Congress’s usual pattern of throwing up its hands at a scandal and blaming everyone else for the problem. The crush of demand for VA services in the wake of two wars was easily foreseeable. Had Congress been on its toes, it could have reacted to it.

Congress must also get serious about reforming the federal bureaucracy. It needs to be careful not to indulge in bureaucrat bashing, but federal managers do need more flexibility with personnel systems than they currently enjoy. Federal employees deserve to feel they’re being listened to, respected, and treated fairly, but management also must have flexibility to hire and fire, and to handle personnel problems proactively. Congress also has to insist that these agencies are training, recruiting, and retaining the necessary talent.

These are immense agencies. The VA is the nation’s largest health care system. In 2012, it dealt with 83.6 million outpatient visits. Its proposed budget for 2015 is $164 billion, and it employs more than 300,000 people. This is work on a scale most of us can barely imagine. Mistakes are bound to happen.

This may be an argument for thoroughgoing administrative reform, but it is also a fact Congress can’t ignore: if it wants federal agencies to work better, it has to work tirelessly to understand problems and address them before they explode. Does the agency have adequate resources? How can it control bloat and tighten the gap between the people at the top and people on the front line? Are there problems that need addressing right now? Congress cannot eliminate politics from this oversight process, but politics should not drive the whole oversight enterprise.

The point is that many failures of the federal bureaucracy can be avoided with robust congressional oversight. It’s a crucial part of improving the performance of government, and Congress has a duty to get ahead of problems, not lag constantly behind. Unless it’s willing to accept its responsibility for diligent oversight, the next scandal is only a matter of time.