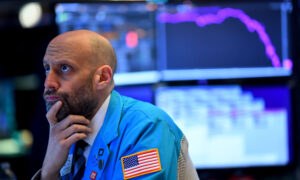 Is This the End of the Current Financial Markets?
0

The Day After: What Does Post-CCP Virus US Economy Look Like?
0
China Business & Economy

The Legitimacy of the CCP Is Questioned by Century-Old Debt

A series of bonds issued by the Qing government a century ago are once again questioning the legitimacy of the Chinese Communist regime that is now in a difficult dilemma it can not get out of. The market value of the bonds is worth $1.6 trillion USD, and if the CCP wants to prove itself to be the legitimate government of China, then it has to pay back these bonds. If the CCP refuses to acknowledge this debt, then it must recognize that the Republic of China (Taiwan) as the legitimate government of China.

Recently, Americans who hold the “Hukuang Railway Bond”—issued by the Qing Dynasty to the United States, Britain, France, and Germany to raise funds for the construction of the Hukuang Railways that runs from Hunan to Guangzhou—initiated a movement demanding the Chinese Communist Party repay the debt. The chairman of the American Bondholders Foundation (ABF), Jonna Bianco, said: “These bonds were originally issued under the Republic of China, what we know today is Taiwan. And the Communist regime who went in and took over mainland China and became the official government in 1949. It becomes their responsibility to honor this debt. The CCP, the Chinese Communist Party’s debt, just as they paid Great Britain in 1987 for the very same bond. It is the successor of government doctrine.”

However, the CCP has always refused to cash in on bonds held by Americans. It selectively defaulted, deliberately not repaying the money owed to American investors.

As early as 1973, before the establishment of diplomatic relations between the United States and China, the U.S. representative told the CCP during negotiations that although the debt does not have to be repaid immediately, the U.S. will not exempt it. Although the CCP government claims to be the only legal government in China and has the right to inherit the sovereignty of Hong Kong left by the Qing government, it does not recognize the right to inherit the “Hukuang Railway Bonds” issued by the Qing government.

Bianco said that the previous U.S. administrations did not attach any importance to the issue of the Huguang Railway bond, but President Trump is different from them. “Thank God for President Donald J. Trump, who is listening to this issue. I have met him personally. He has committed his support behind this issue. He is the only president that has held China accountable to play by the same rules, to have fair trades, to have as he said perfectly, reciprocity, and that’s what Americans expect, that’s what the world expects,” she said.

According to data from the US Treasury Department, as of May 2020, the CCP holds US $1.08 trillion in US Treasury bonds. Bianco suggested that the Trump administration exchange bonds with the CCP, that is, use the Hukuang Railway Bonds to repay the U.S. Treasury bonds held by the CCP. Bianco said that she is confident that this matter will succeed.