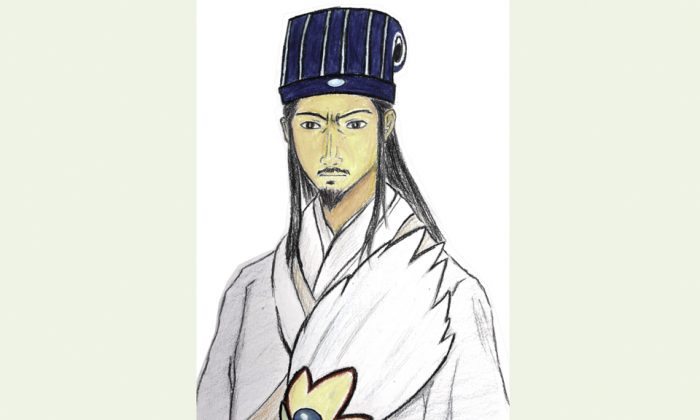 The Legend of Zhuge Liang Seeking a Wife

When Zhuge Liang was about 17 to 18 years old, he went to Wolong Gang in Nanyang City, Henan Province, and built a thatched cottage. There, he ploughed the field and studied hard.

A squire named Huang Chengyan lived under the Wolong Gang Ridge. He took a liking to Zhuge Liang when he saw that Zhuge was a wise and upright person, and he often visited Zhuge. As Huang was very knowledgeable, Zhuge looked up to him. He often sought Huang’s advice and asked him to go through his writings.

It was only after some time that Huang decided to offer his daughter’s hand in marriage to Zhuge. Zhuge did not accept the offer, since he had heard that Huang’s daughter was ugly, but neither did he reject it upfront. The marriage proposal was shelved.

From then on, Huang and Zhuge only shared their knowledge, and not a word about the marriage proposal was mentioned when Huang visited Zhuge.

One day, Huang said to Zhuge, “I often visit you, but you never call on me.”

Zhuge responded: “Please forgive me for being impolite. I’ll visit you the next time.”

A few days later, Zhuge indeed called on Huang. When he told the guard at the door who he was, the guard said: “The squire has given the instruction that if Master Zhuge is here, he should be led into the house right away. Please come in!”

Zhuge stepped inside and saw that the second door was closed. He knocked gently on it twice, and it opened. After he went in, the door closed automatically. Zhuge could not help feeling strange.

Just when he was going to look around, he suddenly heard a sound, and two dogs ran toward him. The dogs, one jet black and one white as snow, barked and lunged at him. Zhuge wanted to turn back, but the door would not open. He panicked as he tried to dodge the dogs.

At that moment, a maid ran out and patted the dogs’ heads. They immediately sat still. She then twisted their ears, and they ran off behind the flowerbeds. Filled with curiosity, Zhuge followed them to take a closer look. He realized they were made of wood and covered in dog skin. He asked the maid who had invented the mechanical dogs, but the maid just smiled and ran off.

Zhuge walked further into the house. When he came to a third door, two tigers ran out and lunged at him. Zhuge thought, “They are probably fake too.” He patted on the tigers’ heads, but to his surprise, the tigers pounced on him with opening mouths.

The tigers pinned Zhuge down tightly and refused to release him. Just then, the maid came over again and said: “You are trying to be smart. How could you use the way you deal with dogs to deal with the tigers?”

As she spoke, she patted their bottoms, and they sat still.

Zhuge felt embarrassed and sighed. “It’s so difficult to enter this huge courtyard. Please show me the way in!”

Zhuge saw a mill with a wooden donkey running in circles. He was dumbfounded. He exclaimed: “Ah! I only know that Master Huang is knowledgeable. I’m surprised he can make this!”

The maid laughed and said, “Master doesn’t care about this!”

Zhuge asked anxiously, “Who is it if it’s not the squire?”

“Please enter. You will find out,” the maid replied.

Zhuge thought: “Each time I open a door, I’m greeted with a new device that causes me a lot of trouble. What should I do?”

As he hesitated, the door opened, and out came a lady. The lady was tall with a gentle and dignified demeanor, except that her face was slightly dark and had a few pockmarks.

She came to the passageway and asked the maid, “Who is this guest?”

Before the maid could reply, Zhuge bowed and answered: “I’m Zhuge Kongming* from Wolong Gang. I’m here to pay a visit to Master Huang!”

“Please enter!” the lady said immediately, and then she turned back in.

The maid saw that Zhuge was still rooted to the ground, and she urged him: “Follow her! The door has opened, and the lady will stop all things from coming out. Nothing will come out and scare you again!”

Zhuge proceeded with caution. After he turned a few corners and entered a few more doors, he finally came to a building.

Huang led Zhuge upstairs, and when they finally sat down, Zhuge could not wait to find out the inventor of those devices. He said, “It’s not easy to visit Master!” He then told Huang what had just happened.

Huang laughed loudly and said: “That ugly daughter of mine is always working on such stuff. It’s disrespectful to frighten you!”

Upon hearing Huang’s explanation, Zhuge blushed and started grumbling to himself: “Zhuge Liang! You are so muddle-headed. The squire offered his daughter’s hand in marriage, but you despised her ugliness. Where could you find such a person who is so extraordinarily talented? Where’s the ugliness?”

At that moment, he blurted out, “Miss Huang’s wisdom exceeded the rest, and I admire her very much!”

Huang said, “My daughter is very ugly. I’ve tried to offer her hand in marriage to someone, but …”

Before Huang could finish, Zhuge said, “I’m here specially to visit my father-in-law!”

With that, he kneeled down and kowtowed to Huang.

Huang laughed and helped him up.

Zhuge and Lady Huang eventually got married. They helped and learned from each other. It was said that many of Zhuge’s ideas came from his discussions with Lady Huang.

In ancient books and legends, there were stories of Zhuge’s invention—a wooden ox that could walk on its own by maneuvering the gears. In the Romance of the Three Kingdoms, there was a description of Zhuge using seven-star lamps to extend his life. There was also a story of Zhuge praying for the Eastern Wind.

Miss Huang made moving dogs and tigers with wood. The ancient books also recorded that Lu Ban, a great carpenter, created a wooden bird that flew in the sky for three days and three nights.

Science in ancient China was very advanced and went beyond modern science. Since the divinely imparted culture was passed down by deities to humans, it carries supernatural power that is beyond the reach of modern science.