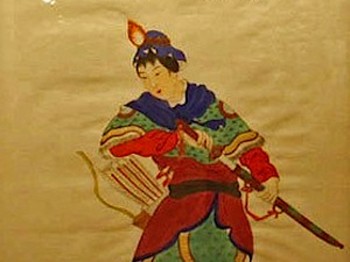 The Legend of Mulan

No other woman in Chinese history has inspired more admiration than Mulan, who is considered an embodiment of loyalty and filial piety. The ancient story of Mulan enlisting in the military on her aging father’s behalf is one of China’s most treasured legends and included in every Chinese school textbook. The story has also become quite well known outside China through a Disney animation film that has popularized this celebrated Chinese heroine.

Mulan was an actual person. Her last name was Hua. She was born in a small rural village in northern China, and purportedly lived from 581 to 618 AD during the Sui Dynasty, though other records place her between 386 and 534 AD, during the Northern Wei Dynasty. While the dates may be disputed, her story is unequivocal.

Mulan’s father was a soldier and raised Mulan like a boy. She not only learned weaving and embroidery from her mother, but also practiced martial arts, equitation, archery, and fencing with her father. In her spare time she liked to read her father’s manuals on military strategy.

In those times, the northern nomadic tribes often harassed the mainland south, pillaging and killing anyone who got in their way, even women and children. Therefore the emperor sent out a decree to form an army and draft recruits from all over the land to put down the hostilities along the northern borders. According to the decree, all male adults were to register, and that included Mulan’s elderly, ailing father.

As Mulan thought of her father going to war, she knew he would likely die, and die in vain. But if he refused to go, he would be branded as being unpatriotic. Mulan’s brother was still too young to enlist, so Mulan made up her mind to disguise herself as a man, and take her father’s place in the army.

At first, Mulan’s parents were against her plan, but Mulan persisted. National interests were at stake, and loyalty to the country was considered a higher order of filial piety.

When Mulan set off on horseback to the frontier, her family sent her off at the outskirts of their village. In order to not have her true identity discovered, Mulan had to be very careful at all times. She made sure she was never left behind by her troop during the day, and at night she slept with her clothes on. Mulan trained very hard, forgoing all her feminine qualities and needs, so that no one would question her gender. For 12 years Mulan served in the army and received numerous honors.

After the war was ended, the emperor wanted to award her an official position, but she declined and asked for a good horse instead as she wished to return home to her family. Her wish was granted, and the emperor also sent an envoy to escort her home.

Her parents were overjoyed to learn of their daughter’s return and went beyond their township to welcome her home. But when they saw an awe-inspiring general riding toward them, they didn’t recognize their own, long awaited daughter.

Mulan’s brother prepared a grand feast in her honor, and after she had cleaned herself up and changed into her female attire, it was her escorts’ turn to be stunned, for the unassailable warrior, who had fought side by side with them for 12 years, turned out to be a woman.