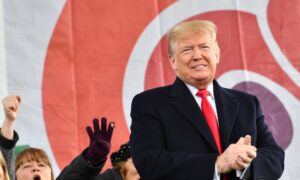 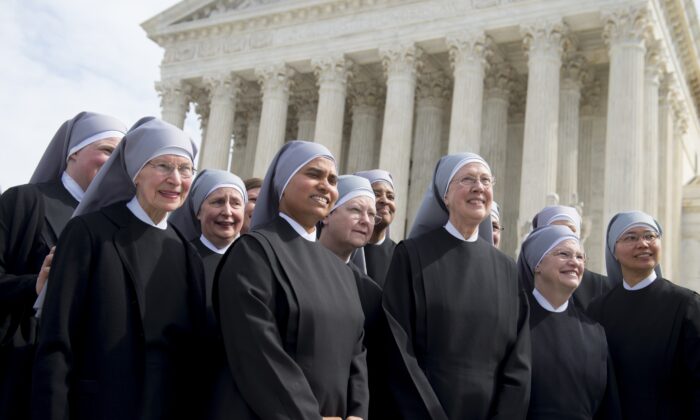 Members of the Little Sisters of the Poor stand outside the Supreme Court following oral arguments in seven cases dealing with religious organizations that want to ban contraceptives from their health insurance policies on religious grounds in Washington on March 23, 2016. (Saul Loeb/AFP via Getty Images)
Viewpoints

The Left’s Plot to Destroy Freedom of Religion

Supreme Court Justice Frank Murphy once wrote that freedom of religion has “a double aspect—freedom of thought and action.” In other words, to be truly religiously free, one must not only be free to believe, but act in the public square consistent with those beliefs.

If this is true—and I believe it is—then freedom of religion has rarely been under greater threat than today. Oh, sure, the right to the “free exercise of religion” is still in the First Amendment. But because of a 1990 Supreme Court case, it’s almost impossible to prevail in a constitutional claim that one’s freedom to act according to one’s faith has been infringed by a law or regulation.

That case—Employment Division v. Smith—involved two Native Americans denied unemployment benefits after being fired for ingesting peyote during a religious ceremony. The court ruled that punishing them didn’t violate their freedom of religion because the drug laws of Oregon were “of general applicability.” Since the law was not aimed at chilling the litigants’ faith practices, the First Amendment hadn’t been infringed.

Laws of general applicability can infringe upon the religious beliefs of millions without having that explicit purpose. Thankfully, there was a statutory remedy. In an overwhelmingly bipartisan vote—unanimous in the House of Representatives—in 1993, Congress passed and Democratic President Bill Clinton signed the Religious Freedom Restoration Act (RFRA).

Under the RFRA, once a litigant demonstrates that a law infringes against the litigant’s ability to act or refrain from acting based on bona fide religious beliefs, the state must show both that a compelling state interest is furthered by the law and that the method selected by the government to accomplish the goal was the least restrictive to religious liberty practicable.

The RFRA worked in the Hobby Lobby case, which protected Christian owners of a retail company from being forced to cover abortifacient contraceptives in their health insurance policy, as required by the Affordable Care Act.

Cases such as Hobby Lobby infuriated the political left, which now opposes the RFRA specifically, and Murphy’s vision of freedom of religion generally. Rather than protecting liberty, these activists believe freedom of religion has become an excuse for invidious discrimination against the LGBT community and women who seek abortions.

The left has vowed to emasculate the RFRA as soon as it controls the federal government. Toward this end, Democrats introduced the “Do No Harm Act”—notably co-sponsored in the Senate by vice presidential candidate Kamala Harris—which would repeal the RFRA in all but name only.

Specifically, the legislation states that the RFRA “should not be interpreted to authorize an exemption from generally applicable law that imposes the religious views, habits, or practices of one party upon another.”

This means, say, that if federal law ever requires all employers to purchase health insurance covering abortion, a religious employer opposed to abortion based on faith would be unable to opt-out because it would be interpreted as imposing the owner’s religious views on employees.

The proposal also would prevent the law from authorizing an exemption from generally applicable law that imposes “meaningful harm, including dignitary harm, on a third party.” The term “dignitary harm” means hurting feelings or making one feel oppressed or of lesser value, an entirely subjective concept. A so-gutted RFRA would offer less protection for religious freedom than the Supreme Court’s current minimalist interpretation of the free exercise clause.

Washington is one such state. In 2007, the state’s Board of Pharmacy—at the prompting of the governor and Planned Parenthood—promulgated a regulation requiring pharmacies to stock and dispense all FDA-approved medications.

Stormers Inc., a Christian-owned pharmacy chain, sued for an opt-out from carrying the “morning-after pill” because of studies that indicate it might act as an abortifacient. The trial judge found that the rule violated the religious liberty of Stormers by requiring religiously opposed companies “to choose between their First Amendment rights and their ability to provide for their families.”

But the 9th Circuit Court of Appeals reversed because the regulation applies “neutrally” to all pharmacies. The Supreme Court refused to hear the case, a decision that dissenting Justice Samuel Alito, called “an ominous sign” for religious liberty.

The patient sued based on California’s Unruh Act, which prohibits discrimination based on sexual identity. The case was dismissed at the trial court on the basis that the hospital was legally following its faith principles. But a Court of Appeals reinstated the case to the active docket, ruling that “any burden the Unruh Act places on the exercise of religion is justified by California’s compelling interest in ensuring full and equal access to medical treatment.”

And, since the law is one of general applicability, it means that a Catholic hospital may have to pay millions in damages for faithfully following Catholic moral teaching.

If RFRA is gutted at the federal level, the same fate that faced Stormers and faces Dignity Health awaits religious believers and institutions nationwide—meaning that creed-motivated philanthropic and service organizations such as the Salvation Army, Catholic Charities, and religiously sponsored schools, hospitals, nursing homes, pregnancy counseling centers, etc.—will be placed at great risk.

That would not only make our society much less free but could materially harm the millions of people whose lives are immeasurably benefited if these charitable institutions shut their doors rather than violate their faith beliefs.