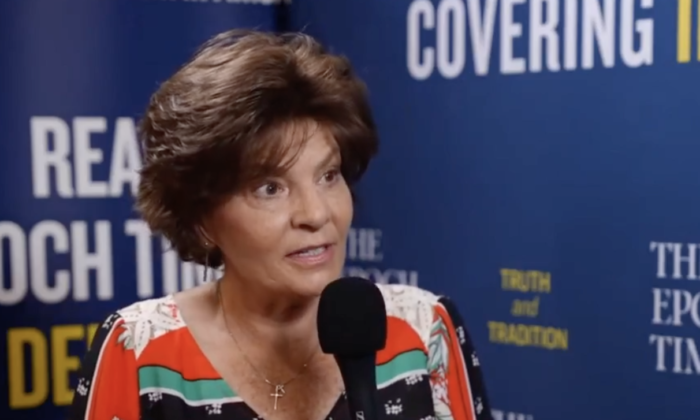 US not ready to 'transition' to renewables
By Masooma Haq

Rep. Yvette Herrell (R-N. Mex.) said the Biden administration is doing everything to reverse the policies of the Trump administration, and trying to upend the country, including waging a war against America’s fossil fuel industry, whose technology allows it to provide cleaner and less-expensive energy than most other nations.

“It feels as though we are watching an administration and progressives that are trying to dismantle our nation, and we are weakening ourselves,” said Herrell.

“But you have to wonder, is it that they hate President Trump so much that they’re undermining everything he ever did that was helpful for America? Or do they just hate America so much that they’re willing to put us into a position of government reliance?” Herrell said during an Aug. 5 interview on Epoch TV’s Crossroads program.

Herrell said the Biden administration’s energy policies will benefit environmental special interest groups and foreign countries and are not about protecting the environment. If they were about the climate, why would we import fossil fuel from countries that cannot produce energy as clean as we can? she said.

“But if it’s really about climate, and doing what is right, well, why aren’t we then utilizing our environmental regulatory processes” to produce enough oil in the United States, said Herrell. “American energy is cleaner than the next seven countries combined,” she added.

U.S. Not Ready for “Transition” to Clean Energy

“So, right away, it tells you, if we’re going to be honest about this, it is not about climate—but it’s a good talking point for them, and this ‘transition,’ we’re not going to transition, we don’t have the infrastructure to transition as fast as they want to.”

“[When] it comes to the gas prices, we’re going through an incredible transition that is taking place that, God willing, when it’s over, we’ll be stronger and the world will be stronger and less reliant on fossil fuels when this is over,” President Biden said during a May press conference at the White House.

Because domestic production has decreased, but demand has increased, gasoline prices rose 48% from January 20, 2021, to right before Russia invaded Ukraine, and diesel prices increased 49%.

The technology for green energy production is not developed and reliable enough to provide the amount of affordable energy Americans need, said Herrell. As in the case of the early cell phones, “We had to wait for the technology and for the price and for the right time. They’re not willing to do that with the energy sector.”

Although the Biden administration just earmarked $369 billion for the climate crisis to develop renewable energy like solar and electric vehicles, most people cannot afford these upgrades, and we are headed toward the same energy crisis as Europe, said Herrell.

“They [Europe] weren’t ready for it, it didn’t work, and now they have some of the highest utility costs in the world. They just aren’t there yet,” said Herrell. “If we’re going to talk about renewables, then let’s talk about everything from the development stage to the disposal stage.”

Democrats’ justification to end the use of fossil fuels is misguided and dishonest, said Herrell.

She introduced the Wildfire Prevention and Drought Mitigation Act legislation that would help prevent catastrophic wildfires in drought-affected forest communities, by helping to “streamline the NEPA [National Environmental Policy Act] process,” she said.

“I can’t even get a Democrat to say, You know what, that’s a great idea. This would save our watersheds, it would clean up the forest, the forest floor, but it would also save on these catastrophic wildfires we’re seeing everywhere. Now think about the emissions from those fires going into the atmosphere,” said Herrell.

“They’re very good at just sounding the alarm on certain … trigger words, but they actually don’t follow through with any real meaningful conversation.”

U.S. fossil fuel industry provides us and our allies with a fuel source that is reliable and abundant, but is being demonized by the Biden administration in the name of climate change.

“It’s really unfortunate that we’re going to vilify the most important industry, in my opinion, to this entire nation. I mean, it touches everything,” said Herrell. Beyond gas, and producing food, the fossil fuel industry is key to producing hundreds of other everyday items, from clothes to medical supplies.

“When you look at the big picture, this is our farm to table. This is products to stores, this is a supply chain issues. This is an energy crisis that affects every single American.”

Instead, the left is weaponizing the climate and has been able to push a narrative about the environment because they control the mainstream media, Herrell said. Under the Biden administration, the government is getting bigger, and voters are frustrated, she said.

“I think Americans are going, wait a minute, you know, we want our country back. We want to be in a safe neighborhood. We want to be prosperous and make sure our kids have something to inherit from us as a nation and, right now, it is scary to think what they’re doing to the bedrock of this nation.”