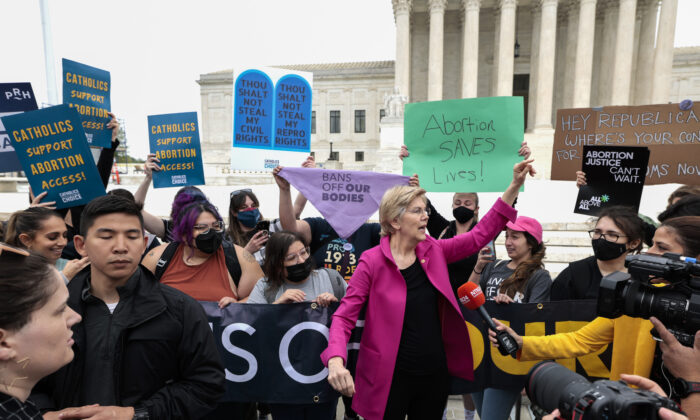 Sen. Elizabeth Warren (D-Mass.) speaks to pro-abortion demonstrators outside of the U.S. Supreme Court Building in Washington, on May 3, 2022. (Anna Moneymaker/Getty Images)
Viewpoints

The unauthorized leak of Justice Samuel Alito’s draft opinion for invalidating Roe v. Wade was despicable, whether or not it was a statutory crime. Somebody is playing dirty pool.

I just wish one Democrat would have the honor to say, “I always have supported abortion rights, and I always will, but the premature leaking of a Supreme Court justice’s opinion is reprehensible, whether technically legal or not. This break of confidentiality deserves to be punished. Therefore, I will not comment on the apparent decision until it is officially and properly released to the public.”

Sadly, not a single Democrat that I’m aware of took such a principled stand. Instead, they have been trying to outdo each other in scoring political points from the leak. In so doing, Democrats are showing their disrespect for American institutions, the separation of powers, and perhaps the rule of law itself. If they would “cheat” on this issue, why wouldn’t they cheat on elections? They’re not painting themselves in a very flattering light. Their behavior makes it clear that they believe that rules should restrain only the other side.

Just as the progressive mob shunned due process and went after then-nominee and current Supreme Court Justice Brett Kavanagh lynch-mob-style during his confirmation hearings, once again that same savage mob is trying to intimidate Supreme Court justices to influence their ruling on Roe v. Wade. In fact, Justice Alito, the author of the leaked opinion, abruptly canceled his scheduled appearance at a judicial conference on May 5, raising concerns that he (or his family) feared for his safety.

It’s regrettable that some Americans are resorting to desperate measures to oppose the overturning of Roe, because that decision was improper, illegitimate, and ill-conceived from the very start. In stating this, I’m not opining as to whether abortion itself is right or wrong; that’s a hugely important question that I will address in a separate article.

The pro-abortion side thinks that Roe was just and proper, but only because the ruling favored them. They refuse to admit that it was improper for the Supreme Court to have made that call in the first place. Essentially, what the justices did in Roe was to define when life begins. The problem is that the question of when life begins is a question of ontology, not jurisprudence. There are widely divergent opinions about when life begins, so what qualifies judges to make such a pronouncement? Within the framework of our democratic republic, the elected representatives of the people of the various states should make that determination, and not as few as five unelected Supreme Court justices.

Ironically, the reaction of U.S. Sen. Elizabeth Warren (D-Mass.) to the leaked report of Roe’s imminent demise underscores the point that the abortion issue shouldn’t be decided by the Supreme Court. The self-described “furious” senator said, “I am angry because an extremist United States Supreme Court thinks they can impose their extremist views on all the women in this country.”

Well, in 1973, when the Roe decision was rendered, the shoe was on the other foot. Millions of Americans were upset then with what they viewed as the Supreme Court imposing extremist pro-abortion views on all the people in the country. Both sides should agree that it’s not the Supreme Court’s prerogative to decide to what extent abortion should be legal. Again: Leave this decision to the people and their elected representatives.

The Roe decision was problematical not just due to the presumption of the Supreme Court ruling on a question that was above their pay grade (i.e., when does life begin?) but also due to the contortions that some justices went through to construe a tacit constitutional right to privacy that in turn includes the right to obtain an abortion.

Maybe, if Roe is indeed overturned, the court can come to a more straightforward treatment of the right of privacy. Privacy doesn’t lurk wraithlike in the penumbras of the Constitution. The Ninth Amendment plainly states, “The enumeration in the Constitution, of certain rights, shall not be used to deny or disparage others retained by the people.” Since the right of privacy is not explicitly mentioned in the Constitution, the presumption is that the people have that right. The right to be left alone is a most precious right, as I wrote in this space a few years ago. As Ayn Rand put it, “Civilization is the progress toward a society of privacy. The savage’s whole existence is public, ruled by the laws of his tribe.”

Invoking the right to privacy in defense of abortion is problematical; actually, for those opposed to abortion, such an assertion is a nullity. It could be called “the Jeffrey Dahmer defense.” For those of us who are too young to remember this, Jeffrey Dahmer had the nasty habit of luring men to his abode for a meal, surreptitiously drugging them, and then eating them at his leisure. He did it all in the privacy of his own home, but nobody would say that Dahmer’s right of privacy trumped his victims’ right to life.

Fanned by the mainstream media, the leak of Justice Alito’s draft is going to contribute to growing tumult that will crescendo with the official release of the opinion. If, in fact, the court overturns Roe, there will be acrimonious arguments for quite some time afterward. Prepare yourself for a volatile, highly emotional election year.