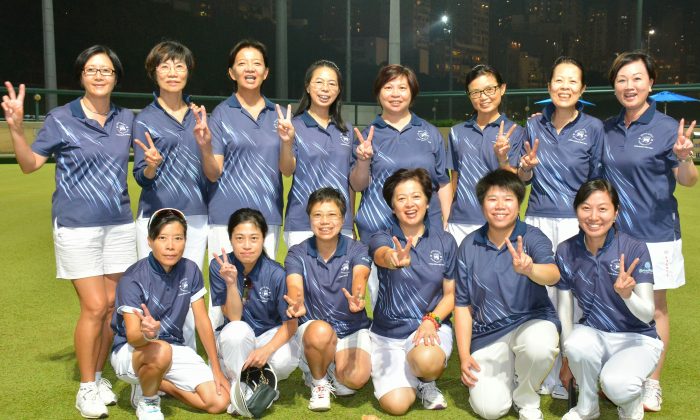 The Hong Kong Football Club ladies team (WPL Division 1 Champions) is looking to set the record again by winning the forthcoming Premier League, which will start this weekend, April 25, 2015. The team has won the last eight competitions consecutively. (Mike Worth)
HK Lawn Bowls

HONG KONG—After a two month break, the new HKLBA league season will officially commence this Saturday, April 25, despite teams in the lower divisions have played their first game last week.

This season a record-breaking 85 teams will participate in the men’s competition. For the women, the 42 teams also represent the highest number of participants since it changed format in 2009.

For the men’s competition, all eyes will be on the new-look Craigengower Cricket Club (CCC), who has recruited a number of elite players in the last few years. Making their debut for the club includes the reigning Bowler of the Year Wong Chun Yat and young bower Lui Chin Hong. They will form a strong team with the other elite players who joined the club last season, including Hong Kong International Simpson Chang and ex-Hong Kong player Lee Ka Ho, to challenge for the honour.

Last term the team had a strong push for the title, which they last won in 1994, but their attempt fell apart in the last few rounds and they only finished seventh. This weekend they will start the campaign against newly promoted Filipino Club at home.

Despite their limited success in the last two decades, they still share the record of winning the most top flight titles with Kowloon Cricket Club (KCC), who won back-to-back titles in 2012 and 2013.

The defending champion Kowloon Bowling Green Club will continue their path without key player Wong, who departed for CCC. Their biggest challenge will be from last season’s runners-up KCC who definitely have the 15th title in their mind.

The two teams fought until the last two rounds last year to decide on the title.

For the ladies, Hong Kong Football Club (HKFC) will continue their record-setting journey with the ninth consecutive title in sight. The team will be boosted by Hong Kong international Celena Kwok and top young bowler Vivian Yip, who won gold medals at the Asian Championship and the Chinese National Lawn Bowls Championship recently.

The other ladies’ news is ex-Hong Kong international Tammy Tham and the reigning Bowler of the Year Rita Tsui will both move to KCC this season. The duo departed HKFC to Club de Recreio (CdeR) in 2013, but were relegated with the team in the same year. The CdeR team narrowly missed promotion last season and need to continue their life in the second tier.

Returning to the first division will be Indian Recreation Club and KBGC who has an instant rebound to the top flight after a short spell at the second division.