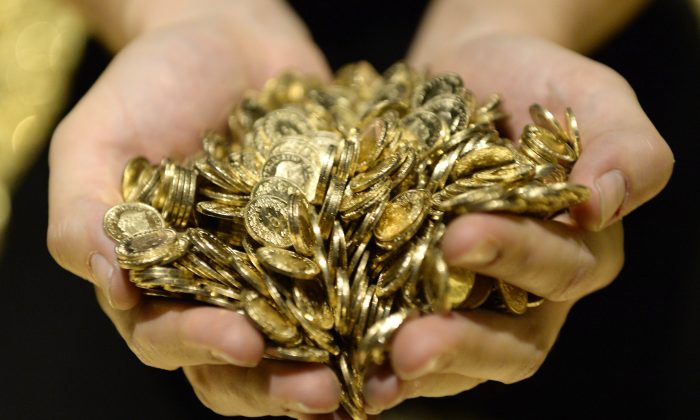 Gold coins during an exhibition in Lenzburg, Switzerland, on Nov. 16, 2014. China is getting as much gold as it can get its hands on as well. (AP Photo/Keystone, Steffen Schmidt)
Business & Economy

Usually China makes the headlines with regard to its crashing real estate and slowing economy. Behind the scenes, however, the country is working hard to become a power players in the gold market.

The reasons are simple. China knows the past growth policies are not working anymore and is not sure how much time it has left before a serious economic crisis. So it is pushing to consolidate and further its power internationally by gaining more influence at the International Monetary Fund (IMF), setting up its own institutions like the Asian Infrastructure and Investment Bank (AIIB).

Gold is an integral part of all these operations and China again moved to improve its position in the pricing and trade of global gold. According to Xinhua, China and other other countries have set up the world’s largest physical gold fund under the tutelage of the Shanghai Gold Exchange, which also wants to create its own gold pricing mechanism.

Sixty countries have already signed up for the project which is supposed to reach $16.1 billion and facilitate central bank purchases for the member countries. The fund will also invest in gold mining projects in central Asia.

This project catches two birds with one stone. First, it brings together many countries in central and South-East Asia which China can influence. Second it adds another layer to China’s alternative system of gold trading. The Shanghai Gold Exchange already has futures trading operations. Once the new gold price fix is established, it will add physical trading as well.

Adding a fund which buys up physical and also invests in gold mining projects gives China access to new markets and also lets it gauge the demand and supply for gold among the member countries. China is the world’s largest producer of gold, as well as its largest consumer and importer. The Chinese have determined that investing in gold as monetary reserves is the only way for the yuan to gain more prominence as a trade and possible reserve currency.