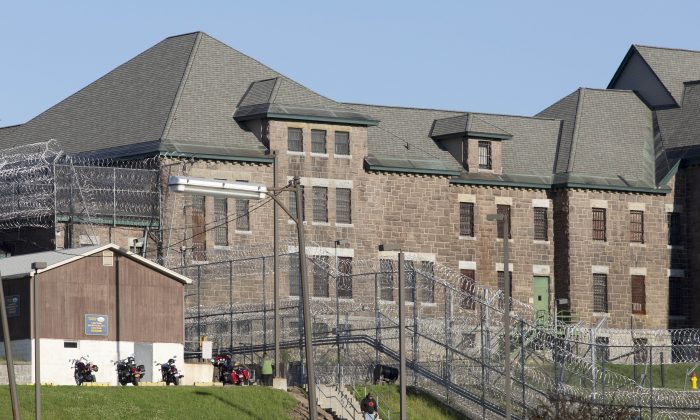 An employee leaves the Clinton Correctional Facility, Wednesday, June 17, 2015 in Dannemora, N.Y. Search teams are back in the woods of northern New York looking for two convicted murderers who broke out of the maximum-security prison a week and a half ago. More than 800 law enforcement officers are in the 12th day of searching for David Sweat and Richard Matt. (AP/Mark Lennihan)
Crime and Incidents

A New York district attorney says the woman charged with helping two murderers escape from a maximum-security prison had discussed with them a murder-for-hire plot involving her husband.

Prosecutors have said Joyce Mitchell agreed to be the inmates’ getaway driver but backed out because she still loved her husband and felt guilty for participating.

The husband of a woman charged with helping two murderers escape from a New York prison is talking to state police.

The Press-Republican of Plattsburgh reports (http://bit.ly/1FmCVbH ) that Lyle Mitchell arrived with his attorney late Wednesday morning at the state police barracks in Malone.

Mitchell’s wife, Joyce, is accused of assisting Richard Matt and David Sweat in their June 6 escape from Clinton Correctional Facility in Dannemora. The two convicted murderers remained at large Wednesday as police continue searching the area.

Prosecutors have said Joyce Mitchell agreed to be the inmates’ getaway driver but backed out because she still loved her husband and felt guilty for participating.

New York authorities have scheduled a news conference to provide updates on the search for two murderers who broke out of a maximum-security prison nearly two weeks ago.

The Clinton County district attorney’s office says Wednesday that the news conference will be held at noon at the County Government Center in Plattsburgh, not far from Clinton Correctional Facility in Dannemora. The DA’s office says no details will be released until then.

David Sweat and Richard Matt remain on the loose for a 12th day since using power tools to cut their way out of their cells June 6.

Hundreds of law enforcement officers have searched the wooded, swampy areas south and east of the prison since the breakout. State police say the search area is now being expanded.