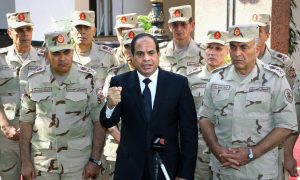 The Latest on Egypt Attack: 4 Wounded in Shootout

The governor of the southern Egyptian city of Luxor, Mohammed Sayed Badr, says that no tourists were hurt in the suicide bombing outside the famed Karnak temple.

He told The Associated Press over the phone that the attack was “an attempt to break into the temple of Karnak. They didn’t make it in.”

Badr says three suspected militants carrying bags got out of a car in the temple’s parking lot. Police were immediately suspicious and ordered them to stop.

One of the three then began running, so the police fired at him and an explosive belt he was wearing blew up. A second man had a gun and started firing at the police before he was shot dead.

The governor says the third man was arrested by an undercover policeman after he was wounded in the exchange of fire. Badr says the nationalities of the three men have yet to be determined.

Egyptian officials say police killed two suspected Islamic militants in a shootout outside the ancient Karnak temple in the southern city of Luxor as a suicide bomber struck meters away from the famed tourist attraction, without killing anyone.

The Health Ministry says four people, including two policemen, were wounded in the gunbattle Wednesday.

The officials say there were only a handful of tourists and Egyptians inside the temple at the time of the late morning attack. The officials spoke on condition of anonymity because they were not authorized to brief reporters.

Luxor is home to some of Egypt’s most famous ancient temples and pharaonic tombs, including that of King Tutankhamun. The city has been hit hard by a downturn in visitors since Egypt’s 2011 uprising.