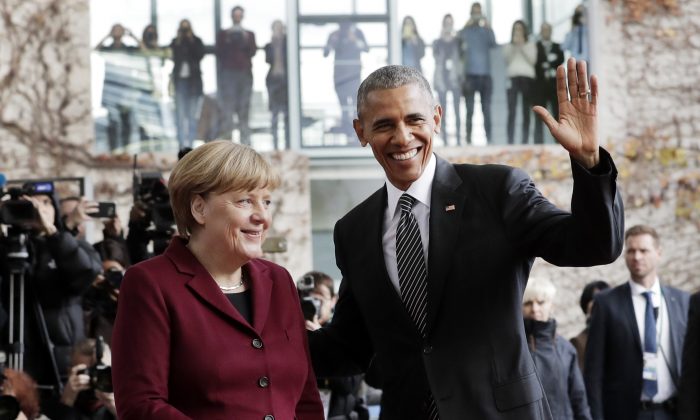 BERLIN (AP) — President Barack Obama used a meeting with key European leaders Friday to urge them to work with the incoming administration of President-elect Donald Trump and to discuss steps necessary to resolve the conflicts in Syria and eastern Ukraine, the White House said.

Obama’s meeting with the leaders of Germany, Britain, France, Italy and Spain was likely his last in such a setting before he leaves office. The session expands on lengthy talks he held the day before with German Chancellor Angela Merkel.

Obama didn’t speak with reporters before departing for Peru on Air Force One. The White House said Obama thanked his counterparts for their cooperation during his two terms in office. He urged them to work on common challenges with a Trump administration on the “basis of the core values that define the United States and Europe as open democracies.”

Since Obama’s arrival on Wednesday on his sixth and last trip to Germany as president, he and Merkel have focused several meetings on issues of globalization and trans-Atlantic cooperation. The talks come largely in the context of what the election of Trump will mean to efforts to seek peace in Ukraine and Syria, the strength of the NATO alliance, trade agreements, efforts to fight climate change, and other pressing matters.

The White House said in a summary of the meeting that the leaders expressed grave concern about the humanitarian situation in Aleppo. They agreed that increased attacks by the Syrian regime and its supporters, including Russia and Iran, should be immediately halted. They also are calling for humanitarian access to the city to be restored.

On Ukraine, the White House said the leaders agreed that sanctions against Russia must remain in place until it meets its commitments to resolving the conflict.

Obama also briefed his counterparts on the progress made in Iraq in liberating Mosul from Islamic State militants. The White House said the leaders agreed on the need for stability after the city is liberated. Obama also encouraged leaders to continue efforts to expand information sharing throughout the European Union to help disrupt terror attacks.

At a news conference with Obama on Thursday, Merkel diplomatically said she was approaching the incoming Trump administration “with an open mind.”

Around the world, many are looking to Merkel—one of the longest serving leaders of a major world power, leader of Europe’s largest economy and one of the biggest U.S. trade partners with the U.S.—for leadership as Obama leaves office.

Obama seemed to underscore that reality as he effusively thanked Merkel for her “deep friendship.” He said he couldn’t “ask for a steadier or more reliable partner on the world stage,” while adding that if she chooses to run again for a fourth term next year, he’d vote for her—if he could.

Joining the two leaders Friday were the heads of countries at the center of many of the European Union’s coming challenges.

British Prime Minister Theresa May is preparing her country for negotiations to leave the trade bloc. Spain’s Prime Minister Mariano Rajoy faces economic woes in his country that have contributed to financial instability in the EU. Italian Prime Minister Matteo Renzi’s already shaky economy has been rocked by tens of thousands of refugees. And French President Francois Hollande’s socialist government faces a major challenge from the far-right in elections next year.

Trump has applauded the British decision to exit the EU, or “Brexit,” and has had meetings with Nigel Farage, leader of the U.K. Independence Party and a key player in the British decision to leave. For his part, Obama said Thursday his hope was that the Brexit negotiations be “conducted in a smooth and orderly and transparent fashion and preserve as closely as possible the economic and political and security relationships between the UK and EU.”

Still, Obama noted that he considered the EU “one of the world’s great political and economic achievements.”