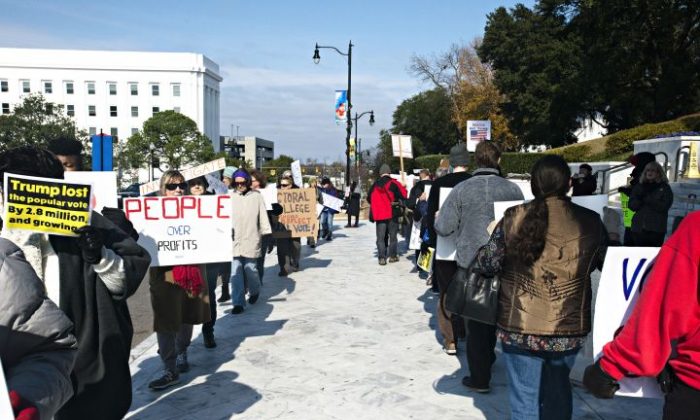 LANSING, Mich.—Michigan’s 16 electoral votes were cast Monday for President-elect Donald Trump, the first time since 1988 that a Republican nominee has captured the state.

Protesters outside the closed doors of the Senate chamber loudly chanted for electors to “vote your conscience” and reject Trump. But in Michigan, electors who don’t follow the state results from the Nov. 8 election are simply replaced.

There was no sign of dissent among the electors, who were 16 Republican Party members picked months ago at a GOP convention. Trump defeated Democrat Hillary Clinton by less than 11,000 votes, the narrowest margin in state history.

Trump “carries the dreams of millions of Michiganders and Americans—Democrats and Republicans and independents alike—on his shoulders,” elector Michael Banerian of Oakland County said in a nominating speech.

The 16 electors each signed a ballot supporting Trump. Separately, they voted for Vice President-elect Mike Pence.

“It was a great feeling of exuberance,” elector Henry Hatter, 80, of Clio, said of signing his name. He was an elector in 1976 when Republican Gerald Ford won Michigan but not the election.

Hatter said he received letters from people who questioned how a black man could support Trump. “I didn’t feel intimidated,” he said.

The Latest: Trump Gets All 6 Electoral Votes in Mississippi

Gov. Rick Snyder chaired the ceremony, which lasted about 40 minutes. He’s the highest-ranking Republican in Michigan but hasn’t disclosed whether he voted for Trump. He said he considers it a private matter.

The Electoral College vote occurred Monday in state capitals across the country. In Michigan, it wasn’t open to the general public. The Senate gallery was filled with people who had tickets from the Republican Party.