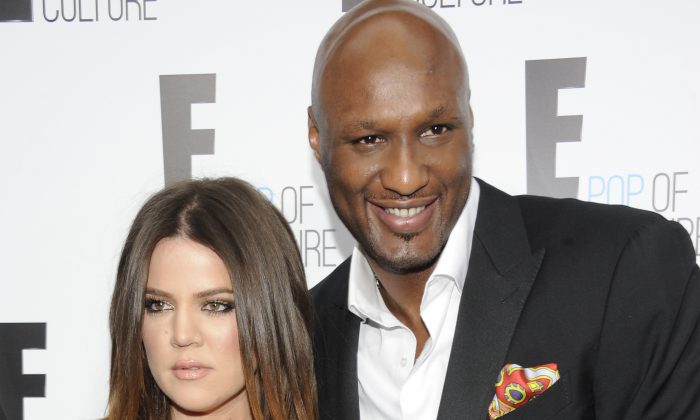 Khloe Kardashian Odom and Lamar Odom from the show "Keeping Up With The Kardashians" attend an E! Network upfront event at Gotham Hall in New York on April 30, 2012. (AP Photo/Evan Agostini)
US

LAS VEGAS (AP) — The latest on the hospitalization of Lamar Odom, who was found unconscious in a Nevada brothel (all times local):

Kardashian posted a message to her website Tuesday thanking the doctors and nurses at Sunrise Hospital and Medical Center. Odom was transported by helicopter Monday from the hospital to the Los Angeles area. His family didn’t say where he was taken in LA.

Kardashian says the family has received strength from the outpouring of support from Odom’s fans.

Odom was found in critical condition at the Love Ranch brothel in Crystal, Nevada, on Oct. 13. He regained consciousness Friday.

A family representative says Lamar Odom has left a Las Vegas hospital and is now in the Los Angeles area to continue his recovery a week after being found unconscious at a Nevada brothel.

The family statement thanks the hospital and Odom’s fans and says he’s making “miraculous” progress.

The statement says he took a few steps in Los Angeles. Alston says Odom’s estranged wife, Khloe Kardashian, his father and his two children from a previous relationship are with him.

Odom was found in critical condition at the Love Ranch brothel in Crystal, Nevada, on Oct. 13. He regained consciousness Friday.