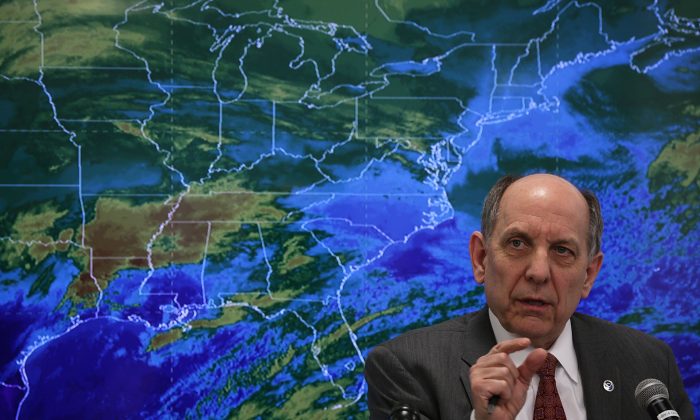 National Weather Service Director Louis Uccellini speaks during a news conference on a winter storm forecast January 21, 2016 at the NOAA Center for Weather and Climate Prediction in College Park, Maryland. A winter snowstorm is forecasted for the East Coast this weekend with prediction of up to 30 inches of snow for the DC area. (Alex Wong/Getty Images)
US

WASHINGTON—The latest on the heavy snowfall expected to hit the Washington area and the Northeast. (all times local)

The National Weather Service director says the ingredients have come together for a historic blizzard—complete with brutally high winds, dangerous inland flooding and even possible white-out and thunder snow.

Louis Uccellini says that the storm could easily cause more than $1 billion in damage and paralyze the Eastern one-third of the nation. He says it has the potential to affect more than 50 million people. Washington looks like the bullseye of the blizzard.

Weather Prediction Center meteorologist Paul Kocin says the blizzard has the potential to be near the top 10 snowstorms in history to hit the East, with the weekend timing and days of warning being a saving grace that could limit death and damage.

He compared this storm to Snowmageddon, the first of two storms that slammed Washington in 2010, dumping up to 30 inches of snow in some places. Forecasters are calling for up to 2 feet of snow in the nation’s capital.

It took an act of Congress, but people are now welcome to sled down Capitol Hill.

With a major blizzard bearing down on Washington, the U.S. Capitol Police on Thursday said they won’t be enforcing — as in years past — a longstanding sledding ban. In legislation that cleared Congress last month, lawmakers instructed the police to not enforce the decades-old ban.

In prior years, sheepish Capitol police officers reluctantly enforced the ban. Last year, however, revelers orchestrated a “sled-in” — with the full support of Washington’s nonvoting delegate, Democrat Eleanor Holmes Norton. The police stood aside, avoiding the embarrassment and bad media coverage that would have come from breaking up the fun.

The police say they’ll still be there this year, but this time they’ll be watching to make sure the kids are having a safe time of it.

D.C. Mayor Muriel Bowser has declared a state of emergency in Washington as a potentially historic blizzard approaches.

The emergency declaration took effect immediately on Thursday afternoon. It will remain in effect for 15 days unless the mayor decides otherwise. It allows the District of Columbia government to request federal disaster aid.

The District of Columbia will also be under a snow emergency starting Friday morning, which means vehicles parked on snow emergency routes will be towed. City schools will be closed Friday, and city government offices will close Friday at noon. The federal government has yet to announce a plan for its workers.

Heavy snow is expected to begin sometime Friday, with forecasts calling for 2 feet or more in the nation’s capital, which would be one of the biggest storms on record.

George Washington’s women’s basketball game against visiting George Mason has been moved to Friday at noon instead of Saturday in hopes of avoiding the heavy snowstorm that is forecast for the area.

Up to 2 feet of snow is predicted from what the National Weather Service is calling a “potentially crippling winter storm,” expected to hit the Mid-Atlantic region starting Friday afternoon and continuing into Sunday.

As of Thursday afternoon, there had been no changes to the weekend’s scheduled games involving the NHL’s Capitals and NBA’s Wizards.

The Capitals are supposed to host the Anaheim Ducks on Friday night, and the Pittsburgh Penguins on Sunday.

The Wizards are slated to play a home game against the Utah Jazz on Saturday.

I love our community! The night before a huge blizzard begins and the library is packed! @ArlingtonVALib

Even President Barack Obama couldn’t escape the rough commute that greeted Washington commuters Wednesday evening when snowy conditions prevented him from returning to the White House via helicopter.

It took the presidential motorcade about an hour and 14 minutes to travel between Andrews Air Force Base and the White House. The distance: roughly 15 miles. Along the way, the motorcade passed four accidents, all appearing to be fender benders with no injuries. When the motorcade was forced to stop, some of the SUVs skidded sideways until a curb kept them from sliding off the road.

The problem occurred as the result of about 1 inch of snow, a potentially bad omen with a much more powerful snowstorm bearing down on the city this weekend.

White House spokesman Josh Earnest said local officials were caught off guard by the storm. In all fairness, the White House was too, considering it didn’t make the call to void the helicopter until the president was on Air Force One coming home from Detroit.

What We Know: Key Takeaways on ‘Potentially Crippling’ Storm

American Airlines is canceling the bulk of its flights in the Northeast ahead of the storm. Snow, ice and strong winds will all cause problems for fliers.

At its Charlotte hub, all 654 American flights are canceled for Friday. The airline will not keep any jets there overnight, with plans to resume flights to Charlotte on Saturday morning.

The three Washington and Baltimore area airports will see flight cancelations starting Friday afternoon with all flights canceled there Saturday.

The only good news for fliers: Saturday is the slowest travel day of the week. There are a little more than 22,000 flights scheduled to, from or within the U.S., according to flight tracking service FlightAware. That’s about 5,000 fewer flights — and 400,000 fewer passengers — than on Thursday or Friday.

All major airlines have issued waivers for travel over the weekend, allowing passengers to rebook onto earlier or later flights to avoid the storms.

Boston is offering help to the District of Columbia with the massive blizzard about to strike the nation’s capital.

Walsh says he’s already spoken to his city’s public works department about lending the snow-blowers to Washington if the storm doesn’t hit Boston hard and they can be spared. So far, forecasters are calling for less than an inch of snow in Boston.

Walsh says he plans to convey the offer to District of Columbia Mayor Muriel Bowser on Thursday.

Walsh’s offer comes a day after a light dusting of snow triggered hours of gridlock on Washington’s streets, raising doubts the city is prepared to handle a much large deluge of snow over the weekend.

A blizzard expected to smack the Mid-Atlantic with up to 2 feet of snow has led country singer Garth Brooks to postpone two concerts in Baltimore.

Concert organizers announced Thursday that the shows scheduled for Friday and Saturday at Royal Farms Arena have been postponed to Jan. 31.

Schools in North Carolina and a legislative session in Kentucky are among the cancellations due to the snowstorm. People all across the East Coast are preparing for anywhere from an inch of snow to up to 2 feet in some places.

u know there’s a blizzard coming when whole foods has sold out of literally everything………… pic.twitter.com/rmn7fbXl73

Maryland Gov. Larry Hogan has declared a state of emergency in advance of a major snowstorm in the forecast for this weekend.

Hogan declared the state of emergency on Thursday. The declaration won’t go into effect until 7 a.m. Friday.

Heavy snowfall is forecast to arrive by the weekend from Appalachia to Philadelphia and maybe farther north. Governors in North Carolina and Virginia and the mayor of the District of Columbia have also declared emergencies.

It was at least the third death from a severe winter storm rolling across the eastern part of the U.S.

Sgt. Joshua Church said that a 60-year-old woman was driving her car in Stokes County near her home around 5:45 p.m. Wednesday when she hit an “extremely icy” patch while driving down a hill. Church said Mary Williams lost control of her car, went down an embankment and turned over in a creek.

In neighboring Forsyth County, Trooper B.M. Bush wrote in a preliminary report that Rosa McCollough-Leake was driving her car near Walkertown around 4:15 p.m. Wednesday when she died in an accident. The 55-year-old slid on an icy roadway, crossed into oncoming traffic and hit a pickup truck head-on.

McCollough-Leake was killed, while her passenger and two people in the pickup had minor injuries.

(Corrects that the deaths were at least the second and third blamed on the storm, not the first.)

North Carolina upcoming Blizzard alert: There is no parking at the Harris Teeter. Don’t even try!

Many people in the Washington region were so focused on this weekend’s big snowstorm that when an inch of snow fell Wednesday night, the city was caught off guard. The untreated roads led to messy, hours-long commutes.

District of Columbia Mayor Muriel Bowser took the unusual step of apologizing for her administration’s response to the minor storm. She said crews should have been out earlier with more resources.

Arlington County officials said the region “underestimated” the storm and it was a “scary and frustrating night” for residents.

The National Weather Service issued a winter weather advisory that warned of an inch of snow during the evening rush. The blizzard expected Friday could dump as much as 2 feet of snow on parts of the region.

Virginia Gov. Terry McAuliffe has issued a state of emergency ahead of an upcoming winter storm that threatens to bring heavy snowfall to the Washington area and the Northeast.

Thursday’s declaration authorizes state agencies to assist local governments in response to the storm, which is expected to dump up to 2 feet of snow in parts of the state and bring strong winds.

McAuliffe says in a statement that residents should “take the threat of this storm seriously.” He says that includes travel disruptions and possible power outages.

He says transportation crews are treating roads before the storm hits.

Virginia Transportation Secretary Aubrey Layne is urging residents to stay off roads until the storm passes.

A light snowfall during evening rush hour that was more intense than expected led to icy gridlock throughout the Washington area with backups that lasted through the night in some areas.

Treated roads are clear Thursday morning, but some elevated roads, ramps and side streets are icy with drivers inching along.

Virginia Department of Transportation spokeswoman Jennifer McCord says in northern Virginia minor accidents built to gridlock and ramp closures continued through the night. She described, “a long night for a lot of people trying to get home.”

Heavy snowfall is predicted by the weekend from the Appalachians to Philadelphia and maybe farther north.

The National Weather Service has issued a blizzard watch for New York’s Long Island starting Saturday morning as the Washington area and the Northeast brace for heavy snowfall.

The watch means there’s potential for 8 to 12 inches of snow, northeast winds 25 to 35 mph and temperatures in the lower 30s.

With heavy snowfall predicted by the weekend from the Appalachians to Philadelphia, people throughout the region readied themselves for blocked roads, power outages and canceled flights.

The National Weather Service said Wednesday that 12 to 16 inches of snow could come down between Friday night and Sunday morning around the Interstate 95 corridor. As much as a foot of snow is possible for Philadelphia’s northern suburbs.

How you know that blizzard days are like Black Friday for the bread industry… #dcsnow pic.twitter.com/q5BKpt9VCC